Sail Around the World in an Eight-footer?

In early 2007, I plan to drive the mule-drawn “Captain Bernie’s Lost Sea Expedition” wagon from Mexico to Canada. 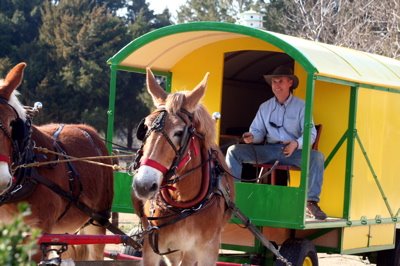 Why? Because I want to explore the sea bed of a vanished ocean, the Great Interior Seaway, that covered the Great Plains 75 million years ago

Ok, I admit I’ve taken a bit of ribbing from my friends. They’re just not going for my “Well, that’s what I do for fun. What do you do for excitement?” argument.

That’s why, when I heard Harley Harlson was planning to sail around the world, non-stop, aboard the eight-footer he built in his back yard, I thought, “now THERE’S a man who understands adventure.”

So I gave him a phone call.

It turns out Harley’s about as level headed as they come. Harley, of Lynnwood, WA, is 53, has been married 19 years and has sailed since he was a kid. I was going to ask him things about his eight-foot vessel like “How much food do you plan to carry on your non-stop trip around the world?”. Or “What are you going to do to keep from getting run down by large ships?”

A few minutes into my phone call with Harley, I heard shuffling noises coming through the ear-piece, like someone was moving things. “Oh, I’m working on Sea Biscuit right now,” Harley said. His voice was re-assured, almost professor-like, as though he’d thought this whole thing through and was just wrapping up the minor details… like sailing alone around the world – non-stop – in an eight-foot boat he’d built in his backyard!

So, instead of asking Harley how much water he needed to survive for 12 months alone in his tiny craft, I asked him for an autographed photo of him and Sea Biscuit.

Because when I’m rolling through South Dakota explaining to people that I’m looking for the Lost Sea, folks are going to say “Man, that’s far out.” And I want to open my wagon, point to that autographed photo of Harley and Sea Biscuit and say “Nope. THAT’S far out!”

Harley graciously agreed to send me a signed snapshot of him and his vessel. In exchange, I’m going to send him a copy of my “65 Days Alone at Sea” DVD.

Harley plans to put to sea this summer. From the West Coast,he plans to sail south to the Southern Ocean, turn East, sail around Antartica via Cape Horn and Cape of Good Hope and return to the West Coast.

Once Harley begins his voyage aboard Sea Biscuit, he plans to keep RiverEarth.com posted of his position via satelite.

Thanks for bringing us along on your journey, Harley. Good luck!

Is there a precedent for what Harley’s doing? Meet Evgeniy, a Russian sailor I met who was sailing his twelve-footer around the world….
For an excellent, in-depth article on Harley’s preparations, visit Duckworks Magazine.