I was enjoying that last cup of coffee with my hosts Carl and Erma Sensenig of Belltower Community, MT, when I cast a glance out the window. “Time to harness Polly.” I wanted to say but it came out, “Guys! I don’t see my mule!”

Polly, who’d been turned in Carl and Emma’s pasture overnight, had escaped. Damn! This was way big land and if she got a head start there’s no telling how far she could get before she hit a fence – or a rattlesnake.

In a flash the RiverEarth Mule Recovery Team was mobilized. Carl’s son Zack and his friend Jordan piled into their Dodge Durango and the hunt was on. 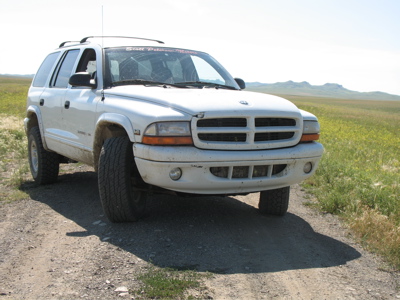 Now understand, this is wide open country. Country so wide, flat and mule-colored (the seed heads are just turning Polly-colored) that it would be easy to overlook a 800-pound animal. 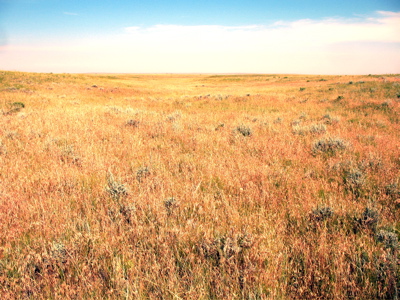 We roared up the Sensenig driveway, rattled across the cattle guard and rolled to a stop. Zack pulled a .243 rifle from the Dodge, threw it to his shoulder and aimed the barrel across the prairie. 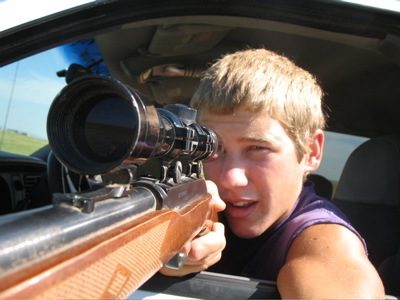 “Sure hope he doesn’t shoot her,” I thought then saw his finger wasn’t on the trigger. He said he was just using the scope as a sort of high-powered monocular – “scoping” is what he called it.

That’s how big this land is. When your mule runs off, the land runs so far to the horizon you need more than just plain eyesight to catch a glimpse. So the rifle wasn’t just a macho symbol you carried around in your pickup, barrel pointed at the transmission. In these parts, it doubled as a useful spotting device.

Zack handed me a rifle. I scoped. 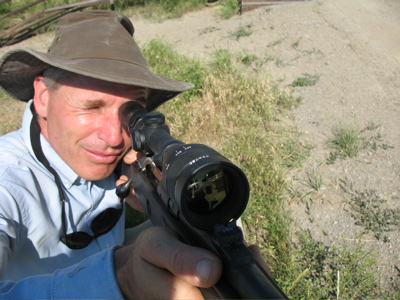 He didn’t need to hand Jordan a rifle. Jordan was already scoping for mule. 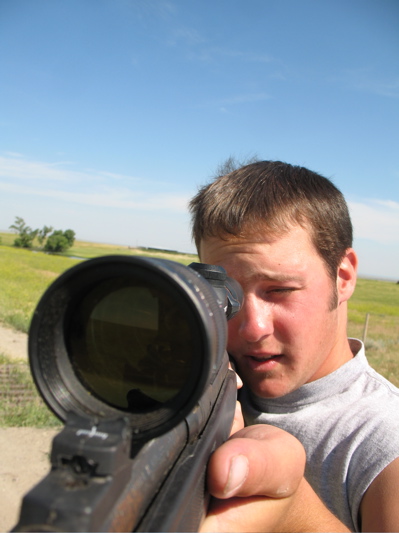 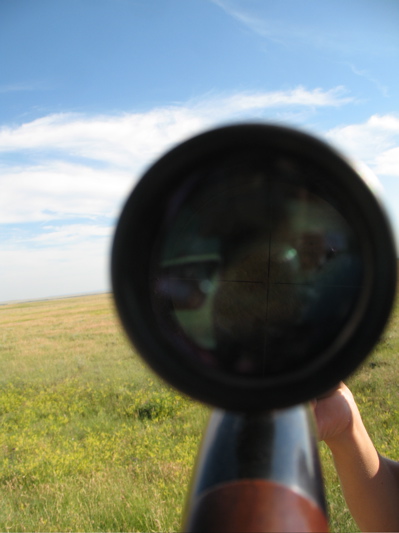 This used to happen out here. Before the days of barbed wire and Dodges, if a pioneer traversing the sea of grass lost his mount, it could be a long search. That mount could run all the way back to St. Louis. Or elude capture altogether. They called the later mustangs.

It also drove home the “Range Stock at Large” signs. These large yellow sign dotted the highway to remind drivers that they were rolling through range-land, open prairie that was home to thousands of free-roaming cattle. And now, one mule…

From experience, I’d learned mules run away in certain patterns. Polly runs in the direction I came from. Evenings, when I turn Polly loose for the night, the first thing she does is head north. It didn’t look good. North ran from here to Canada, three hundred miles up the road.

The three high-powered scopes piercing the prairie yielded nothing. Faced with thousands of empty acres of rolling grasslands, where a dip in the terrain can swallow herds of sheep, cattle and deer from sight, it became clear our morning would be spent searching for Ms. Longears.

We drove a few hundred yards east, stopped, pulled out our rifles and searched. All we saw was prickly pear and sage brush. We drove north a few miles, stopped, scoped. Now it was foxtail grass and gumbo dirt. Finally we widened the search and tackled yesterday’s route.

I’d promised folks I’d mail them a copy of the “Woody and Maggie” book – straight off the mule wagon. Now I wondered what excuse I’d come up to explain that, well, no, I wasn’t able to take their books to the post office in Alzada because I’d lost my mule….

Then, at a cattle guard, a brown, fly-swatting, four legged shape. Driving closer, we made out the foot-long ears. That’s right, it was Polly, resting in the shade of a “Range Stock at Large” sign. 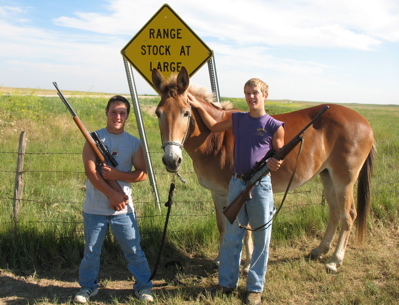 Polly, it seems, had just gotten lonely. Zack and Jordan just walked up to her, guns and all. Then she followed them back to the Dodge and insisted on riding home with them. 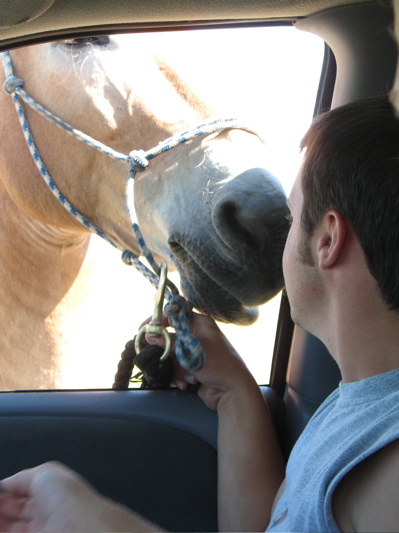 can i catch a ride with you guys…?

The cheek – first to run off, now to want a ride home. I explained to Polly that, no, since she’d run off and enjoyed the outward bound section prairie alone, she’d enjoy it with human company on the way back. 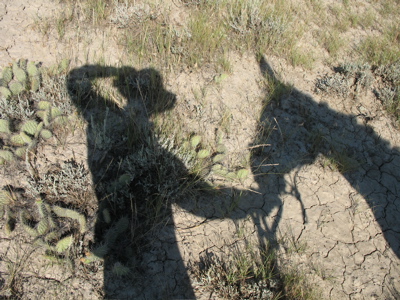 It took us the rest of the morning to get back to the Lost Sea Wagon. By the time I got back to the wagon and fixed the fence (Polly had stepped over a downed section of wire), the day was half gone so I figured I might as well take the other half off. That’s why it’ll take us five days to travel the seventy-two miles from Ekalaka to Alzada, MT – provided I don’t loose Polly again. 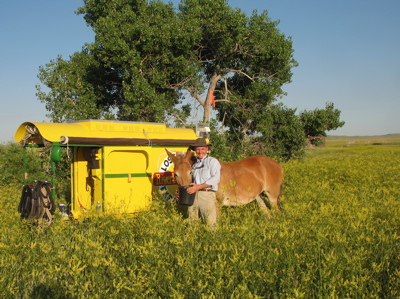 In the morning we set off anew for the Alzada post office.

So that’s what’s up on the Lost Sea.

Sure hope the week’s going well for you. Remember to keep your reins tight, your wagon wheels greased – and your mule picketed tight…

One Response to Grab Your Scope and Rifle. Mule Polly's Escaped!