The potato truck roared toward us and left Maggie with one decision, leap into the irrigation canal or plunge down the road bank.

Maggie chose dust over drowning, took her buggy airborne and belly skidded to halt in the date palm grove.

The truck billowed by a flattened Maggie and Woody just stared. She lay there in the dirt and palm fronds, wrapped in tugs and breaching like a poorly tied hay bale. Then out shot her front legs and up rose her tail and she was standing again.

But the buggy ignored her lead. It just lay there on its axles, the port-side wheel busted to the heaven-side of repair. 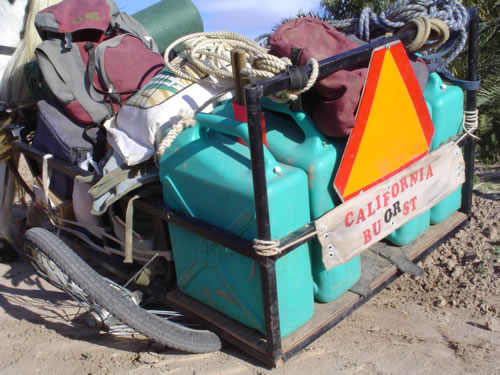 We must be in California now…

Oh and now the cursing really started. It made the sailor in me feel better but had no effect on the wreckage before me. Eighteen of the wheel’s thirty-six spokes had been wrenched loose from the rim. I cursed and fumed and then counted again. Not a single lousy spoke had jumped back into its ragged hole.

It was over. Maggie’s faithful buggy, the one she’d sledded through the Rocky Mountain snow, bounced over the Butterfield Stage route and drug to the Center of the World, was ruined.

The sailor in me decided this called for immediate salvage before the tide rose. This, after all, was an irrigated Medjoohl date palm grove. At any moment, some one could cut a floodgate open and the canal across the street would start flooding the date grove. If I abandoned my ship in its current state, I risked loosing everything from photos to journals to food.

When ships run aground, one school of thought says drag them higher up the reef so their contents will stay dry. So I dragged the buggy to the nearest regal palm and began the ship-stripping business.

The plan? Ditch the buggy, pack what I needed onto Maggie’s saddlebags and complete the trip as I’d started, by hoof.

I fed off the fresh produce I’d been saving for the Anza Borrego desert ahead. Woody and Maggie wolfed down oranges and bananas and grapefruit with the glee of Customs inspectors eating contraband fruit for lunch. Maggie suggested they move on to oatmeal but that’s where I drew the line.

Then I set about salvaging my gear.

What did I really need?

I stuffed a few things into Maggie’s saddlebag; the camera, my photos, my notebook, a clean shirt, a bit of rice and olive oil. Not much more.

The stuff that mattered in this journey had been reduced to under twenty pounds.

I tied the tipi and sleeping bag behind Woody’s saddle along with some rope. Then I lashed a tarp over the wreckage and set off toward the Laguna Mountains. 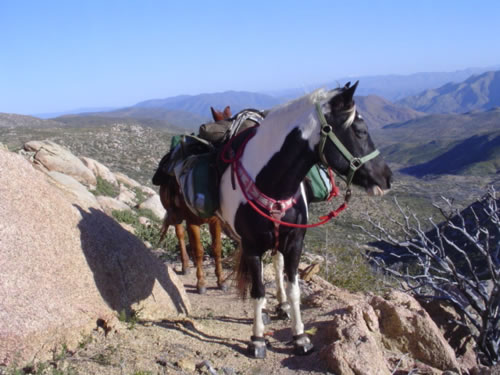 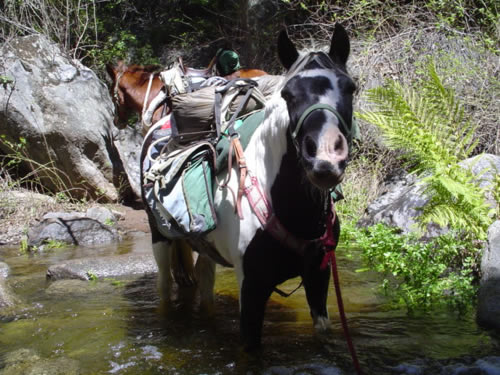 One last creek to ford