It cheers me that I can do today what once took an act of Congress. It’s just too bad they never heard the saguaro.

In 1857, Congress voted funding for an overland mail route “from such point of the Mississippi River as the contractors may select, to San Francisco”. The contractors chose St. Louis. Congress chose San Francisco. Ok, so I chose Oriental, NC to San Diego. Still, our routes often overlapped.

As I make my way across Arizona, I weave my way back and forth across the route that John Butterfield eventually chose to fulfill Congress’s mandate.

John Butterfield had been a stage coach driver for lines back East. The route he chose ran from St. Louis to Fort Smith, Arkansas and then south-west under the Rocky Mountains through El Paso and then across Southern Arizona.

I chose a similar route for many of the reasons John did. It was flatter than the northern route. And it was snow-free year round.

In Mobile, Arizona I followed the old Butterfield Route through the desert for four days. 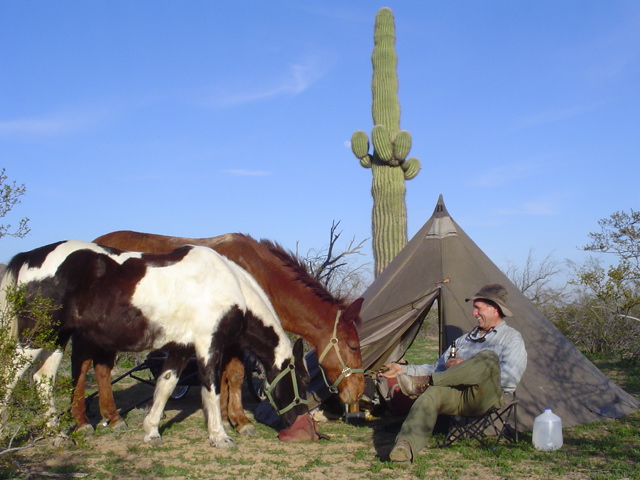 Pitched among the silent giants

Until now, I’d never had the occasion to camp under a giant saguaro cactus. Now they were everywhere.

The second night out, I pitched my tipi among one of these silent giants.

Or was it so silent?

After the sun went to ground, after the rosy glow faded, a breeze slid from the hills and blew life into the cactus grove.

That’s when I heard the sound. That’s how I heard my first saguaro concert.

The saguaro behind my tipi had three distinct sounds.

Down low, where there are no spines, the saguaro resembles an ancient Long-leaf pine trunk. Tiny grains of sand make brushing sounds on the loose bark. Then higher up, where the inch and a half long thorns run to the sky in bristling vertical rows, it sounds fuzzy; a hair brush held out in a gale.

Higher up yet, where the arms sprout and curve to the sky, the saguaro is the loudest. It’s a round sound that wraps itself around each limb like an acoustic hand.

When you close your eyes, the whole cactus speaks from trunk to tip in these three voices. 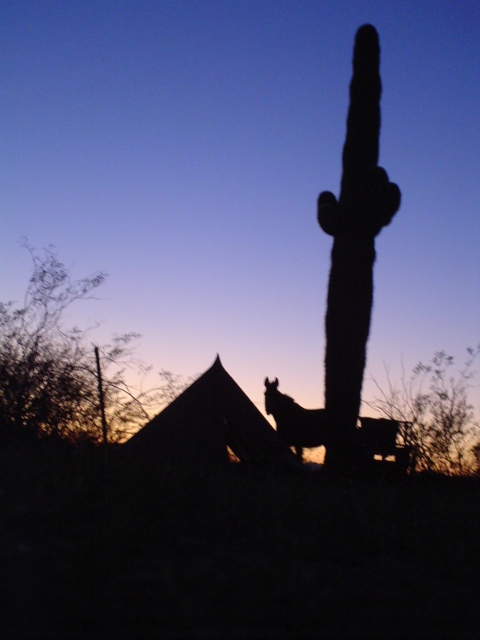 Mule Woody engaged in a bit of cactus listening

In 1860, the Pony Express began mail delivery from St. Louis to Sacramento. In 1861 the transcontinental telegraph was completed. In the span of a few years messages went from bumping across the nation in wagons to zinging across through slim wires.

Then a few years later Congress’ next overland dream was realized. It was called the train.

The improvements in communication shifted business away from John Butterfield’s overland route. For a few years, the route was still used in regional legs. Then finally it disappeared all together.

Now the desert’s gone back to quiet.