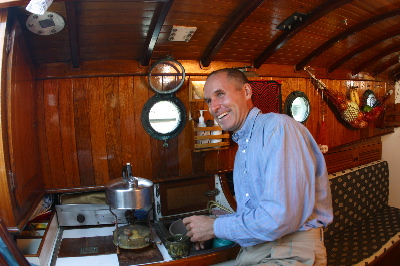 Traveling the Texas High Plains by wagon this holiday season, I think back to Christmas on the high seas. Click here for the nautical nativity scene….

Come late December, the Caribbean’s tropical version of Christmas hits fever pitch. Reggae groups sing of snow and sleds and roasting chestnuts on open fires. Steel pan bands hammer out renditions of “White Christmas” and “Jingle Bells” while taxi drivers in tropical prints argue the turkey versus ham debate. Between the heat, the steel pans and the arguing cabbies, I find it hard to cultivate that cozy Christmas feeling.

To jump start my Christmas spirit aboard my steel cutter “Sea “Bird”, I water my basil plant, the one that survived on the circular pool of light that shone through the nav station porthole. The salt air was so harsh it had to live inside. This year, it would serve as my Christmas tree. 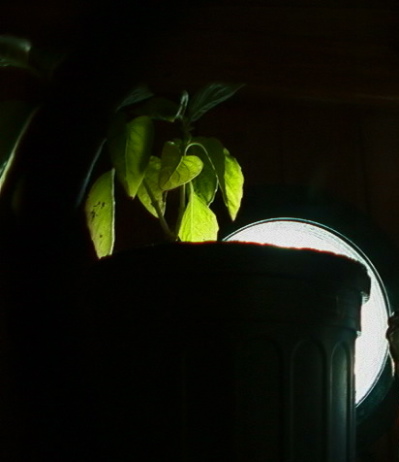 Then I set up my nativity scene. It had been a going-away present from my aunt. My worn but cherished menagerie includes three tiny but wise wooden men, a tin foil Star of Bethlehem, two miniature candles, three origami stars and a heavenly host of trumpeting angels. Mary, Joseph, and the baby Jesus live in a two-inch tall pole barn. The whole collection fits into a battered four by six-inch box.

As I unpack the box I notice that a year’s worth of hard sailing has changed the look of Christmas. A few of the angels have lost their wings. Rummaging around the box I’m rewarded with one mismatched pair. I manage to patch up the white angel. The other two wingless ones will have to keep the wise men company on the ground.

Casualty number two is the blue wise man who’s chipped his golden crown. Because I don’t have any gold paint I retouch his dented crown with a red pen. I’ll just have to imagine his crown is studded with rubies.

I set up the creche on “Sea Bird“’s bulkhead cabin heater. This makes a fine platform for the nativity scene because it reminds me of cooler Christmas weather back home. I tape the tin foil Star of Bethlehem to the stovepipe. The angels and lesser stars I suspend from lengths of light fishing line. To keep the wise men, the manger and the fallen angels in place while I sail, I secure them to the stovetop with pieces of white Velcro. Because I cut the Velcro too large, it looks like each figure is standing on a tiny drift of snow. This oversight only adds perceived Christmas chill to the tropical air. It’s nothing a cup of hot tea can’t cure.

As “Sea Bird” travels between islands, my nautical creche takes on a life of its own. One day an unusually lumpy wave tips over the red wise man, cleanly knocking off his wooden head. Feeling guilty I grub out the instant epoxy and glue the head back on my decapitated friend. Of course the angels are shedding their cardboard wings like day old flying ants. I try to fix them as quickly as I can because they are too eerie swinging around without wings. In their graceless state, they look like they’re being hanged for bad behavior.

As if wings weren’t enough, the cherubs also start dropping their instruments. First the little drummer angel drops his miniscule drum. I can’t find it on the cabin sole so now he swings over the wise men wielding what appear to be two tiny chopsticks. As if in cohorts, the blue trumpet angel loses his instrument (which suspiciously resembles a golf tee) and is resigned to spending the rest of the Yule season empty-handed. Yesterday the white angel redeemed the others by catching the Star of Bethlehem after it came untaped from the stovepipe. Mary, Joseph and the baby Jesus weather it beautifully in their pole barn stable. 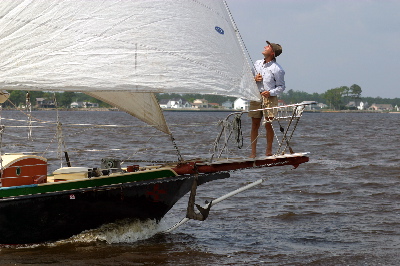 “Sea Bird” under sail (Will and Deni McIntrye photo)

Despite the humor of my rapidly disintegrating nativity scene, it gets me in the Christmas spirit. By now, the creche has become a living village. I have become its self appointed caretaker charged with keeping order and nurturing the occasional minor injury. Days, the angels and stars spin lazily to the motion of the “Sea Bird”. Nights they circle by candle light over the sleeping baby Jesus, casting elegant shadows on the mahogany coachroof. Their presence and antics cheer me immensely.

“Sea Bird“’s scaled back decorations bring me back to simpler Christmas times. On top of the ship’s stove, I rediscover the simple thrill of Yule time uncluttered by guilt-driven gift giving and high pressure Christmas shopping. I catch myself staring peacefully at the nativity scene to see who could use a helping hand. Every time I discover something new.

From aboard the “Sea Bird”, I wish you all a simple and peaceful Christmas. I hope you all discover your own quiet places to ponder the mysteries of the season. I wish I could show you mine. Only I must go now.

Oh, and for those of you who’d like to take a quick sail aboard “Sea Bird” just click on the following link to preview the “65 Days at Sea” DVD.

One Response to Christmas Carribean