Do you Call it Shark Tooth, Buffalo Horn or Devils Tower?

Traveling thoroughly as I do with a mule (it’s “thorough” as opposed to “slow”) I have the luxury of watching the landscape change as I roll across the Lost Sea seabed. Last week, when I saw Devils Tower rise between Polly’s ears, it looked like a shark fin cruising the Lost Sea off to the west. 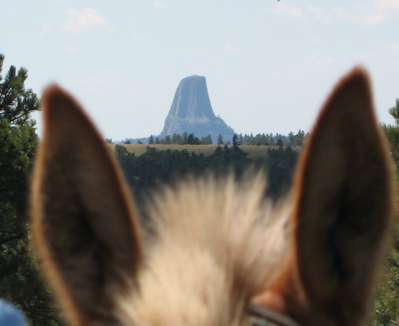 Devils Tower from 11 miles away

As I got closer, my route drifted south. It looked more stump-like. 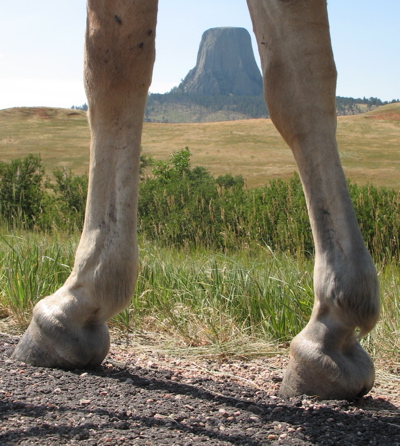 Devils Tower from 4 miles away

Finally, twelve days after I fist spotted it, I arrived at its base and it looked like the Devils Tower of “Close Encounters” fame. 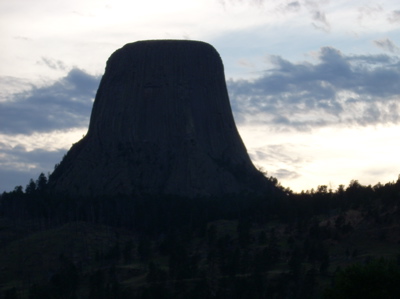 Devils Tower from 2 miles away

This matter of approach and perspective wasn’t lost on the Native Americans that lived in the area long before the white man called the tower among their midst Devils Tower. (That’s right. Our first National Monument is spelled without an apostrophe – whether it’s due to clerical error or multliple imps of Satan remains unclear .) This week, Milo Yellow Hair explained how the Native Americans named the mountain – solely on from what direction it was viewed. 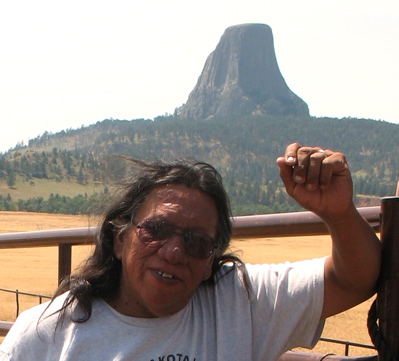 I met Milo at the Tower’s base as he was showing guests the area. According to Milo, an Ogallala Lakota from Pine Ridge, South Dakota, the native tribes gave the tower a different name depending on the direction from which they viewed it. Looking from the east, where I saw a shark fin, the Lakota saw “Grey Buffalo Horn”. From the south, the Arapahoe, instead of a stump, saw “Broken Buffalo Horn”.

Other native American folklore holds that the mountain rose up to save six Sioux maidens from a giant bear. The bear, clawing the mountains sides to reach the girls perched on top, left the distinct grooves in the structure’s sides.

Still, I like the visual approach best, the one that changes with perspective. It’s in keeping with the way I wander the land. Last night it rained and ever the sailor, I snapped the tower’s reflection in a puddle. I’ll name it come nightfall. 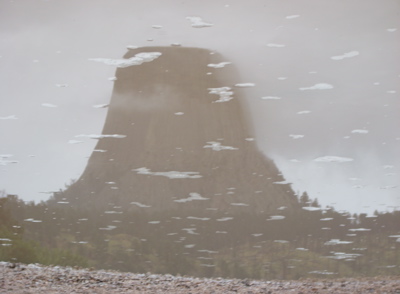 (Thanks Matt and Kathi of the KOA Campground in Devils Tower, WY. Polly’s sure enjoying her corral and I got a kick out of watching “Close Encounters” last night at the foot of the fabled tower.)