I know. I told you I was sailing a wooden sailboat from the Falkland Islands to South Georgia. Somewhere along the way, I ended up going from my sea berth to chasing sheep.

I’m new to this sheep thing. Here are some photos. Hope this makes you appreciate that wool sweater you’re wearing!

Yes, I still plan to sail to South Georgia in early January. 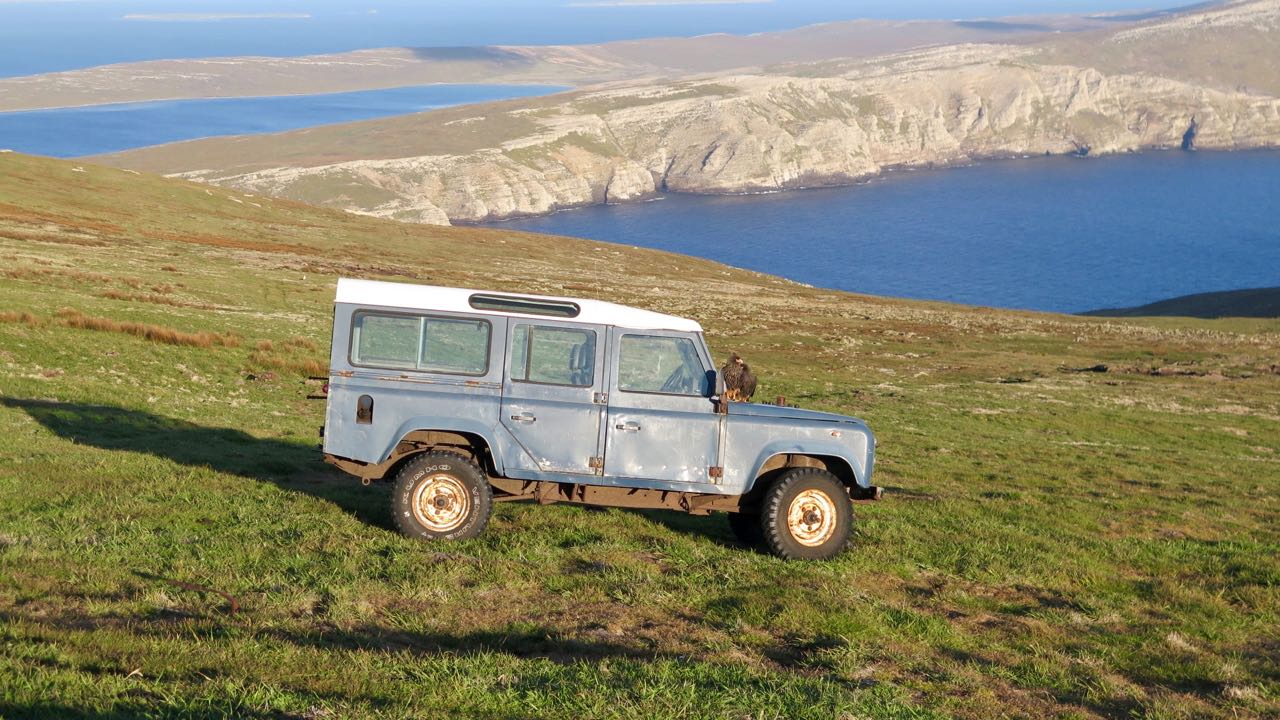 Before you can shear sheep, you have to catch them. In the Falklands, it’s called “gathering”. In days past, it was done with horses and dogs. Today, it’s done with Land Rovers and motorbikes. Look at that photo. You’ll see a lot of land and very few sheep. The island we’re gathering on has 750 sheep on 3,000 acres. If you look closely at the hood of the Land Rover,you’ll see…. 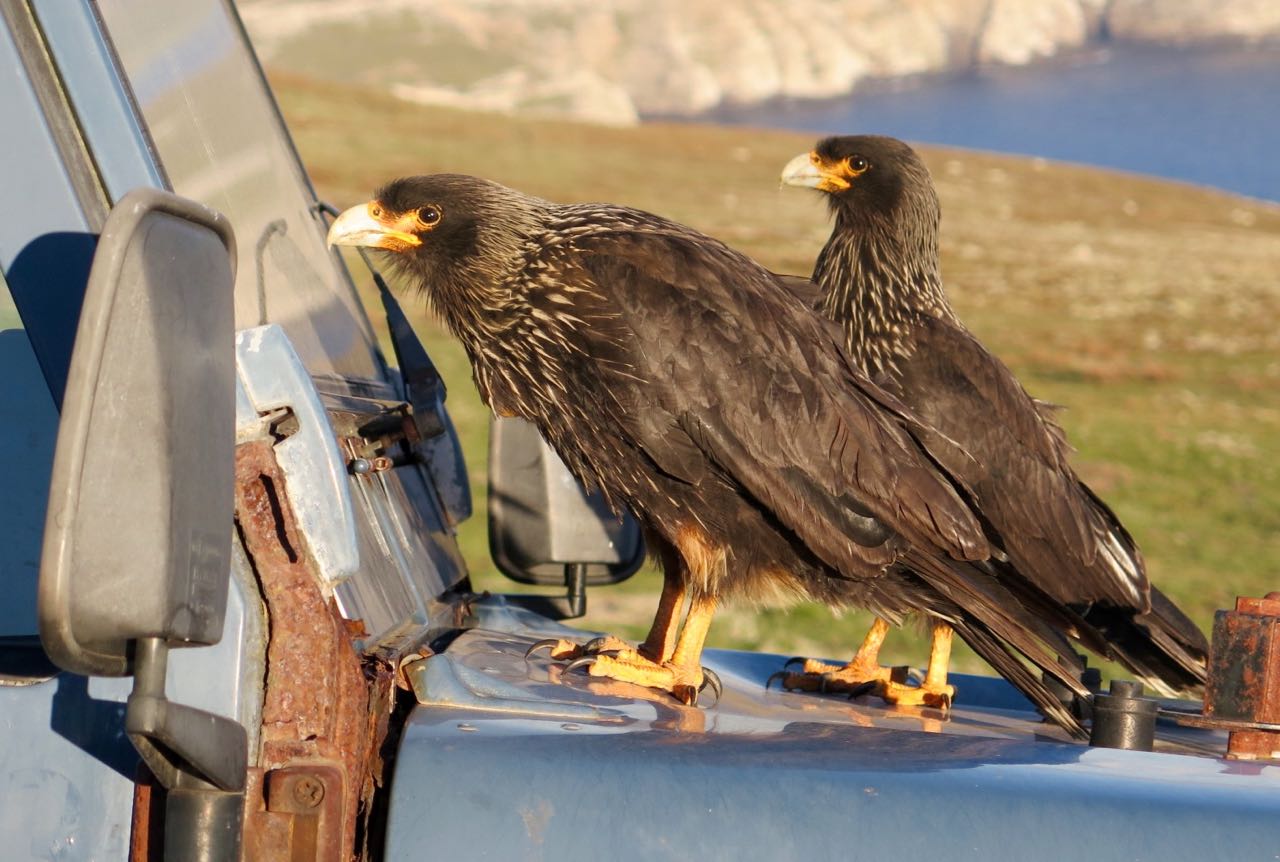 ….caracaras. Known locally as Johnny Rooks, these birds of prey will pinch your hat as quickly as they’ll nab an injured penguin chick, a camera, clothes off the line, or, if you’re digging potatoes, spuds. Curious by nature, these two had an affinity for Land Rover windshield gaskets. It doesn’t take long to figure out why the island’s Land Rovers are missing their wiper blades. 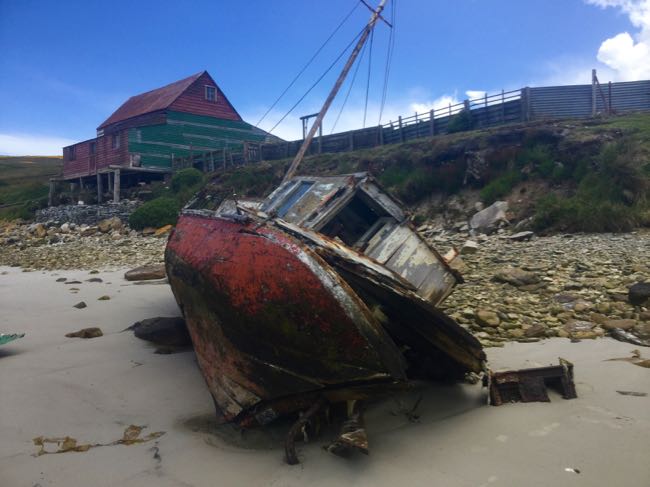 The sheep are driven from the island paddocks down to the shearing shed. The shed sits just on the water, a few feet from this shipwreck. It is said to the second oldest shearing shed in the Falkland Islands. 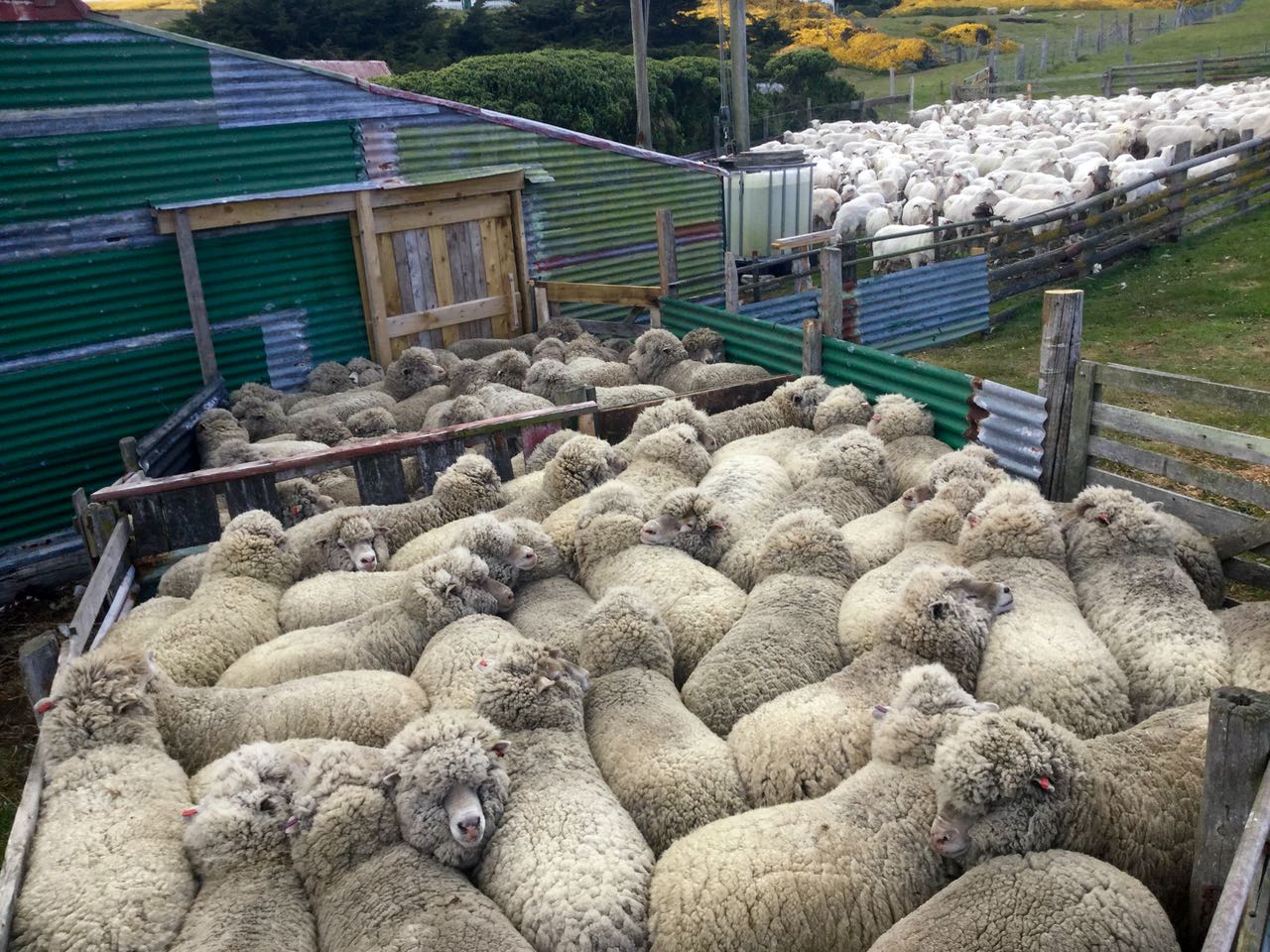 The big wait: sheep are either terrified or waiting. Here, they’ve been put in pens to await their annual hair cut. The sheep in the far paddock are lighter colored because they’ve been shorn (or “shored” as some islanders say). 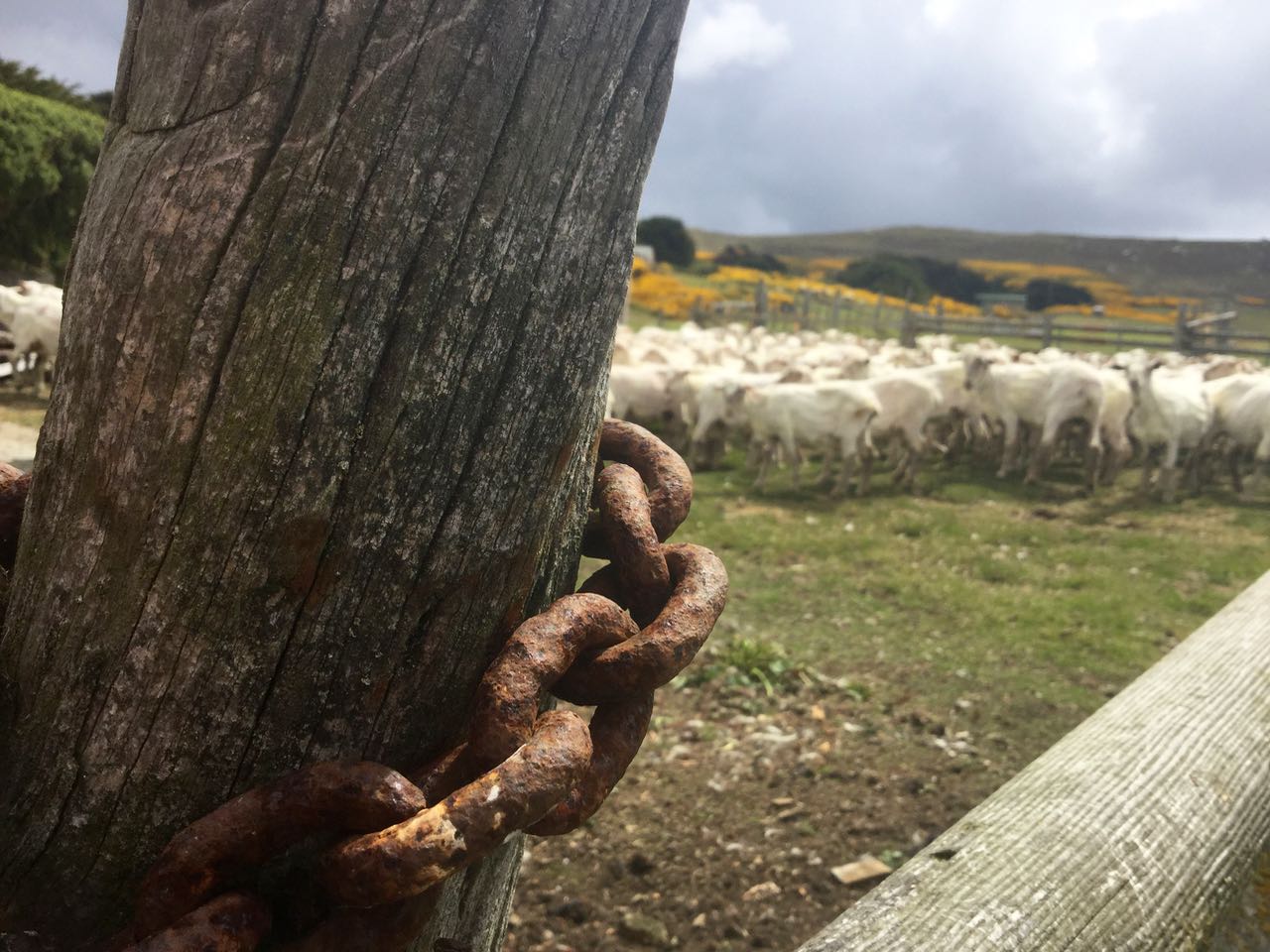 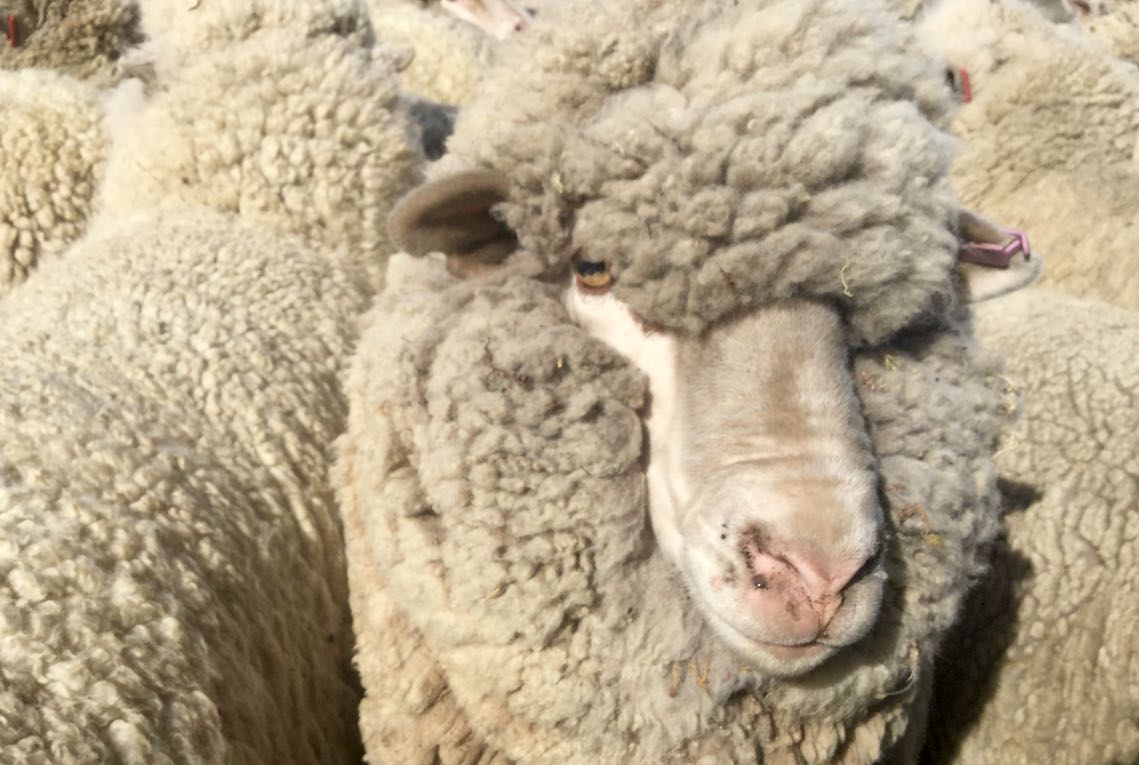 The sheep are Pollworth crosses. I don’t know what a Pollworth is, but even with my beard starting to grow in…. 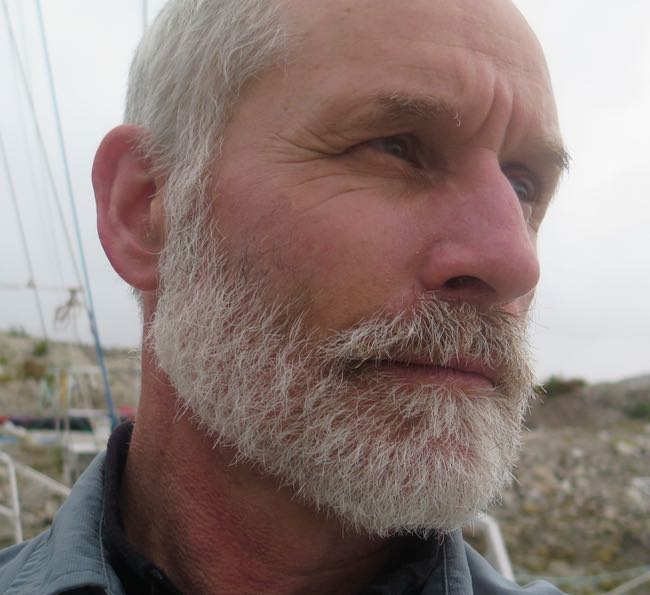 ….I still have a long way to go. I don’t think my wool will bring much.

Coming next, what goes on inside the shearing shed. 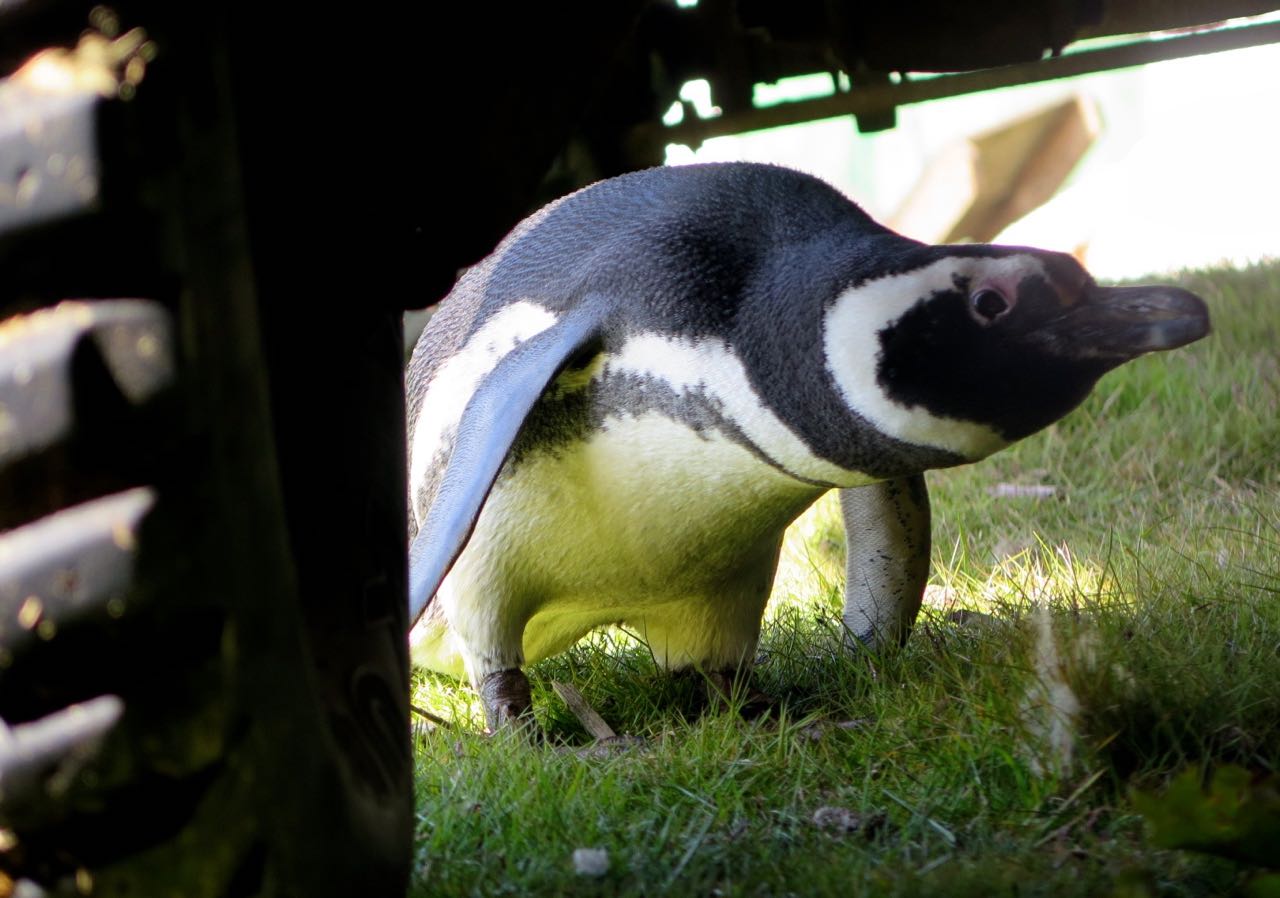 It’s not all about sheep. Here, a Magellanic penguin, also known as a jack ass for its braying call, takes shelter under a Land Rover. 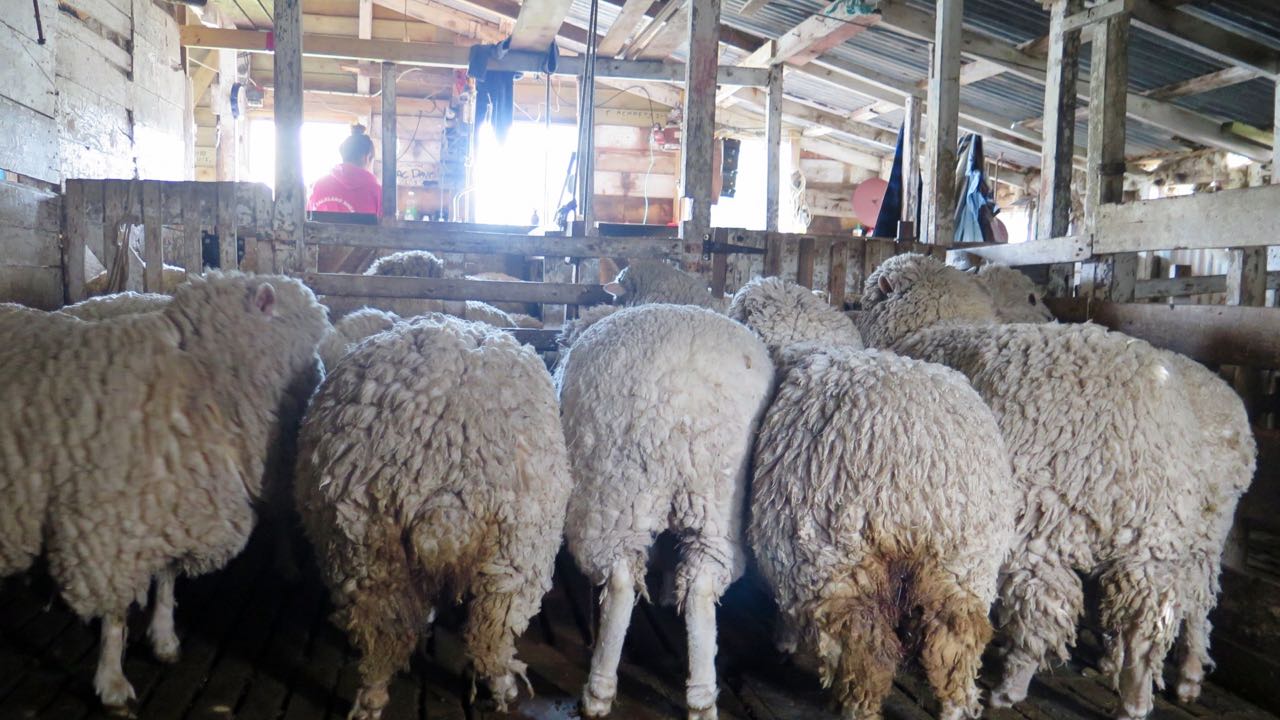 In to the shed they go. The shed holds about 70 sheep. The sheep go in one end. At the other…. 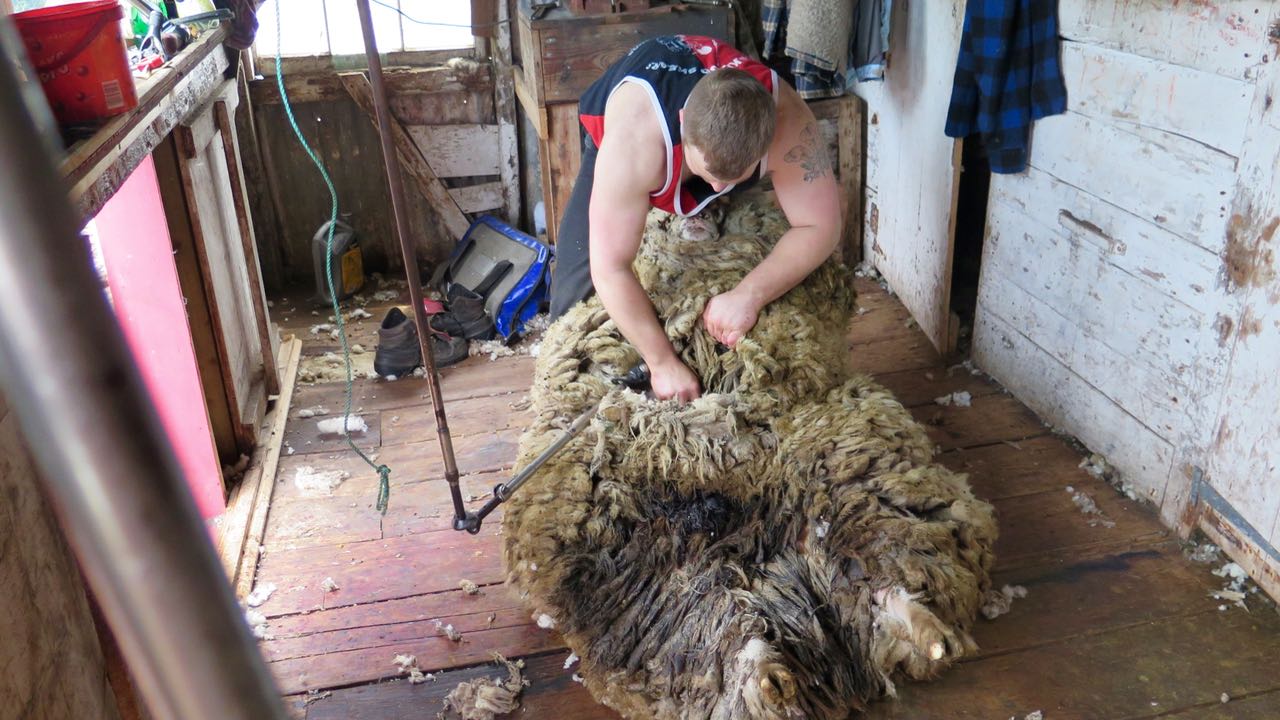 …shearers tip them on their backs and get busy. The sheep being shorn here is called a double fleece. That sounds like a good thing. Twice as much wool, right? Actually, the wool is very coarse and not worth much. It was thought this sheep escaped shearing last season because she took to the island cliffs during shearing. Trouble is, a sheep like this can lure others away from the herd come shearing season. The island has to get its mutton somewhere…. 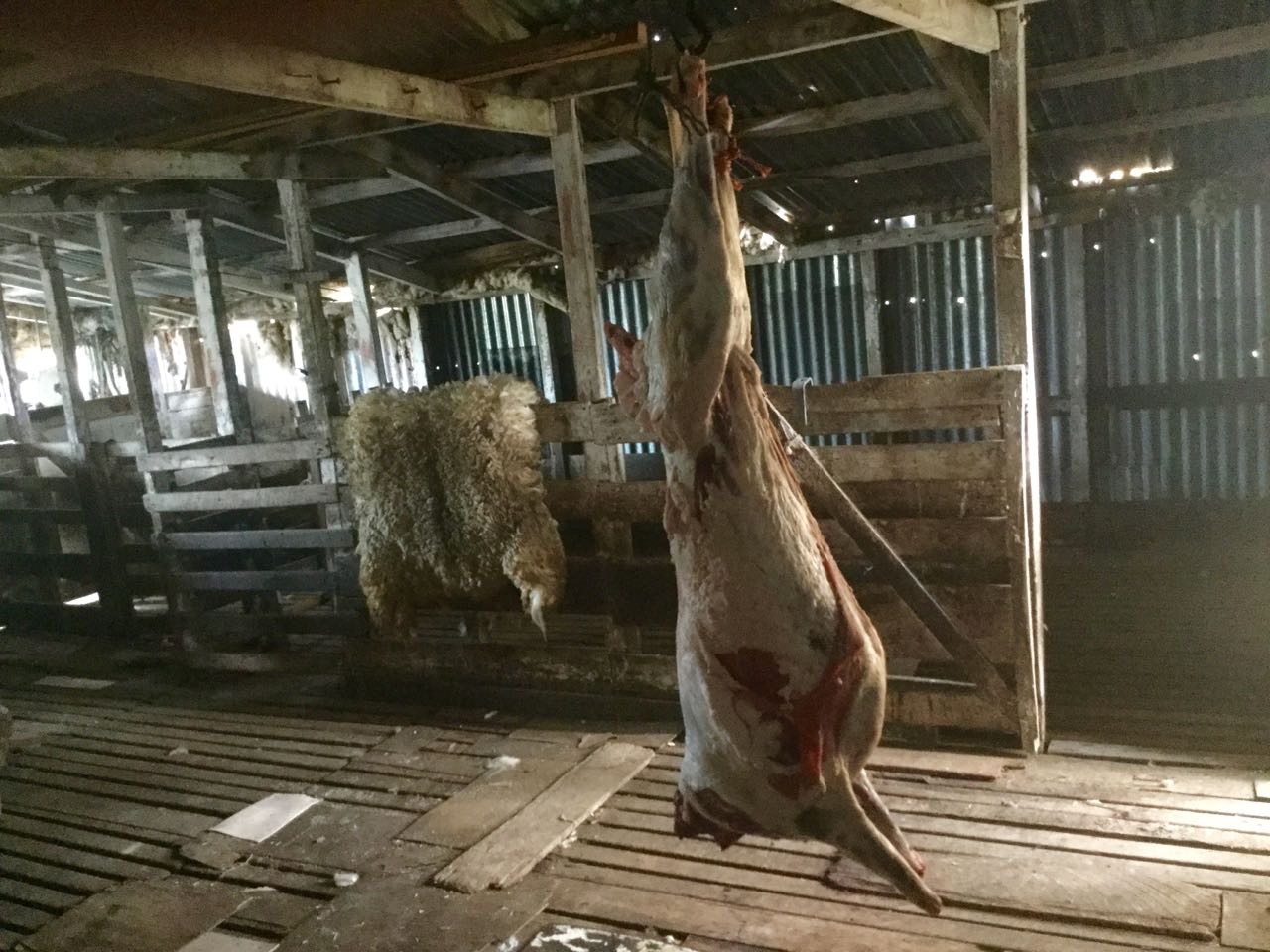 Yes, sheep shearers eat mutton. This ewe was butchered, hung and taken to the house where… 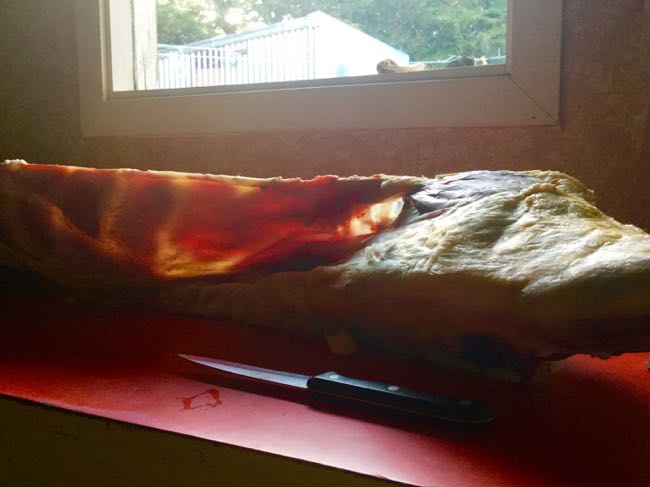 …she was reduced to ribs, roasts and shanks. That night, we had the thickest lamb chops I’ve ever eaten. I spent an enjoyable hour after that meal sucking the mutton grease out of my mustache. 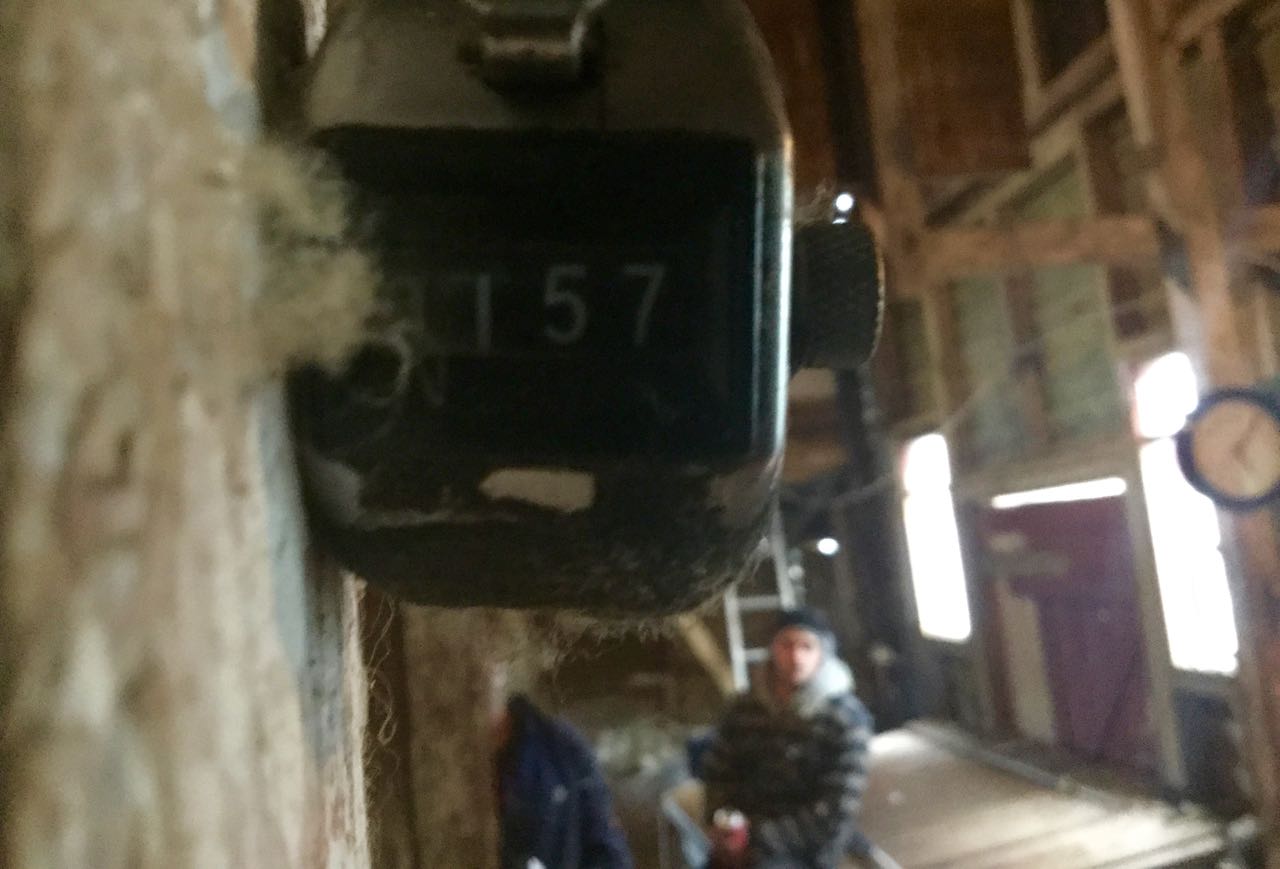 Shearers are paid on a per sheep basis. Every time a shearer goes for a fresh sheep, he clicks this clicker. A good shearer should be able to clip over 150 sheep per day. I’m not a good shearer. In fact, I’ve never sheared a sheep before in my life. That didn’t stop me from buzzing 6 inches of wool off a big ewe whereupon the hand piece was returned to the pros and they got on with the job.

And the cycle is complete. This is the view from the shearing shed roof. The sheep in the middle pen have been shorn. Soon they will be turned out and they’ll scatter across the island. 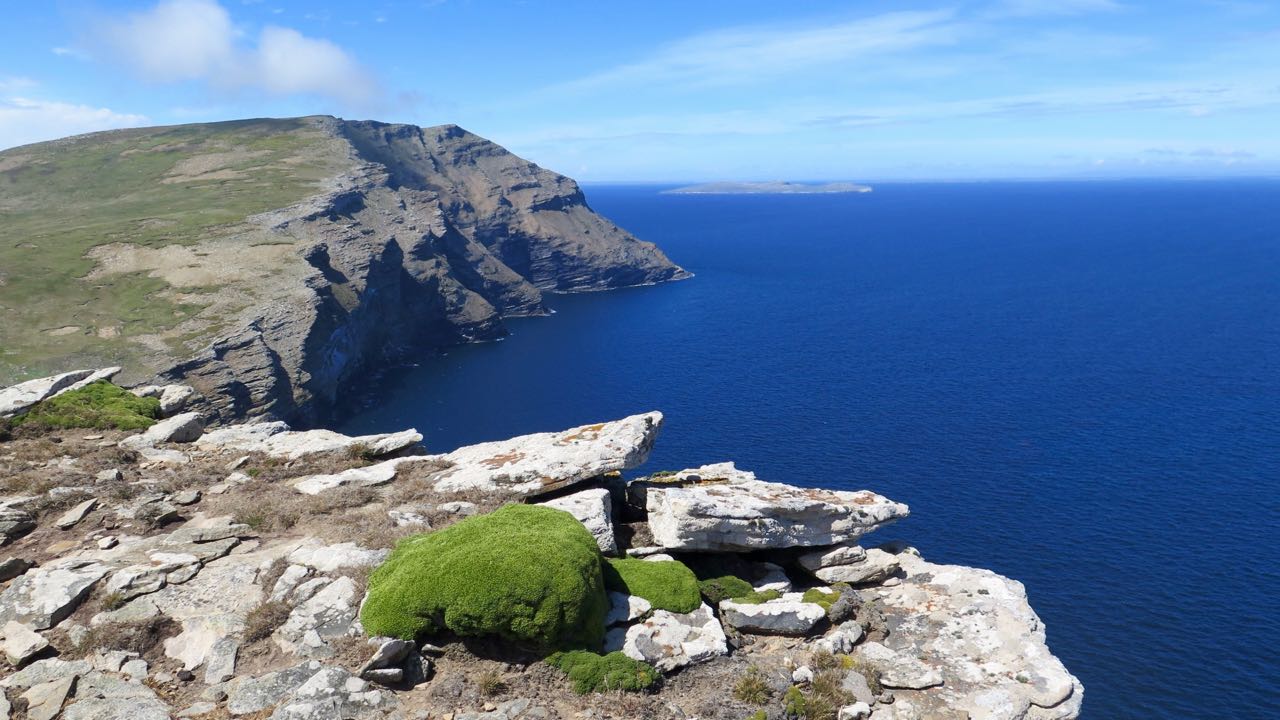 After three days of shearing, we take to the hills. After a shower, nothing removes the smell of sheep like 30 knot winds atop a cliff like this.
Posted in Off Antarctica - South Georgia, Travel by Boat