Growing up, one of my favorite pictures in my parent’s house was a photo of a man cultivating tobacco behind his mule. 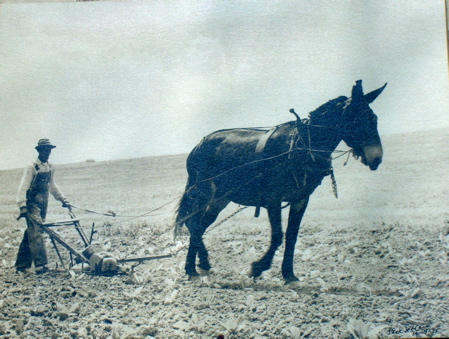 That old man was slim as a tobacco stake and the great old mule he walked behind had a notch missing from his ear. The man’s cultivator was one of those old wooden ones that relied on river rocks to help it get a better bite. I imagined the photo was taken in Oklahoma. From then on, I had the dream of running away to that land of black and white men and ponderous mules.

Why am I mentioning this?

Well, because I ended up with the same sort of tobacco working mule. Two of them actually. Now I have something to pull my wagon (when it’s finished) with. 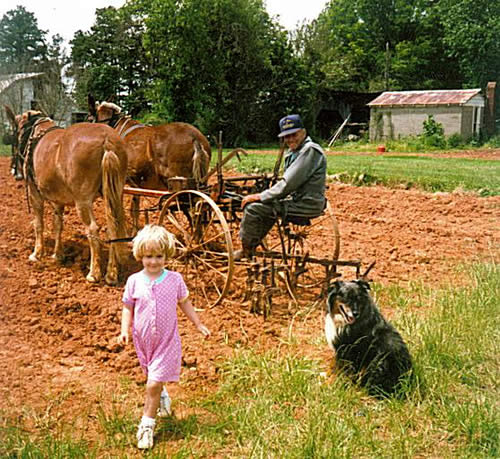 Jack and Bill belonged to a fellow named Frank Hennings who lived outside East Bend, NC. According to Ted Nance, who found the mules for me, “Frank was the area’s best country vet before they got modern medicine like they do now. He castrated more horses than anyone I know. Did hundreds of them and charged ten bucks.”

“Oh, Frank used to plow all sort of things with them. After the tobacco was picked, he’d plow the stalks back under with them.” 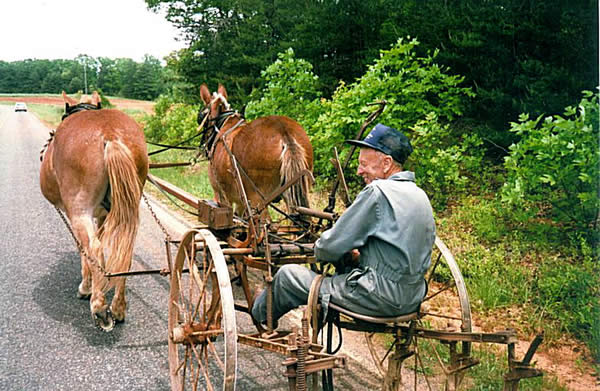 Then a few years ago, Frank died.

His beloved mules were turned out. Occasionally they were harnessed when a hay wagon needed pulling or a parade needed attending.

Then I stumbled into their retirement. Now it looks like they’re ready to get back into the harness again. 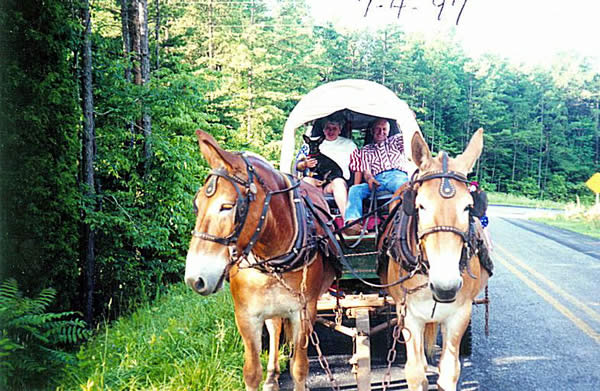 (Thanks Ted Nance and Bud Patterson for helping me find my buck-a-pound engines.

Also, thanks to Jack Jeffers (jeffersfineart.com) who sent me the story behind the mule I adored as a kid. The following is a reprint of the story of what I thought was the Okie mule.

This is one of those rare circumstances when a concept can suddenly appear out of nowhere.

I was returning from an art show in Nashville, Tennessee when I decided to take a back road from Knoxville to Kingsport. It was old US Rt 11W. It sort of reminds you of Historic Rt 66 out west with all the old and dilapidated motels and filling stations that dot the landscape. Relics of the past I call them. Most of my finest images have been discovered along these old trails.

I had just passed through the town of Surgoinsville in my 72-cargo van when I happened to glance over my left shoulder and spotted an old fellow and a mule going through a fresh field of tobacco. He was using an old wooden harrow weighted down with several good size river jacks to make the blade penetrate the soil. This was a sight to behold, as one large mule appeared to be dragging both man and machine through the clod-filled field.

I was caught totally by surprise, but I had my camera pack in the back of the truck and decided to take a chance and capture this image before it passed into oblivion.

I pulled off the road, donned my forty-pound camera pack and quickly climbed over the remains of a fence as the farmer and mule disappeared over the distant crest of the hill. I figured that when he made the next pass, I would be set up and ready to capture this image for posterity. It happened just as I had planned, and I made a couple of precisely timed exposures before the operation came to a halt. Now, I would have to explain to this man why I was standing in the middle of his field with a heavy tripod and camera aimed in his direction.

I did not have my dog Rufus with me on this trip, but I quickly introduced myself and told him exactly what I was doing. Simon Ward was his name, and he just shook his head and chuckled over the whole sequence of events. Bottom line, he was flattered that I would want to photograph his mule Kate.

Simon was quite a character. He probably didn’t weigh more than a hundred and twenty pounds with all his clothes on. But he sure could handle that great Tennessee Mule.

We chatted and he told me all about Kate and how he had traded a watch for her some year’s back. She was 22 years old and huge. The interesting thing was that the watch he traded for Kate had been lost for some time before he happened to spot it one day lying out in a field. It still worked, so he traded it for Kate. “Been together ever since” he said.”)