Ground Goobers and the Egg Man

So last week mule Polly and I are traveling across eastern North Carolina in my just-built mule wagon. Getting ready for our Canadian Maritime Adventure. 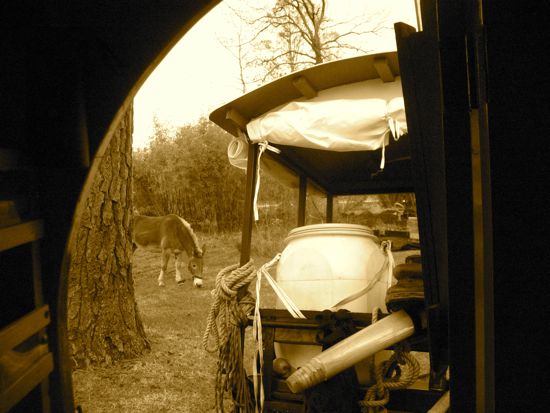 The view from inside the wagon. In the background, mule Polly fills her tank. (Bayboro, NC)

If you recall, the wagon is actually two parts. Part One: the forecart, on which I sit, is a two wheeled cart outfitted with a trailer hitch. Part Two: the wagon, is a two-wheeled trailer that serves as living quarters, cook shack and writer’s haus. Hook both parts together and you have a lightweight, fair dinkum, over the road traveling machine. Mule Polly, at 800 pounds, can drag it around all day and still break into a trot come sun down. 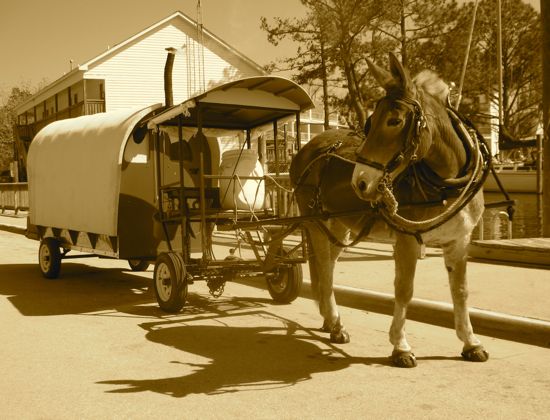 A good view of the forecart and trailer. Dang that Polly throws a distinct shadow.(Oriental, NC)

So anyway, we’re cruising along the mosquito infested drainage ditches of Pamlico County. Something about those canals draining the land years ago so it could be cultivated in unsustainable ways. And all I hear above the latest crop of mosquitoes is this squeak that sounds more metallic than biological.

Sure enough, the trailer hitch on my wagon is graunching against the forecart. Short explanation: the up and down motion of a Polly’s gait was dry-grinding the 2” hitch ball into the trailer hitch. I stopped. I looked at the hitch.

I saw a small pile of steel shavings collected around the hitch ball.

What was needed was some lubrication. Too bad I left my grease gun and anti-seize lubricant (“good to 700 degrees Fahrenheit” the label had read) in Oriental.

Then I remembered Tim.

On the second day of my trip, I’d visited my buddy Tim and his family in nearby Florence. I’d picketed Polly overnight in their backyard. The next morning, I’d bragged Polly up. Suggested to Tim that maybe it would be cool to harness Polly up. Hitch her to the wagon and go visit neighbor Ted for some fresh eggs. Ted. Ted’s the Egg Man. I met him years ago. Bought eggs from him back then and figured it would be cool to do the same in the Circle Will be Unbroken kind of way.

So I harness Polly and tie her to a tree in Tim’s back yard. I run my mouth another 10 minutes to Tim about how great this mule is. And when I turn to put her in the shafts (that’s wagon speak for hook her to the wagon) she’s…. gone.

Damn it! Double damn it! How the hell did that happen? Okay, I know exactly how it happened. After sailing around the world and crisscrossing the USA by mule – endeavors that call for lots of knot tying – I screwed up my bowline knot. Happens when I juggle mule restraint and gamming with friends.

So I trudge up Tim’s driveway to search out the Egg Man.

Experiences shows that Polly generally runs away in the direction she traveled from, often to equine company. And the Egg Man, whose house we drove by the day before, owns a donkey and horses. Where Polly would end up was a foregone conclusion. Funny how, though my mind can process this higher order logic, a mule proof knot escapes me….

Halfway up the driveway, I meet the Egg Man. He’s leading Polly – her harness all twisted to the side like she got it hooked on something and kept on running.

“I figured this was your mule,” he informed me as he handed me my charge. The lines, the braided ropes I use to steer her, were wrapped around her back legs. She high-stepped over them like a first time lady of the night irritated by too-tight garters.

There had been reports of a harnessed mule running by the nearby corner store. Then the Egg Man found one in his back yard. Yep, if there was a fully-rigged mule streaking across Pamlico County chances were good it was mine.

What does any of that have to do with a squeaky ball hitch?

While staying at Tim’s, he gave me a jar of home made peanut butter. Says he bought a bag of peanuts. Roasted them. Ground the suckers up and plopped them into a jar.

It’s into this concoction that I dipped when the mechanical metal squeak droned out the thirsty buzz of skeeter wings. Yep, just ladled a spoon-full of goober goodness onto my forecart’s hitch. It worked. In a flash, the sound of metal on metal was replaced by the hollow clip clop of mule hooves and the buzz of tiny wings. 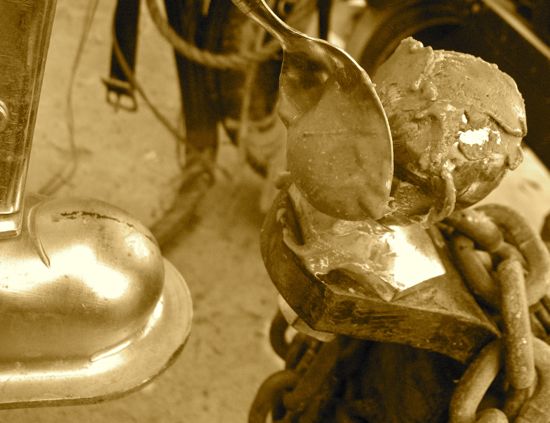 The cure worked until I ran into a yellow dog in Aurora. Named Toscano. Licked that lubrication right off my hitch. I know it was Aurora because that’s where I ran into the story of the man that killed the circus gorilla while pinning it in its cage. But that, amigos, is a story for another day. Here’s one of what happened last time I visited Aurora by mule.

It’s great to see the Biscuit Wagon pictures from your last mule trip to Aurora in 2006. I’m sure your bowline was just fine. The mistake you made was introducing Polly to things – nautical. She can now untie a bowline faster than you can make one – ha ha.

Bob,
Glad you enjoyed those pre-Bob Biscuit Wagon pics. You mentioned the mistake of introducing quick-study Polly to the bowline. The other day she caught a glimpse of my credit card and now boxes and boxes of mail order horse treats are showing up at the stable. Hmm……. Hope your final preps are going well. Looks like we’ll be out the door about the same time. Cheers! Bernie

You guys really crack me up! Great story…

are those hoof boots you put on your mule or me that has never really looked at a mule’s feet? I’ve often wondered if I could get away travelling with my campwagon and Belgians without shoeing them if I made sure to let them build up some callus very gradually. One of my horses has springhalt which would make his hind feet hart to shoe. What’s your opinion on not shoeing?

Howdy Fay,
Cheered me to hear that last story amused you. Me? I was pretty sore with the whole mule-escape thing. Until Polly ran away again the last day of my jaunt. I didn’t write about that one. It’s too hard to stay grumpy so I’ve come around to smiling on the whole incident…
You mentioned traveling barefoot with your Belgians and a camp wagon. While a callous will protect them on dirt and, to some extent, on gravel roads, the thickening is of little protection on asphalt roads. The surface is so abrasive it will wear the toe first, then the heel, down in relatively short order. On fresh paved roads it will take longer. On more heavily graveled paved roads, it happens faster.
Still, hoof boots have 100% solved the hoof wear problem for me. I’ve traveled across the US barefoot and wouldn’t dream of nailing on shoes. Just remember that my animals are relatively small (800 lbs) so I couldn’t guarantee that hoof boots would work on your much larger Belgians. Still, it would definitely be worth trying.
So what’s keeping you from setting out with your rig….? Sounds great. Cheers! Bernie

Thanks for your answer Bernie, just read it today after re-reading your last post, which is still hilarious and peculiarly, um, particularly eloquent the second time round. Thought your answer would arrive by email and that you were understandably busy. I really appreciate your explanations about shoeing and booting. What’s preventing me from setting out is the small detail that I have no camp wagon, …yet. I decided to use as much as what I have on hand after realizing I might want to start with a summer wagon for practice and after finding out from Joe at the shop at Pioneer that I definitely could install mechanical brakes to my old farm wagon. I want to participate in one of Quebec’s wagon trains and they require wagons with brakes. So now, after taking apart as much of the wooden wagon as I could on my own, the running gear now is in itty bitty pieces at the welder’s shop, where mechanical brakes were added to the rear axle, after sitting there for 3 weeks while the corn-seeding rush, tax-time and accounting held up the machinist. That gave me oodles of time to fiddle with the design of my first wagon, the KISS(you know, Keep It Simple Stupid) on Google Sketchup. Suspension will also be added after I make replacements for the rotted-out wooden bolsters. If you are so inclined, you can follow my progress on http://facebook.com/fay.cotton . In the meantime, I’m continuing with my driving lessons. I’m not really in a rush, perseverance will prevail. I imagine you are traveling up along the eastern coast through New Brunswick, or maybe taking the ferry from Bar Harbor, Maine to Yarmouth, Nova Scotia? Hope you get to Maine after peak Black Fly season in mid June. Looking forward to more of your posts,
Fay, Farham, QC