Hiding My Purple Bouquet From 500,000 Bikers

This week I’m in Hill City, SD and I’m nervous. Call me a chicken for being afraid to walk among the projected 500,000-plus bikers that are expected to converge on the Black Hills during Sturgis Bike Week. 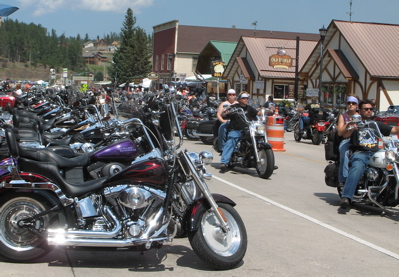 Because I’m the only dude out here dressed in a button-down blue oxford shirt, tan slacks and an off-brand backpack. Don’t think you’d be any braver. You’d be uptight too if you looked like a narc with a rucksack at a Hell’s Angels gathering. Those dudes have big arms, bigger tattoos, and don’t give a damn that you think you’re invincible because you slept in a mule wagon last night. And if they ever got wind that you spent considerable time gathering purple bouquets, why, they’d stomp you before you had a chance to explain it was alfalfa for your mule Polly. 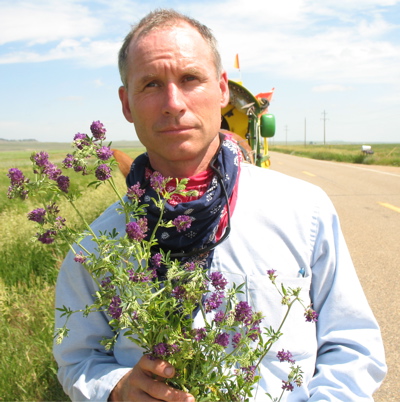 What you don’t want them to see.

“To hell with it.” I decided, shoving my introvert tendencies aside, “I’m going to meet some of these folks.” – before my back pack gets me in trouble.

To fathom this latent fear, you have to understand biker etiquette. When you roll into town, in this case, Hill City, you’re expected to park your super-custom Harley (you are riding a Harley, right…?) at a 45-degree angle to the curb. Then, when curb-side parking runs out, because the streets are blocked to four-wheeled traffic, you park in the row of motor bikes that runs down the middle of the road.

As the day goes on, bikes park closer and closer, especially in that middle row, until the mirrors, many sculpted to look like chromed Inquisition devices, practically touch. 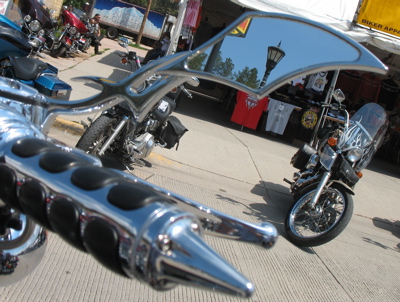 This poses a delicate problem to the blue-shirted, accountant-looking, back-pack wearing type like me. How do I cross the street without my back-pack snagging a battle-axe shaped mirror that precipates a domino-like tumble of $20,000-dollar bikes that runs all the way to a Stop sign? I can just see it, the huge biker-looking dude with the ZZ Top beard at the far end of the row of Harleys I’ve upset barking, “Hey! You in the blue shirt!”

So, because I didn’t want to cower at the sight of every biker taller and hairier than I (which is all of them), I decided to meet the baddest looking biker in sight.

That’s how I met Cowboy. 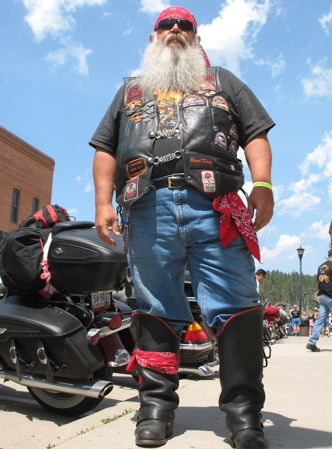 The baddest biker I could find

Cowboy, it turns out, was a soft-spoken biker from Newton, Kansas. His real name was Ron Ulmer and he was in Hill City for the day. In a voice I’d associate more with a jeweler than a Hell’s Angel, he informed me he was just “looking around” like I was.

Then, before I could ask Cowboy what he did in life, an Alice in Wonderland-looking apparition caught my eye – a black top hat perched above red shades and beard trolling down Main Street aboard a motorbike that rattled my ribcage. 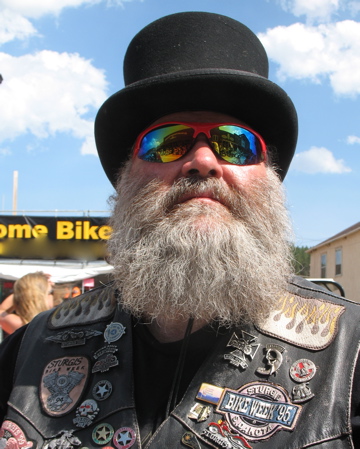 The bike slowed, pulled into a parking spot and guys with full-arm tattoos stared. I’d found my man. Excusing myself from Cowboy, I approached the newcomer and before he could walk away from his bike, beat him over the head with the standard, “Hi I’m Bernie Harberts and I’m traveling by mule from Canada to Mexico and I’d like to take your photo.”

A grin parted the grey beard. This was going to work out…

That’s how I met Tophat.

In real life, Tophat, of Colorado Springs, Colorado, built homes. Fancy homes. Homes for folks like Sylvester Stallone’s brother, and the list went on and I swear I heard the words “Wayne Newton”… “We’re different from other builders because we build the whole home from the ground up.” he said. “That means right down to digging the foundation and laying the block. Most home builders subcontract all their work but we do it all in-house.”

Then talk turned to the bike. 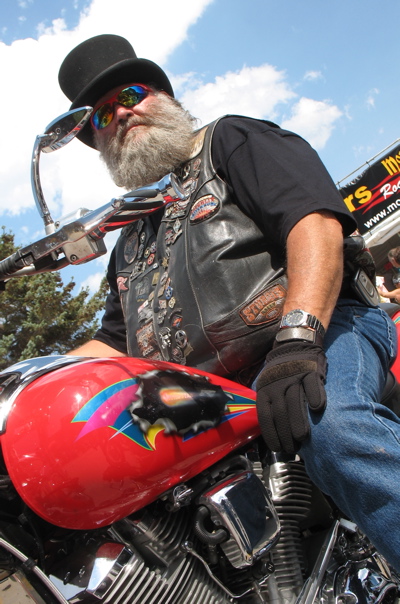 I’d found it curious that for all the free-spirited, independent-living, devil-may-care image that bikers reveled in, they all caved in when it came to bike brands. There was something oddly homogenous, almost lemming-like, in the choices most every biker made about his ride.

Face it, if you wanted to live the rebellious Easy Rider lifestyle, you had to ride a Harley. I found the mass brand-consensus amusing. The Wisconsin bike-maker’s marketers had scored the proverbial ace.

So, I wondered, what kind of Harley was Tophat riding….?

“This is a 1999 Yamaha,” he grinned with a smirk. He tapped the words “Roadstar” airbrushed on the bike’s tank. “It’s a single carb, V-twin, belt drive with ceramic jug linings. That means no vapor lock like you get on the Harleys.”

The bike, he added, had been awarded 1st Prize at a recent bike show that emphasized “style and art, not name brand.” The judges, a home decorator, house painter and chef, chose it best in class – the only non-Harley in the selection. 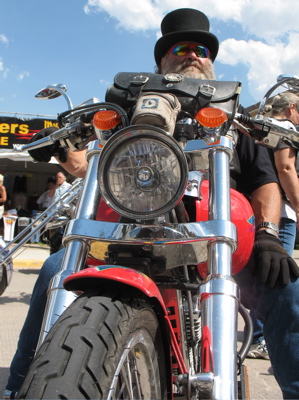 Cool as a Harley – without the vapor lock.

So, now that I’ve talked with some of the bikers in Hill City for the week, I’m not afraid to walk around in my blue, button-down shirt any more. In fact, I have a sneaking suspicion that lots of these leather-clad rollers will be wearing blue button-down shirts next week. Long sleeves will cover up tattoos and voices be saying, “Line One” instead of, “Yep, that’s a pan head.”

That puts me at ease.

The specter of snagging my backpack on a Harley mirror, however, still horrifies me.

(Thanks, Cowboy and Tophat, for peeling back the biker mystique and putting the guy in the blue shirt at ease. Thanks, too, Grant and Kristin of Black Hills Bronze for putting mule Polly and me up while I mingled. Finally, to Pat, Lisa and Marci at Dry Creek Coffeee, three hearty cheers for keeping me in coffee and breakfast burritos. Bernie.)