How Big is Your Escape Pod?

Folks are curious about how big an “escape pod” they need – an escape pod being anything that’ll take them on their dream journey. They often ask me “How long a boat do you recommend for ocean sailing?” or “How big (or many) a horse(s) do I need to go on a long distance ride?”

The answer, these days, seems to be “REALY BIG”. The average length of a new cruising sailboat has stretched to 40-something feet, up 10 feet from 25 years ago. I have to leap a little harder to hurdle onto the average horse these days and it’s not because the springs in my legs are rusting.

Here’s the danger in over-sizing, though. The bigger your escape pod, the less likely it’ll take you anywhere. 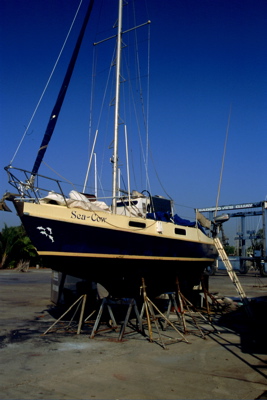 I met Craig of Townsville, Australia, in Darwin, Australia as I was preparing Sea Bird to sail across the Indian Ocean. He was traveling aboard Sea Cow, a Hood 23. The Hood’s a small cruiser, that, technically, is a week-ender sailer. It was never designed for sailing thousands of miles across oceans.

But it’s what Craig had. He bought her because he figured it was better to see the world in his twenties, in a small boat, then wait another 40 years to see it in one that was 20 feet longer.

Because she was so small, she was easily repaired. When he had to replace the centerboard in Darwin, he just cut a new one out of plate steel and bolted it into place.

Then he put back to sea. 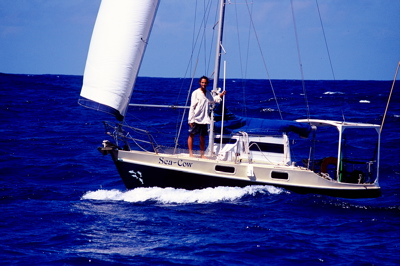 Craig and I left Australia in our respective boats and headed across the Indian Ocean for Africa. We caught up on the island of Rodrigues.

I was impressed by his mettle – how, when his GPS failed, he taught himself celestial navigation – on passage – with no manual. It was as though Sea Cow’s frailty and small size endowed him with an energy never found in Big-Boat sailors.

In Cape Town, we caught up again. He’d sailed non-stop around the Cape of Good Hope – the only person I’d met to do so. Most folks port-hopped around that tip of ill repute.

Then I crossed the Atlantic Ocean from Cape Town, South Africa to St. Thomas, USVI – 65 days. “Good” I gloated, “Craig won’t match that. I’m sure he’ll have to stop in St. Helena for supplies.”

Later I got a message from him to the effect of “Ha ha, Bernie. Beat you by two days…!” Craig had taken 67 days to sail across the South Atlantic Ocean in his 23-footer. From the reports, he’d had a whopping good time. 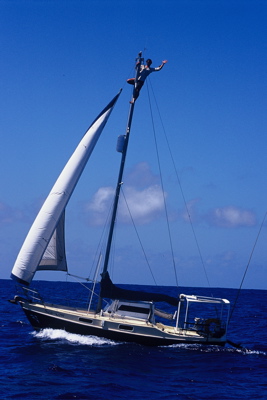 Craig’s back in Australia now. We still communicate regularly. Recently, I sent him a copy of my “65 Days Alone at Sea” DVD and he had this to say:

… when people ask me what it is like to be out at sea for such a long time I play them the DVD. From becalmings to the majesty of the watery universe this DVD will show you just why we do it.

His reply reminded me of how we need to consider the size of our escape pod. I can’t tell you what size boat or horse to buy. Just remember that going smaller plunges you into living, much, much sooner.

Thanks Craig, for the reminder!

To see a video clip of why Craig and I put to sea, and to remember what kind of escape pod you’re working toward, click here to watch some amazing footage…

2 Responses to How Big is Your Escape Pod?