How to Stow Away on a Sailboat

So you want to stow away on a sailboat, eh? Blend in somewhere on something like that salty sailboat I built 20 years ago. See where it takes you.

Damn. Unless you could shape shift into a seat cushion, brass lantern or bronze port, I’d rate the odds of remaining undetected on a 18 1/2 footer as slim to delusional. If you still insist, though, I would suggest seeking shelter in a cockpit locker. Don’t try to hide under the spare line and life jackets. They always get used. Crawl, instead, under the swim ladder. No one ever uses it. 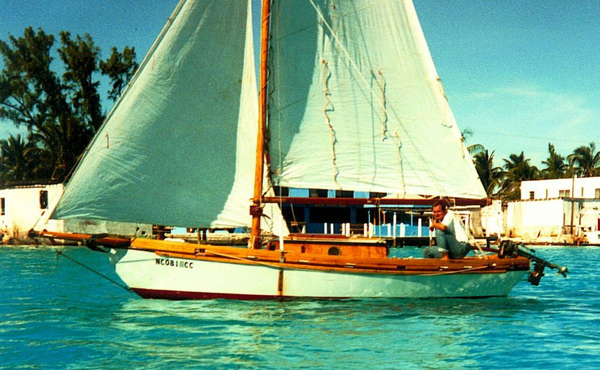 My old gaff rigger “Paulrius” cruising the Bahamas. I built the 18 1/2 footer from scratch. Sewed the sails in a barn with my buddy Mel and turned a cedar tree into a mast. Sure, she looks salty. Like something you could hitch a ride to sea on. But if you were trying to do it incognito, it’d be hard to hide below… 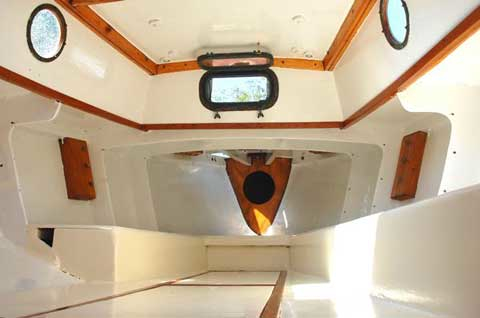 …because I built this boat in my jockey days. Think skinny. Think hungry.
Not much place to hide away down here.

I say before going to the trouble of doing the contortionist thing, ask yourself why you want to run away on a sailboat. Do you just want to go sailing? Then show up at the dock with a grin and a 6-pack. Go with a brew that costs between 7 and 10 bucks. You want to appear fun-loving and solvent, but not too rich or too alcoholic. Steer clear of beers that feature labels with sails on them. Makes you appear desperate.

Follow that advice and you’ll be tuning the mainsheet before your beer gets warm.

Then again, you may be looking for the Grand Maritime Stow Away Adventure. I always am. Here’s how I’d go about it.

If it were me doing the stowing away, especially if I hoped to end up in a foreign port, I’d slip aboard something more upscale, like a Hinckley. Maybe a blue-hulled sloop in the 70-foot Sou’wester range. You know, a luxury sailboat with a few honest to god staterooms. And with a bit of luck, an owner whose parents came to this great country hiding away in a tramp steamer’s life boat (or better yet, an owner with an aft cabin crammed with back issues of the New Yorker, Mother Earth News or Western Mule. Alas, you’re more likely to find a copy of Vogue or Bloomsberg Businessweek on a Sou’wester…)

A proper boat to stow away on – a 70-foot Hinckley Sou’wester. (photo hinckleyyachts.com)

Avoid anything by Hunter, Catalina or Chrysler. Yes, the makers of the LeBaron (cue Ricardo Montalban and “soft Corinthian leather”) had a marine division. They made powerboats and sailboat for years. Some where okay. Others stank. All where small.

No, if I’m going to sneak away to sea on someone’s sailing vessel, I’m going for something larger than I could ever afford.

I’d pack a Leatherman but not a passport.

By now, you’re probably wondering, “what happens when I’m discovered stowing away on someone’s boat?” Probably nothing. Rich sailors won’t throw you overboard. Pirates will. Hunter and Catalina captains will. The French will. But not guys that spend more on their boat than your family tree – the one that links you to Charlemagne – is worth. Especially if you’re a long way from shore. Like international waters.

Remember folks that own multi-million dollar boats are on a schedule. They have cashola but they got that way because they worked hard and they have to keep cutting people open and extracting the money out of them so that Medicare keeps funding their High Life.

I know one. He complains that, in Paris, coffee costs 5 Euros. He uses the word “Euro” to let me know he’s worldly. He pulls down thousands of dollars per week but only takes off 12 days per year. He could afford a Hinckley. He could afford 100,000 cups of Parisian coffee. But he can’t afford to spend an extra day kicking you off his boat. Especially if he discovers you while sailing far offshore. That would mean putting in to port to show you the exit. Where his smart phone would inform him he was needed and his vacation would be over.

So when you get discovered, act purposeful. Tell whoever found you that you were adding the 15th coat of varnish to the Burmese teak fiddle rail. Tell them you’re with Hinckley and you’ve been inspecting the rudder tube – for leaks. Trust me. They won’t throw you off. (They will, however, if you tell them you’re an IRS agent.)

Maybe it’s the delivery crew, the surgeon’s hired monkeys, that stumble across you. Stress not little stowaway. They’ll be happy for an extra set of hands on deck. Frees them up to pillage the supply of Maison Veuve Clicquot while you fill out the Ship’s Log.

Figure 10 days to get from temperate climes to the tropics.

If you land in a foreign country without a passport, Customs probably won’t let you in. But since you and your Leatherman were so helpful on passage (pried that piece of flying fish out of the cardiac surgeon’s flabby throat. He didn’t know you were kidding when you described the fish as a hot dog with a bone….) your host might spring for a plane ticket home. If not, go stow away some more.

Just beware the Dock Queen. She’s the largest sailboat at the esteemed Blue Bloode Marina. There’ll be a cocktail party going on aboard and you’ll insert yourself in the guest state room shower. You’ll wait and wait for the sound of highball glasses to give way to hoisting sails. But it’ll never happen. Damn.

I could have told you those sailboats never do anything exciting. They’re just floating bars for the rich and their dreams of running away – one day.

Don’t beat yourself up. Join the crew for a drink. Jump overboard if that doesn’t pan out. Then go find yourself another ship.

Which begs the question. Where the hell where you in ’98 when I was looking for someone to sail away with? Someone to pop their head out of Sea Bird’s aft hatch, thousands of miles at sea, and ask, “are we there yet?” Would have freaked me out, your introducing yourself like that. But after you convinced me you weren’t a member of the “Mary Celeste”‘s crew we’d have gotten on fine. 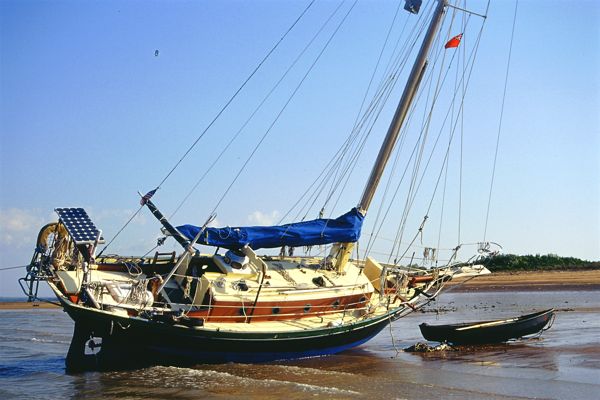 Sea Bird, the 1984 Colvin that carried me around the world from 1998 to 2003. Here, she’s careened on Mandorah Beach, Australia, across the harbor from Darwin. Getting her on the beach was easy. Pulling her off – even with the tide’s help – proved tense.

Then again, you could have chosen the time to make yourself known when Sea Bird ran up on the beach in Australia. The time I careened her pirate style to apply bottom paint. In which case I’d have put a scrub brush in one of your hands and a VB lager in the other and we’d have scrubbed away like Aussie convicts. Really, how bad would that have been….?

Hope this gives you some notions. See you out there.

Map note: the map shows where I careened Sea Bird on Mandorah Beach, outside Darwin, Australia. Hint: never stow away on a sailboat with a foul hull, two gallons of bottom paint and a new scrub brush.