Recently, while I was camping in the Tassie bush, the leeches had a go at me. Curious, I decided to start asking Tasmanians what they knew about these critters. In St Mary’s, the first town I got into after my walkabout, while looking for a fuel bottle for my Optimus stove, I ran into Ian Summers. 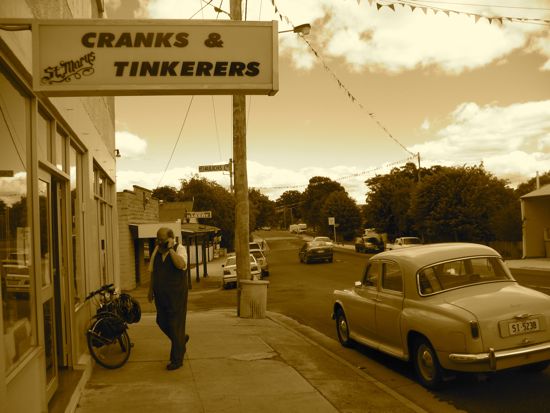 Ian Summers steps into “Cranks and Tinkerers”, his monument to things past

Ian operates “Cranks and Tinkerers”, an incredible collection of things mechanical, literary, acoustic and eccentric- from a Ford Anglia to “Advanced French for Sophisticated Cats”. And while, no, he couldn’t sell me a fuel bottle, he did invite inside for a gam. After covering banjos, flying boats and polishing off a plate of scones and jam – but before we got to discuss the World’s Worst Orchestra (According to the book “The Book of Heroic Failures, it was “Sinfonia”…) – I picked his mind on leeches. 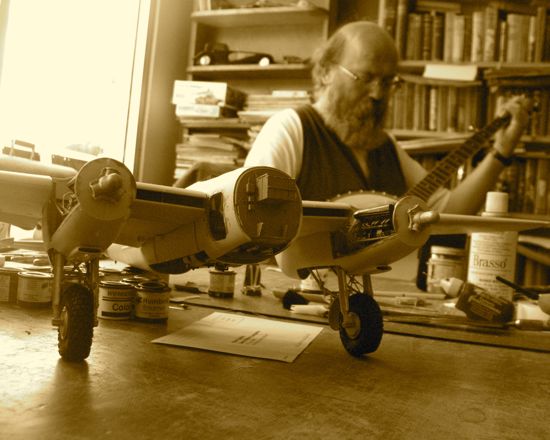 Bomber and banjo: Ian at his deck with two of his favorite things in life (okay, there are hundreds…). The scale model in front of him is a 1/24 scale de Havilland Mosquito fighter-bomber. He alludes to this during the interview you’re about to hear.

In a moment, you’re going to hear Ian talking about these little blood suckers. But first I have to set the scene for you.

We’re in Ian’s exhibition hall. A few visitors are strolling around chatting softly. You’ll hear them in the recording. I’m sitting across from Ian who’s sitting at his wood desk. In front of him, on his desk, is a 1/24 scale model of a World War II de Havilland Mosquito fighter-bomber. He’d just attached the wings to the fuselage but the engines were still exposed. When I ask him to describe how long a leech is, talk swerves to the plastic model plane – specifically the cooling system delivery pipe. Then the dialogue veers wildly to the Duke of Edinburgh’s plane trip. Then returns to leeches. Takes off on another tangent. All in all, a damn funny and informative way to listen to Ian, a teacher in St Mary’s, offer his take on the Tasmanian leeches. 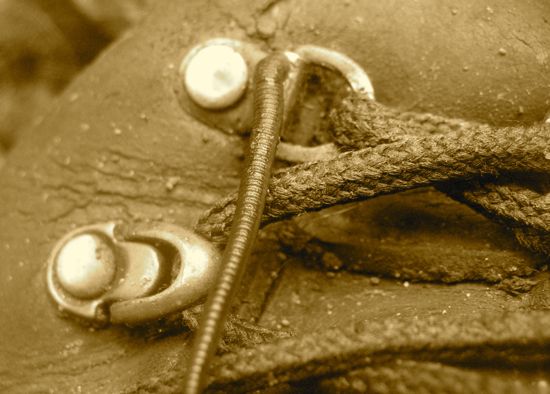 Looking for a feed: an Aussie leech on a Yank’s boot – mine. 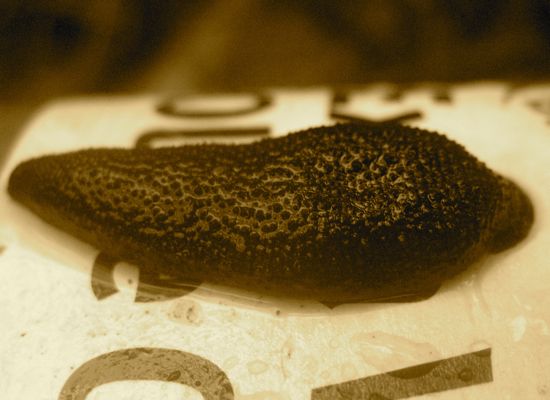 Aussie lingo alert: when Ian mentions “thongs”, he’s not talking Victoria’s Secret. He means like what you wear on your feet to the beach.

So here goes. As the interview starts, I’ve just asked Ian to state his name, and what he knows about the Tasmanian tiger leech. To take it from here,
click on the player below.


Thanks Ian, for a great interview. Also, a hearty, well-fed thanks to Beth Elliott who treated Ian and I to a plate of fresh bakes scones complete with marmalade and whipped cream. And for folks visiting St Mary’s, Tasmania, be sure to drop by Ian’s “Cranks and Tinkers” exhibit on main street. If you ask nicely, he may even play you his banjo or guitar.

What a character Bernie! Man knows a little about a lot. Is the airplane a kit, or is he building it from scratch? Neat stuff and good info for walking the bush around, say Hobucken. At least they don’t carry desease like our ‘sqitters ………

Very funny interview! Glad you’re making progress in Tassie and the ten buck bike is still holding together. I met you at the campsite in Southport. I was the guy trying to get to Antarctica by boat after travelling from Riga, Latvia without flying. Never did find a boat!

A useful bit of information – there’s a free hot shower in the toilet block opposite the police station as you come into St. Helens (if you head that way)! The tap says it’s cold but it’s hot! Plus the fish n’chip shop nearby was pretty tasty.

A vagary of thought and a puff of wind sent me to the computer to check on you, and I discover (to my horror) that you’ve abandoned the finest form of travel ever discovered by man in favor of one of the worst; in my youth I had a lovely green-eyed blonde-haired German girl as a paramour, and so deeply in love was I that I abandoned good sense and pack stock in favor of BECOMING the pack stock and adopting (at her urging) backpacking as a form of transit, and that ranks above bicycling in my personal pantheon of torturous methods of locomotion, but only just; whatever madness has overtaken you that has led you to forsake the pleasures and companionship of saddle animals in favor of grunting your way along, head hanging, chest heaving, eyes blinded by sweat and tears (and blood on the longer ascents, for all that I know) hopelessly intertwined with a piece of mechanical deviltry like a bicycle?

Despite the dewanee, however (doubtless contracted by the bite of a rabid marsupial, seeing that there are no dhole in Tasmania to my knowledge) it’s lovely to see that you’re still amusing and bemusing whatever populace you happen to come into contact with, and even better finding yourself amused and bemused as well.

I like the sound of Ian; tell him that if he ever happens to be in the South-eastern portion of the Arid Zone he’d be very welcome in the adobe (provided that he didn’t mind the dead coyotes and puppies and whatever else happened to share his lodgings at the moment).

And speaking of lodgings, I’m contemplating a Hyperadobe addition this Spring and Summer, which ought to be a fascinating construction job; I began planning along the semi-conventional lines of a stone and big timber construction, moved through concrete slabs and adobe and tinned shed roofs, and now find myself happily settled on tamped and compacted dirt floors (quite possibly bound with animal blood in the archaic traditional fashion}, flexible-form adobe walls, and a mirrored earthen roof (mirrored in the sense that it mirrors the floor; not some swinging-singles fantasy construct) that, if all goes well, might support enough grass whereon to graze a goat (also in the archaic tradition).

Via con Dios, compadre; I’ll have to remind myself to check in more often (again).