In my early twenties, I ran out of money, girlfriend and plane ticket in Tuscanny, Italy. For just on a year, all I had to my name was a few lira, a jug of chianti and a battered copy of the Nitty Gritty Dirt Band’s “Will the Circle Be Unbroken”. Over and over I’d listen to that tape. I especially enjoyed the parts where the band is sitting around talking with other musicians. You get snippets of legendary voices – Doc Watson, Emmylou Harris saying “we’ve lost the living room…”.

Flash forward 20 years. I’m in Tasmania, feeling my way around the island state with a jalopy bike, a box of wine and, instead of a box of cassette tapes, an audio recorder. What’s changed is now I record life, not just listen to it.

Recently, I had the chance to record a fine jam session with one of the finest entertainers I’ve met in my travels, Ian Summers of St Marys, Tasmania. 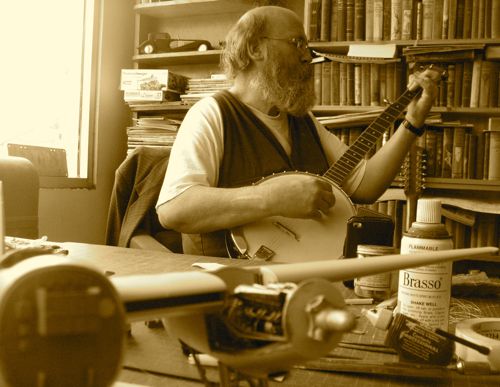 Ian Summers with his banjo. In front of him is a model airplane he’s constructing (St Marys, Tasmania)

I met Ian while doing interviews on leeches. An expanisively conversational man, the talk turned to music, proverbs and fighter bombers . Then Ian pulled a banjo from behind his desk and started playing. Between tunes, customers would drop into his “Cranks and Tinkers” museum. So he would launch into another discourse.

All and all, a delightful way to spend the afternoon. Better yet, I felt like I was included in the conversation I’d heard so many years ago on that beat up Nitty Gritty Dirt Band tape.

One of the things that struck me is how you would hear them pick at bits and pieces of a song, then talk a bit and move on to more musical bites. Sort of like they were having a taste, then moved on – and you got to sit in on it. In some ways, the intensity of those pieces was more satisfying then hearing the final product. Like sometimes a sketch or bit of line art captures the spirit more than the finished piece.

I got the same sense while visiting with Ian Summers. In this recording you’re about to hear, he throws in a bit of bluegrass technique, which leads to a bad bumper sticker joke, which triggers a run at Dueling Banjos and mention of Doc Watson. Ready to listen in on how bluegrass sounds down Tassie way? Then pull up a chair, hit the player below and enjoy…

Map note: the map below shows where this inteview was recorded in St Marys, Tamania

You had hinted at Tasmanian bluegrass a few posts ago. I’m glad you took the time to post it. I’m a bluegrass banjo picker myself, and it’s great to hear our one and only truly American music played halfway around the world!

Keep the journals coming. I’m enjoying them all!

hi bernie still great to hear that familiar twang from an instrument that hints of basic living and loving. Ian sounds like an extraoardinary guy. thanks for the post.
peta