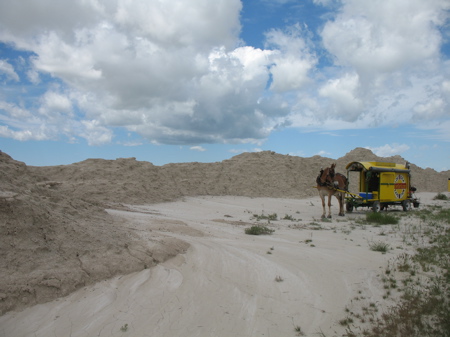 Into “les mauvais terrers a traverser”
Outside Scenic, SD

The early french trappers called it “les mauvais terrers a traverser” which in mule-traveler speak translates into “bad land to travel across”. This week mule Polly and I entered the South Dakota Badlands…. 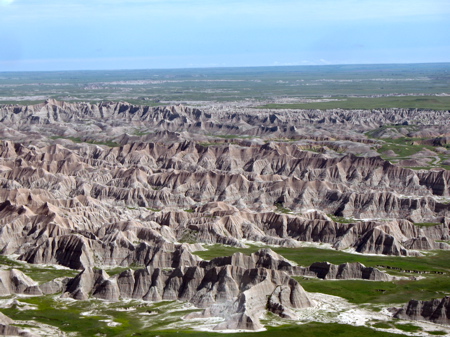 Badlands from 2000 feet
Outside Scenic, SD

75 million years ago, a shallow sea covered South Dakota. As the marine creatures died, they settled into the muddy sea floor where some fossilized. Millions of years passed. The western North American continental plate rose, draining the sea south into the Gulf of Mexico. Eons passed. Erosion from the Rockies covered the sea floor with hundreds, in some places thousands, of feet of silt.

Now flash forward to the the 1700s. French trappers, among the earliest white men to travel across South Dakota, encountered the layers of silt and erosion. “Les mauvais terrers a traverser” they called it – “bad land to travel across”.

Then, in June 2008, another white guy entered these Badlands with his mule Polly and wagon. That would be me

Rolling and bumping across the eroded wreckage of a vanished sea, I’m learning the latest name for the area. “Back in the fifties, when we went to school, they called it the Great America Desert” Ben Ahrendt of Scenic, SD told me. 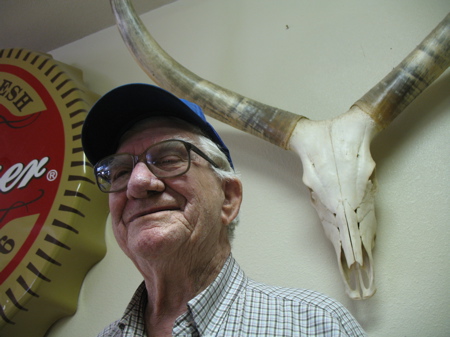 Receiving an average of barely 12 inches of rain per year, the South Dakota Badlands have been in a drought the last eight years. From 2000 to 2008, it’s been so dry most ranchers haven’t been able to make even one cutting of hay per year. Then, in May 2008, the precipitation started. Rain, snow and hail have bombarded the area, producing flash floods, hail damage, and yes, green grass. Finally the cows have something to eat. 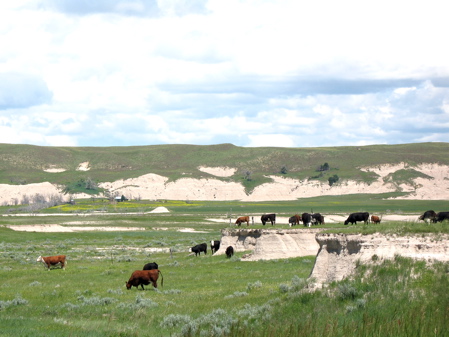 This is hard ranching country. In a good year, it takes 25 to 30 acres to support a cow and calf. In a bad year, hay has to be trucked in, or worse, ranchers have to sell their cattle. 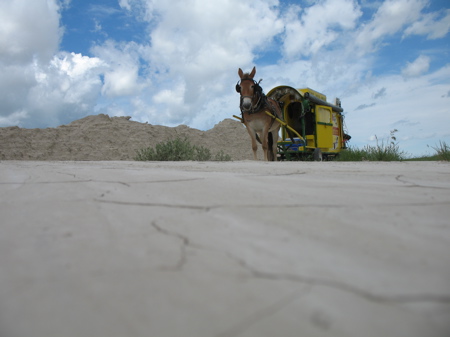 Still, Polly and I couldn’t have chosen a better year to enter this arid country. Currently averaging 12 miles per day, I’ve witnessed the land change from Ponderosa pine forests in the Black Hills, 60 miles to my West, to eroded spires and flat top tables. So far, the water has held up. Polly drinks 5 to 10 gallons of water per day, much of which she finds in ditches and stock tanks. Still, I carry 4 6-gallon water jugs on the back of my wagon. Currently, only one is full.

That means instead of chasing water, I can spend the time photographing and filming the land the french trappers dreaded.

My favorite shooting vantage point? The top of the Lost Sea wagon. With the tripod straddling the wagon’s solar panel, I get just enough loft to shoot earth, sky and the crumbling remains of the long-vanished lost sea. 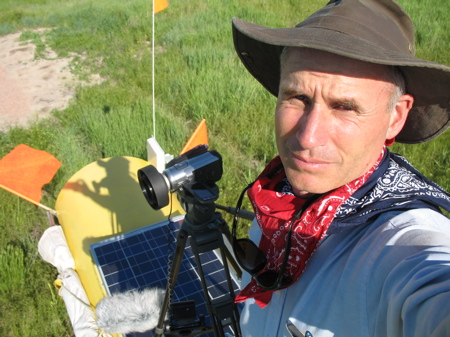 I’d like to thank Bryce Nelson for taking me flying in his Piper Cherokee. A Rapid City realtor, Bryce was good enough to haul my film gear half a mile into the sky for some great aerial shots. Yep, I’ll be sharing more of those photos with you as I head East across the Dakota Badlands. 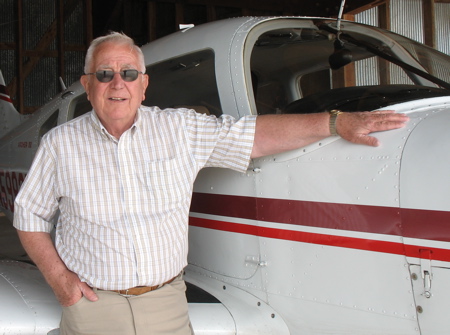