It's Not's What's Over the Door

This week I went rambling in the Uwharrie Forest with Polly and Buddy, my mule companions. Just the three of us, 100 miles of road and a bit of gear: hammock, sleeping bag and string. No great mission. Just two mules and a man out clearing his head.

Days, we traveled the back roads. Nights we camped with friends new and old. The second night I slept in a hammock tied to Wayne Hussey’s corn crib. 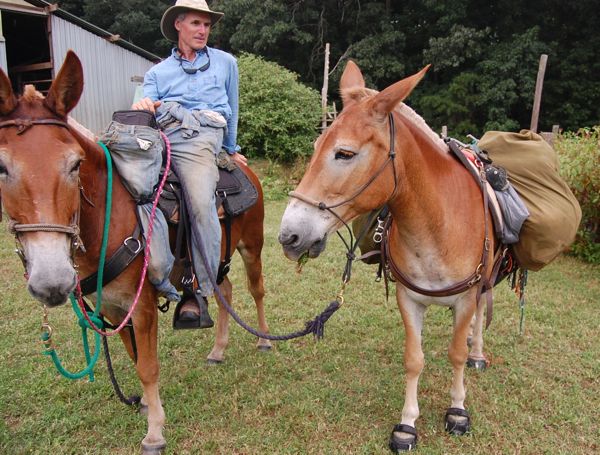 My ramble mates Buddy and Polly. Buddy carried yours truly. Polly hauled the week’s supplies. There was no chase vehicle following us. (Ronald Hudson photo)

Wayne lives and works the red clay land south of Erect, North Carolina. He still farms with mules – five of them. Plants corn. Cuts hay. Harvests the corn and stores it in his old timey corn crib. Weekends, if there’s a parade in nearby Robbins, he might hitch his mules and travel there by wagon. If there’s nothing special going on, there’s always cultivating, harvesting or plowing to be done – with mules of course. 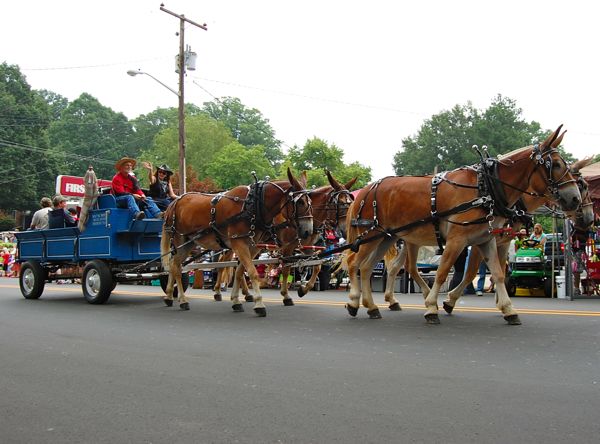 Wayne Hussey driving his mules in the 2013 Robbins Farmers Day parade. Wayne is the only teamster I know that consistently – and safely – drives a four-up team in public. Wayne says the secret to their good behavior is “red dirt”. By this, he’s alluding to how much red clay this team has plowed on his farm. While many teams prance and misbehave, this one is only too happy to stand quietly. After a long day in the fields, the last thing they have extra energy for is misbehaving.

I reached Wayne’s late in the afternoon. Unsaddled my mules. Picketed them out. Walked over to the old red barn to see how his mules were doing. Check if they were still listening to that church music.

I’ve known Wayne for years. Two things about him are always the same. His mules live in a red barn and they’re always listening to gospel music. It comes from the old radio parked high on a dusty shelf overlooking the mule drawn manure spreader. That radio’s played in the barn so long, I swear if you turned it off, the music would keep coming out of the beams and siding.

Just as I expected, as I neared the barn, I heard gospel music. 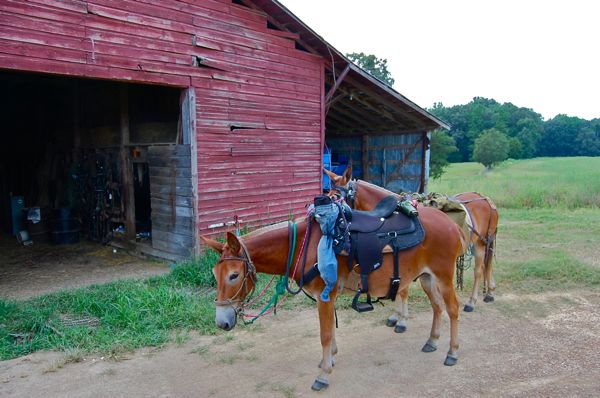 Buddy and Polly outside Wayne’s barn 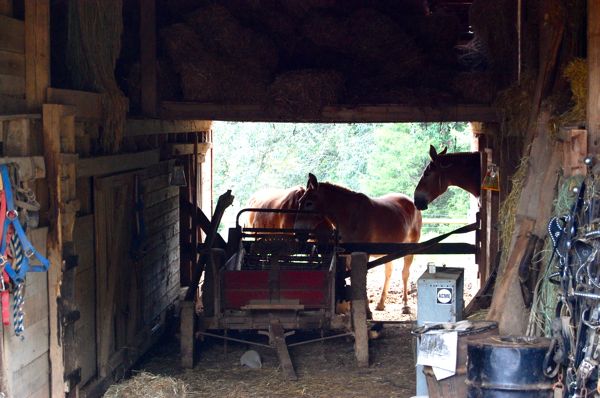 A glimpse inside. Can’t you just hear the gospel music? 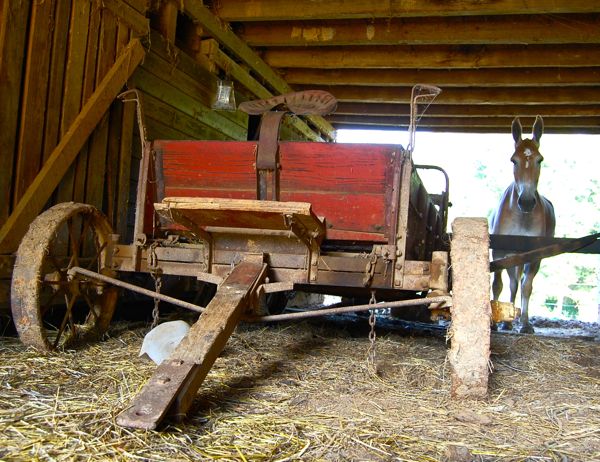 Wayne’s manure spreader is ground driven. That is, it relies on forward momentum and gears to power the rotating spreader that slings the cargo across the field. It can be pulled with horses, mules or, in a pinch, a tractor. If equine powered, the driver sits on the metal seat on the front of the spreader. He rests his feet on the wood footrest above the tongue. Levers on either side of the seat are used to operate the spreader.

The music coming from the barn wasn’t the canvas shredding, raise the roof, tent revival, Come to Jesus, love offering kind. No, it was that swingy, catchy brand that, if old line Baptists didn’t think it was a sin, could result in a dance breaking out.

Playing was “It’s Not What’s Over the Door”.

The rhythm got in my dusty hair, wind burned eyes and dirty coveralls. It wafted all around me and made its way around the barn and washed over the collars, hames and bridles piled in the saddle room. The notes drifted up to the hay loft, way high up where the square bales rub against the rusty tin and mud bird nests. Pooled down low, too, around the mules’ feet and the new litter of barn cats. Made me want to wrap whatever I could find up in my arms and waltz across the dusty aisle.

Which if course I didn’t because I was alone and barn cats are never in the mood to dance.

Still, I liked the song and made a recording of it for you. You’ll hear part of it in a minute.

The song played itself out and I put my recorder away and went about my evening chores.

Central to Wayne’s farm yard is the corn crib. It’s just a square box of wood, wire and tin. Roof on top. Been added to over time. The type of building folks built when the plans were in their head, not on paper or a computer. They cut their boards by hand so the building wasn’t too big at first. Over time they added to it. Scabbed a lean-to to this side. Then another on that side. Over the years, what had been started as a crib to store corn morphed in to a barn full of dusty farm equipment – auger, combine, corn picker. 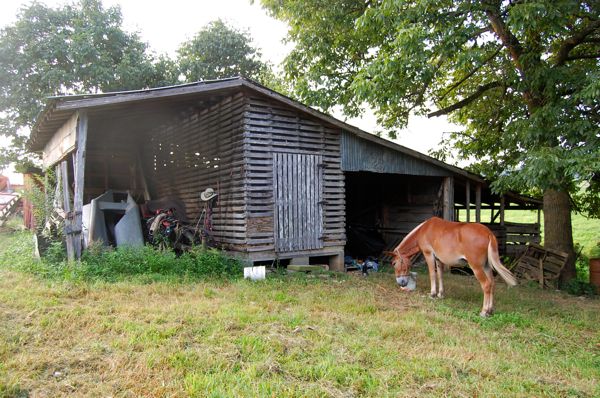 Wayne Hussey’s corn crib. The corn is stored in the slatted portion of the building. The overhang on the right side – above mule Polly’s neck – is where I hung my hammock and took in the corn crib night life. 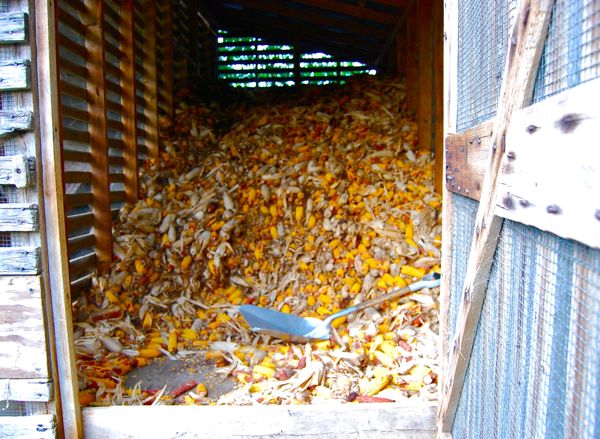 Inside the crib. If you were to step inside, you’d be faced with a snow storm in reverse – thousands of tiny white flakes flying heavenward. Those would be corn weevil moths.

After leaving the barn, I grubbed some corn from Wayne’s crib. Fed it to my mules. Wayne said it would be okay. Then I filled up on well water, hung my hammock from the corner of the crib and crawled in for the night. 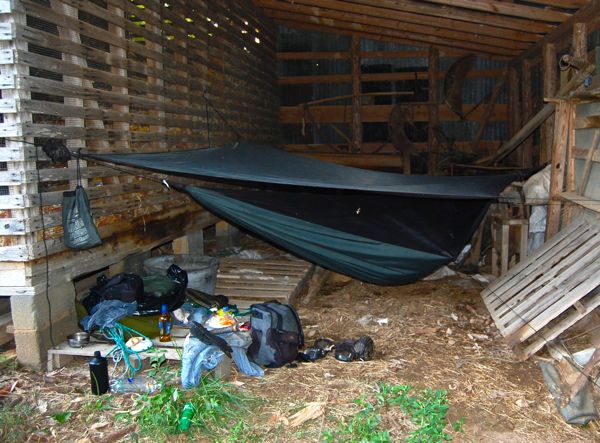 My tiny home in the air. The hammock is covered in mosquito netting to keep the blood suckers at bay. The rain sheet, stretched above the hammock, wasn’t needed this night.

I lay there in my hammock waiting for night to come. Thinking of my guest status. What it was like to hang out there in the night sky surrounded by gospel music, corn and bats.

It got dark. My hammock world turned black and I could hear the gospel music coming from Wayne’s barn. Here’s what was running through my head. Yes, the music you’re about to hear is the tune I recorded in Wayne’s barn. Listen for the grasshopper.

Up next, more photos of Wayne’s corn crib and life on the road with mules. 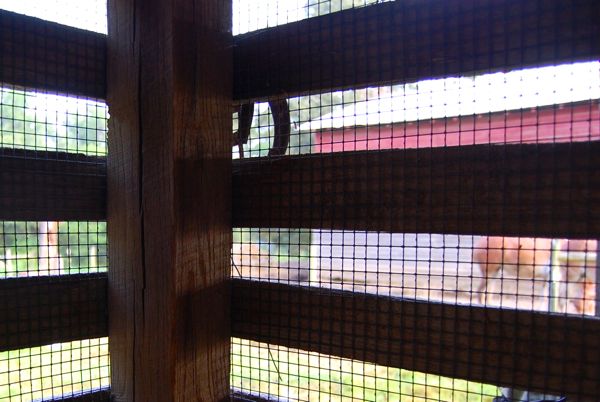 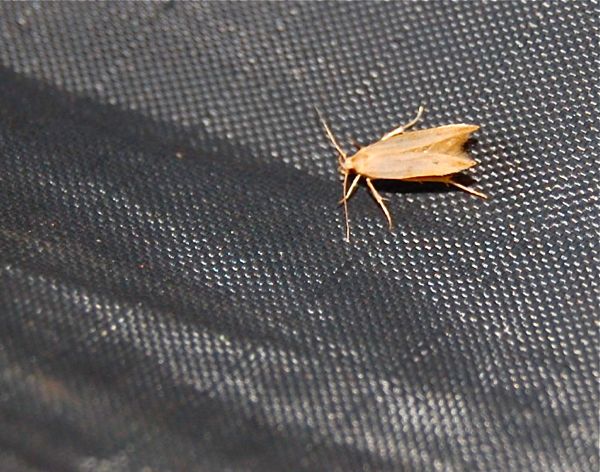 Corn crib moth. It comes from a corn weevil. Neither names are scientifically correct. It’s just what I hear folks around Erect call them. The night after I heard all the fluttering over my hammock, I woke to an odd scene on my rain sheet. The rain sheet covers the top of hammock. The fluttering was the sound of bat wings. The rain sheet was covered in moth wings. They were the size and texture of sun flower seed skins. The bats had eaten the flying weevils and, finding the wings unpalatable, let them fall on to my hammock. 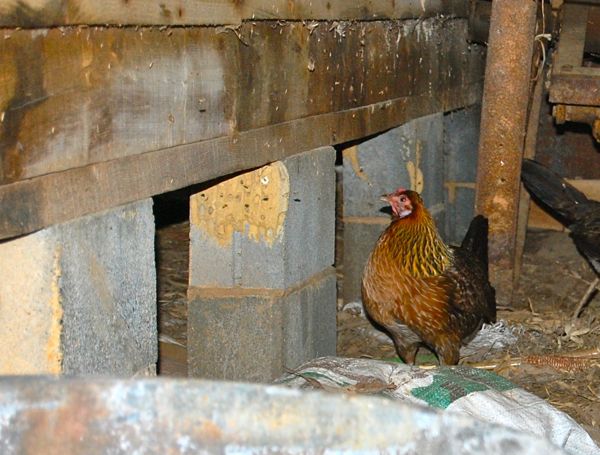 The weevils eat the corn and turn in to moths. The corn crib chickens, in turn, eat the moths. Here, a hen takes a break from stalking her winged snacks. The moths are visible as light specks on the heavy beams that serve as the corn crib base. 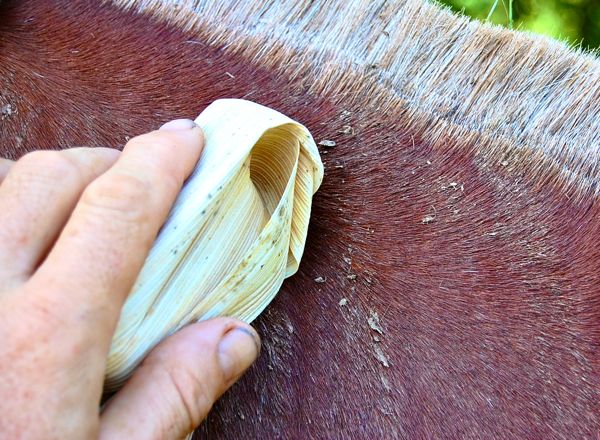 Edible grooming attire. The ground around the crib is littered with corn husks. To reduce weight, I do not carry a grooming brush. I rely, instead, on whatever I can find to knock the dirt of my mule’s coat – pine cones, branches, clumps of dry grass. Here, a corn husk is used to rub dirt from Polly’s coat. After I groomed her, she at the husk. Now that’s travel efficiency. 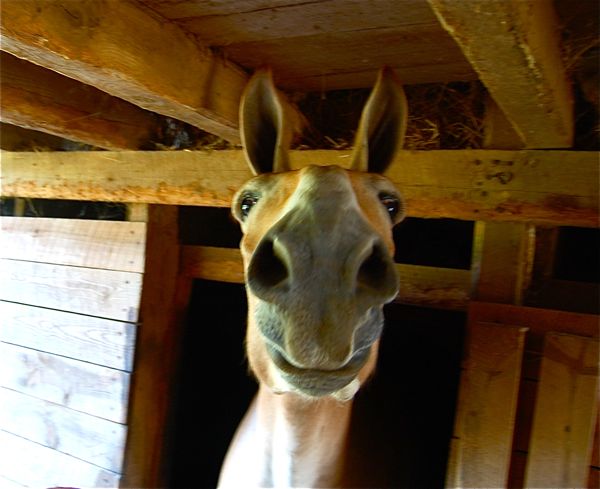 Please don’t go! One of Wayne’s mules begging for attention. Okay, I was holding an ear of corn in my hand. 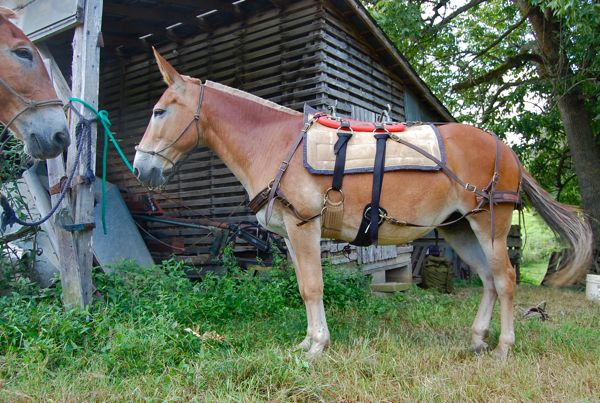 Farewell corn crib friend: Buddy and Polly prepare to tackle another day on the road. Polly is already wearing her pack saddle. The only thing left to do is strap on her saddle bags and …. 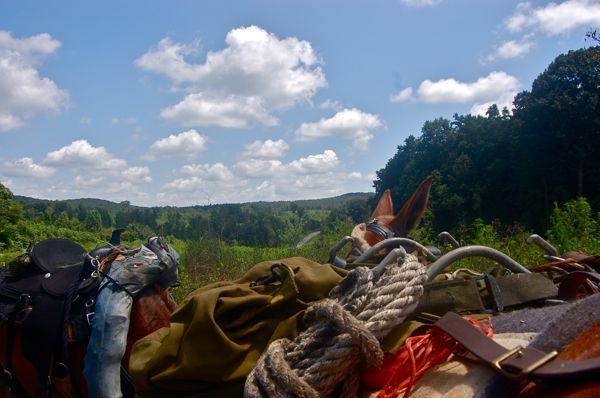 …hit the road. Though increasingly rare, dirt roads still crisscross some of the Uwharrie Forest, just west of Wayne’s home. This leads to some beautiful rural surprises like…. 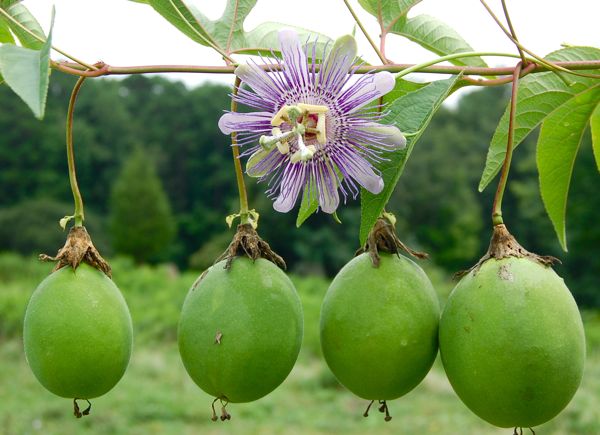 Great story – wish I was on the road with you and your mules. I probably would prefer the company of the mules. No offense. 🙂

I happen to have a mule that Wayne Hussey broke to work. I ride him now and he has a great deal of manners on the ground. Wayne must be the real deal—I’ve never met him, but his talents with mules is legendary!

Michelle,
Great to hear you ended up with one of Wayne’s mules. They’re some kind of broke. I had the pleasure of driving one of his teams years back. If you’re ever in his part of the county, be sure to drop by. Better yet, saddle up your mule and pay him a visit that way. I’m sure he’d let you hang your hammock in “my” spot next to the corn crib! Cheers. Bernie

One Response to It's Not's What's Over the Door