John Henry was saying, “The last polymath was …” but the clanking gears in my brain drowned him out. They were too busy working down the names he’d threaded into the last five minutes’ conversation.

Just when my brain got the mess untangled, the flash of silver caught my eye. It was John Henry’s skinning knife relieving a coyote of its jacket. 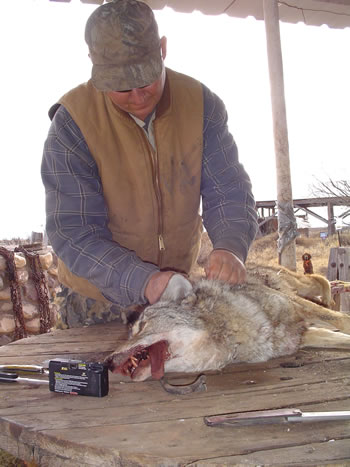 I’ve never skinned more than a knee but John Henry slipped gracefully from philosophy to the job at hand.

The coyote was stretched across an old wire spool, the wooden kind the phone company uses. “I like to skin mine out lying on their side. It takes me ten or fifteen minutes per hide”.

After the fur is separated from the carcass, John Henry puts it in to the washing machine outside his front door. As the fur is churning to clean, he invites me inside.

John Henry lives in an old adobe trapper’s cabin among a riot of books, hunting supplies, mules and Sterling MJ 600 traps. Containers of “Barnes Rifle and Handgun Bore Cleaning Solvent” and “Tetra Gun Lubricant” mingle freely with old friends like “The Milagro Bean Field War” and “The Fourth Hand”. There’s a soft whining coming from underneath his bed that says “puppies” and the crackle from his wood stove spells “mesquite”.

But where John Henry really excels is calling coyotes to decoy dogs.

He uses an electronic hunting call, usually the one that sounds like a wounded rabbit, to lure the coyotes toward his blind. When a coyote is sighted, he sends out one of his Airedale Terriers to greet it. The coyote, sensing competition from another carnivore, approaches the terrier.

The coyote begins playing with the dog.

Ever closer to the blind comes the coyote.

Then “Blamm!” barks the Remington 17 and the game is over.

“I like the Rem 17 because it doesn’t make a big hole but still vaporizes the coyote’s insides”. Not ruining the pelt matters to John Henry. A decent hide fetches twenty to twenty five bucks these days.

What began as an overnight invitation stretched to five days. I learned how to skin a coyote in under two minutes (tip: use a come-along and a doorknob). What you call the technique (“tube” or “case” skinning). And how not to set a Sterling MJ 600 trap (tip: don’t set it where it’ll get run over). 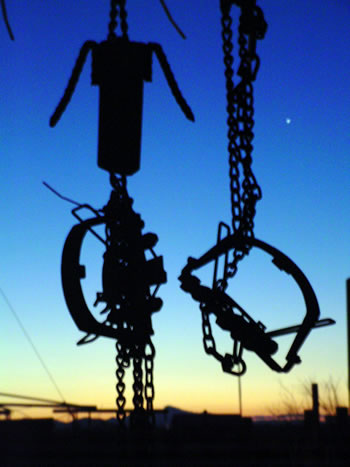 I learned that education and career aren’t incompatible. I learned that the love of books and quotes shouldn’t interfere with the hands on lifestyle.

Which cheered me greatly as I bumped off toward Tombstone with my head full of new quotes and “The Milagro Beanfield War” in my saddle bag.

(Thanks John Henry and Matt for the bed and the books and the roof! For those who want to know more about John Henry’s innovative hunting techniques, visit his website coyotegods.com.)