Journey's End: Making the Other Side – San Diego, CA 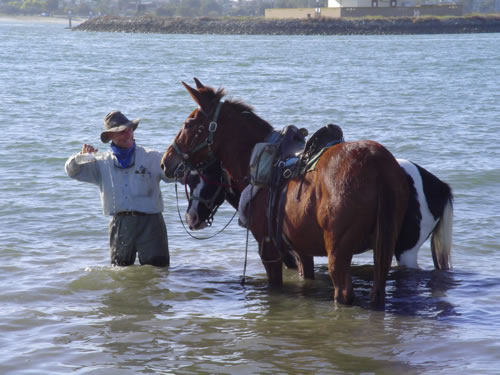 After thirteen months on the road, mornings start like this.

I draw the needle from inside my hat band, thread it with dental floss (waxed) and suture the newest rip in my britches’ seat.Then I tuck my shirt in with greatest care, making sure the tail reaches well south of the repair in case of floss failure. I’ve long given up underwear. I’m down to an extra blue shirt, two bandanas and a pair of socks, none of which I fancy sacrificing for a last ditch patch job.

So this morning I did the obligatory three inches of suturing.

But this morning is different. It’s my last day on the road. 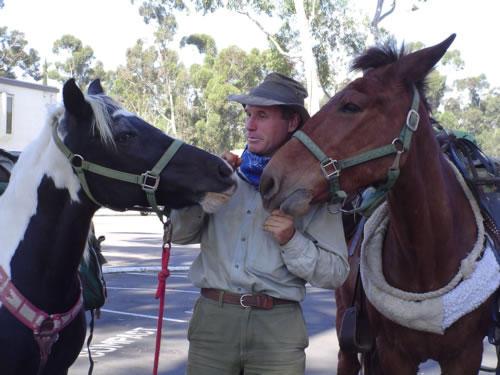 Woody and Maggie inspect what’s left of Bernie’s wardrobe (actually, they want a bite of that apple)

“Hurray!” I think as I take a bold stitch-ripper of a swing into the old McClellan saddle. But the dental floss holds and I set my sights on the Pacific Ocean.

Woody trails Maggie down the sidewalk into a blurred onslaught of car hoods and roaring Goodyears and pointing mothers. We’re in San Diego now. Drivers smile over outstretched fingers while their passengers unfold cell phones and stretch them my way for a windshield shot. I’m out of the desert now and I feel that warm love for strangers after months alone on the road.

I rein Woody toward the Taco Bell drive through, not so much for nutrition, but for one last jag of entertainment.

We cue up behind a blue Dodge 2500 pickup that’s just ordering breakfast. “Hello, may I take your order” the speaker blurts into his window. And then there’s the muffled “Yes, I’d like a …” coming from the cab. “Your total will be…” rattles from the metal box and the Dodge creeps forward.

Now it’s our turn. I lean down from the saddle, eager to speak to someone, even a canned voice in a box.

Silence. Then some static from the speaker.

“Oh well” I think, and ease Woody and Maggie up on the Dodge’s tailgate. The Dodge picks up his order and drives off.

I ride Woody and Maggie up to the window.

“Yes, hello, I’d like…” and before the bean burrito bit gets out all Hell breaks loose.

“Oh my God! Look at this!” cries a teen-age voice that’s never seen an Amish mule up close and certainly not one asking for a burrito. And that clears the kitchen because now every burrito roller and coffee pourer is stuffing himself into the cashier’s cubicle to see what just rocked up to the take-out window. On the other side of the counter, customers strain to see why their service just disappeared.

The side doors to Taco Bell fly open, spilling kids and secretaries and wait staff out into the drive-through lane. “Wow, they’re so big!” I hear followed by “Hey, can I pet your horse?” and “What are their names?” and then come the fingers.

For a few beautiful moments, an old mule and his pony brought a San Diego drivethrough to a complete equine gridlock. Cell phones were slipped back into pockets and breakfast burritos were put back into white bags so hands could run through manes and tails and forelocks.

Then the novelty wore off and we all rode off to where ever we were going before hunger and curiosity struck. 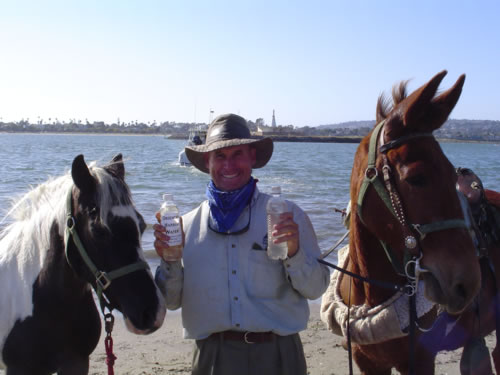 Maggie, Bernie, Woody, and two bottles of water at the Pacific

At precisely 6:42 PM, Woody, Magnolia and I waded into the mighty Pacific Ocean.

I reached into my saddle bag, drew out a small bottle of water and began pouring. It was a bottle of Atlantic water from the town dock in Oriental, North Carolina.

As the arc of water splattered into the ocean, I remembered how it started.

It was just going to be Woody and I alone. We were going to walk four hundred miles across North Carolina… in two months. But then Maggie showed up, things spiraled out of control, and thirteen months and thousands of miles later, here we were wet to our knees on America’s far shore.

Now Woody and Maggie’s journey was through. After a year of winding through snowy mountain passes, shimmering deserts and Taco Bell drive-throughs, we’d reached the other side.

Then I drew out another, empty bottle. I unscrewed the cap and held it under water.“Glue, glue, glue” burped the air from the mouth and as the bottle filled a peace washed over me.

And a plan too. Now I have to get this bottle home. 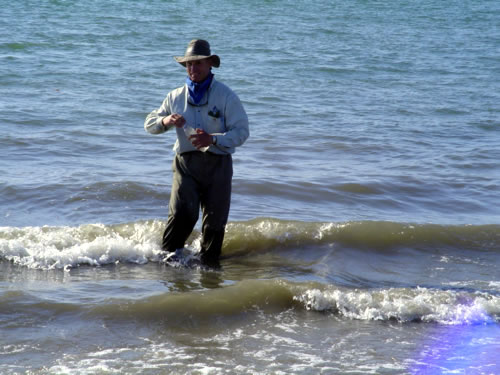 How is this bottle going home?

(Post Script: Lest you think Woody, Maggie and I just waltzed effortlessly to the beach, well, it wasn’t like that. Like the whole journey before, lots of folks lent us a hand.

So thanks Bill, Dina, Don and Regina for putting us up. And thanks, too, Jess and Erin for riding out (and photographing) our Pacific arrival.

And finally a tip of my battered stockman’s hat to Lisa, for guiding us in from the other side.)