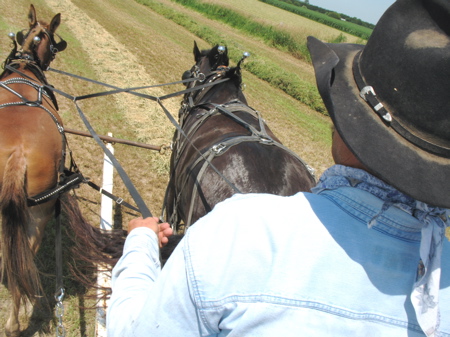 High gas prices got you swearing you’ll go back to mule wagon? Well, before you call me about trading in your vehicle, come rake hay with mule Polly and Trent Loos… 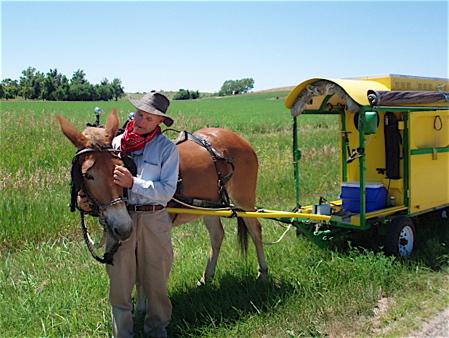 Traveling from Canada toward Mexico with my Lost Sea mule vessel, I wonder. What would it be like to switch to a 100% Equine Powered Lifestyle? I mean, here I am, traveling across the land under pure mule power. Why not expand on the equine power idea?

Recently, mule Polly and I had a chance to test the notion. While visiting Trent Loos of Hazard, Nebraska, he mentioned he needed to rake some hay with his team of Percherons. Would I be interested in throwing Polly into the hitch?

Two hours later, I was perched next to Trent in a Nebraska hay filed raking alfalfa.

Okay, so the 900-pound Polly looked sorta’ funny next to Trent’s 2,000-pound Percheron Jim. Still, the two managed to pull the twin hay rake. As we rattled up and down the hay field raking two rows of hay into one (that’s what hay rakes do) Trent explained his views on the overlap between old-fashioned and new-fashioned agriculture. 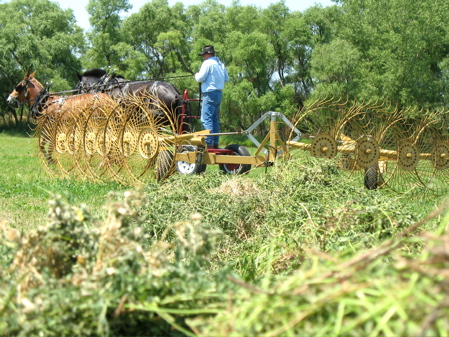 After an hour and a half of raking, of which Polly contributed half an hour in front of the rake, it became clear Polly and I weren’t ready for the 100% Equine Powered Lifestyle. She was pooped. 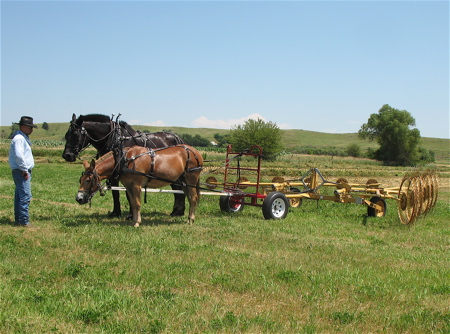 To hear Trent’s hay rake in motion, and listen to Trent’s views on mechanized agriculture, click on the player below.

So did we finish raking with horse and mule? Not quite. Of 15 acres of hay that needed raking, we raked 4. So Trent fired up the tractor and finished the job in half an hour.

Thanks Trent for throwing Polly into your hitch. For those of you interested in learning more about Trent’s informative food production pod casts, be sure to visit Faces of Agriculture…