Life and Faces in Ekalaka, Montana

Mornings in the mule wagon, I open my eyes and see this. 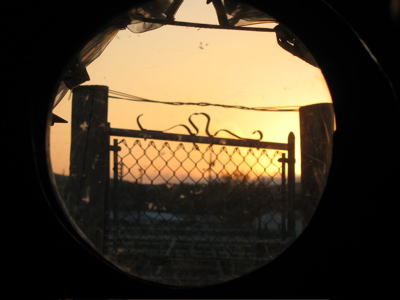 The view from my front wagon window
Ekalaka, MT

Then then there’s a bump on the door, and if it’s not fastened, I see this. 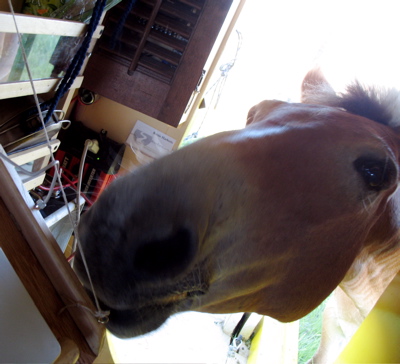 The Lost Sea Wagon’s so short and the days so hot, I don’t sleep with a blanket so when Polly nudges the door open, she has a clear shot at my exposed toes. There’s just no getting away from her so I get up, give her some oats for breakfast and go about my day in Ekalaka.

Ekalaka, MT was settled in the 1860s by a fellow who figured solving thirst, not eradicating the last buffalo, was more his style. The sign on the outskirts of town reads as such:

So that’s how the town got started.

We won’t talk about Ekalaka proper today. That’ll come later. Rather I wanted to show you some scenes from the roping arena where Polly and I are camped.

First a bit about the area.

The first big open-range cattle outfits came to south-eastern Montana, the Ekalaka area, in the early 1880s. Before that, it was considered “hostile territory”. This, after all, was Sitting Bull’s country – rather, it was the land he’d been forced to occupy. This was was Custer country. This was Little Big Horn country.

This was the country where 1400 mounted troops were sent in with the little-discussed Cole Expedition to mop up the remaining native Americans after Custer failed. They soon learned the land couldn’t support feed and water for so many horses and men so by September, when the first snows fell, they admited defeat – after dispatching just over 20 native Americans. They lost an equal number of men.

Still, ranching took hold and these days Carter County raises mainly cattle and fodder for cattle – alfalfa and warm season hay. Unlike Fallon County to the north, there’s no oil exploration in this area so Carter County and Ekalaka rely largely on ranching for their livelihood.

Like most all the small eastern Montana and western North Dakota ranching towns I’ve visited, Ekalaka has a community roping arena. It’s here that I’ve rested Polly for a week. It’s here, in the evenings, that local families, fathers, sons, daughters and wives, come to rope steers.

Here are some of the faces. 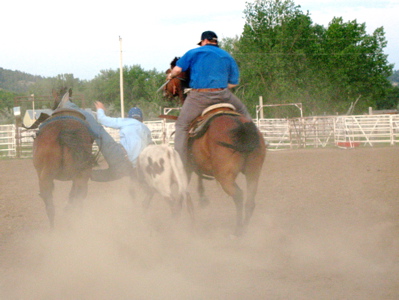 Orry Fruit just qualified for the national high school rodeo finals in team roping and bulldogging. In bulldogging, a steer is turned loose and then the dust starts.

A mounted rider (Orry, in the photo above) chases down the running steer on horseback, leans over, grabs the galloping steer’s head, then slides from his now-flat-out-galloping horse and wrestles the steer to the ground.

The hazer (Troy, in the photo above) rides on the side opposite the galloping steer to keep the steer running in a straight line.

So who turns the steer loose for the bulldogger to tackle? 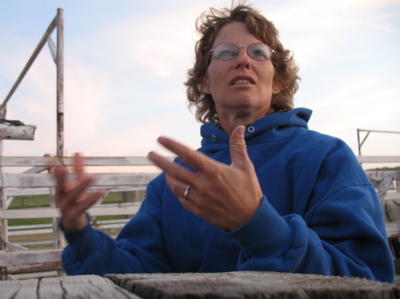 Some evenings, six or eight folks show up. Faith and Ramon Rankin, whose kids are attending camp at nearby Camp Needmore, have visited regularly during the week. 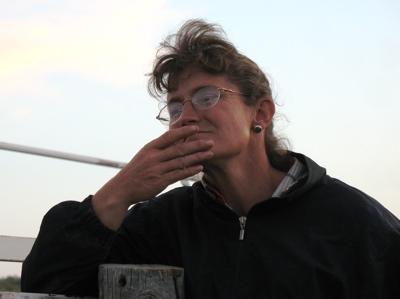 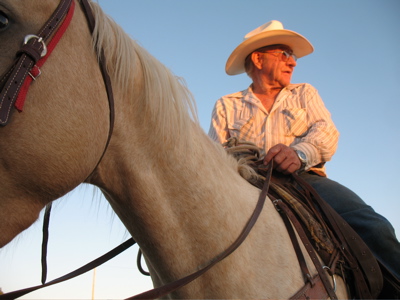 Okay, so the dust’s flying, bawling steers are trotting around the arena and voices shout, “I just ran out of arena…” So what are Polly and I doing while all this is going on?

Polly, predicatably, is eating. In fact, she’s gained so much weight on this trip I had to spread the wagon shafts so she can fit between them. 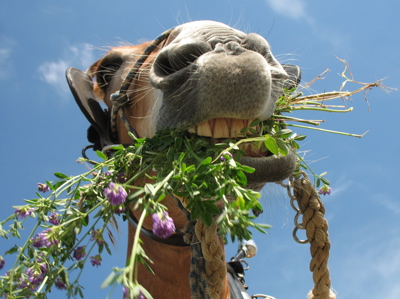 And I? Well, this weekend I gave a presentation in Ekalaka. In the evenings leading up to the event, I signed books in the roping arena grandstands 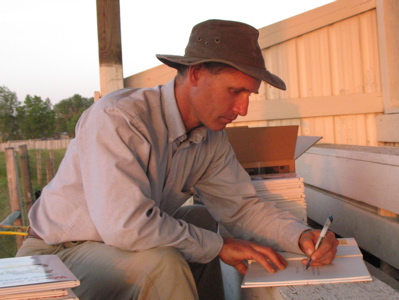 Summer’s coming, though. The crested wheat and cheat grass that Polly’s feasted on is heading out (maturing) so it’s time to move on. This week, Polly and I are heading into the badlands for Alzada, MT. This means I want Polly’s wagon as light as possible.

I normally carry fifty of my “Woody and Maggie” children’s geography books aboard the Lost Sea wagon. I sold most of them at this week’s Ekalaka appearance. Now, since I’m heading into such rough country, I want to sell the last dozen so Polly doesn’t have to lug the extra weight across 100 miles of buttes and sage. (When I get to Alzada, I’ll have more books shipped out to the wagon.) This is where you get lucky…

That’s right, for the next two days (July 2 and 3) you can get a copy of “Woody and Maggie” that actually came off the Lost Sea wagon. Your copy will even have the special “Wagon Edition” inscription (in addition to anything else you want in your book). Yep, these are the same books that have witnessed all the photos above – from the safety of their secure, ventilated lodgings. 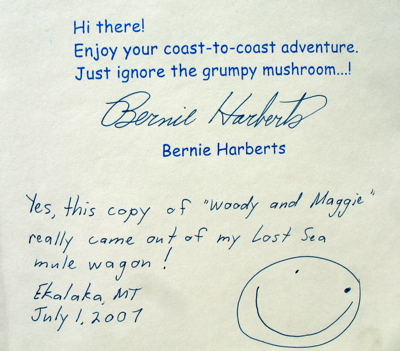 “Wagon Edition” inscription
Straight off Polly’s wagon from Ekalaka, MT to you.

Ready for that straight-off-the-wagon copy of “Woody and Maggie”? Just drop by the General Store…

One Response to Life and Faces in Ekalaka, Montana