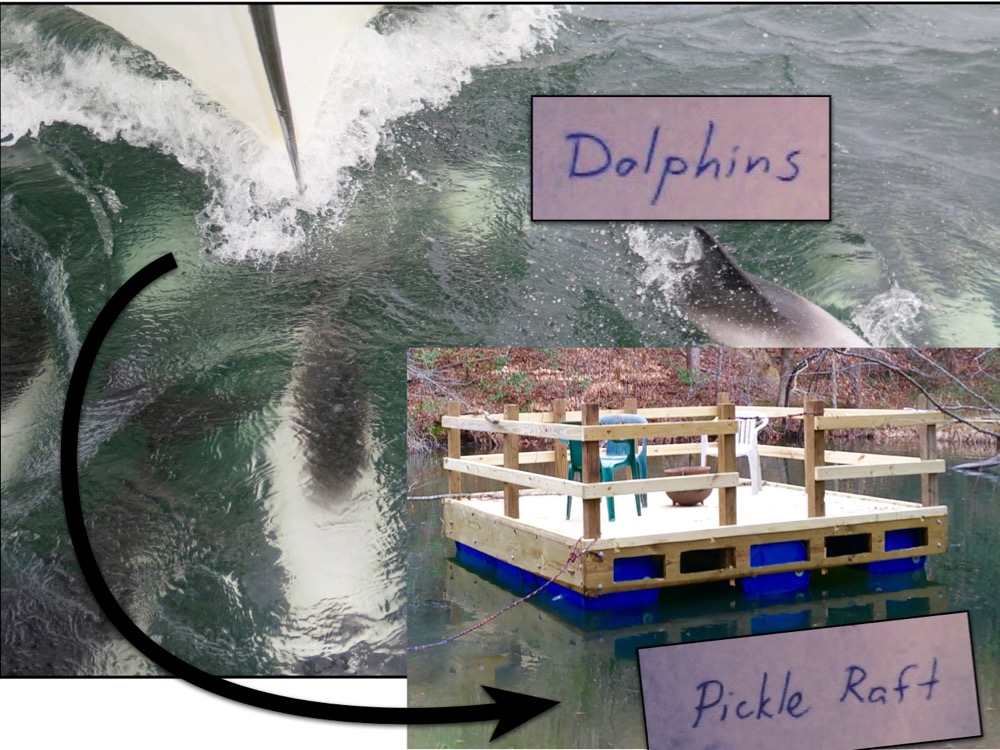 Some voyages include dolphins off the bow (Falkland Islands, Southern Ocean). Others entail pickle barrels lashed up under a deck (western North Carolina). Both are fine ways to sally forth.

Some days, a man dreams of sailing away in a schooner, dolphins dodging the striker stay. Others he’s content with a pond and a pickle barrel. It’s okay to take a break from pursuing something big to take a shot at something a bit, well, tangential.

Thing is, there’s an ebb and flow between life on the road and life at home, digesting the latest journey, pondering the next. Right now, I’m about midway through this cycle.

A year and a half ago, my friends asked me if I’d help them sail their wood ketch from the Falkland Islands to South Georgia, off Antarctica. Of course I went and lost myself in that dark nether part of the ocean world.

That was the Southern Ocean, that watery universe of glacier blue icebergs and business-suited penguins. That was the ocean so cold sailors joked the only reason to wear a bright colored life jacket was to make it easier to find the body. The ocean that could put your vessel on the rocks at the whim of a gale.

This was Shackleton’s part of the world, where all skin that could be covered was protected which is why men, including me, grew beards. 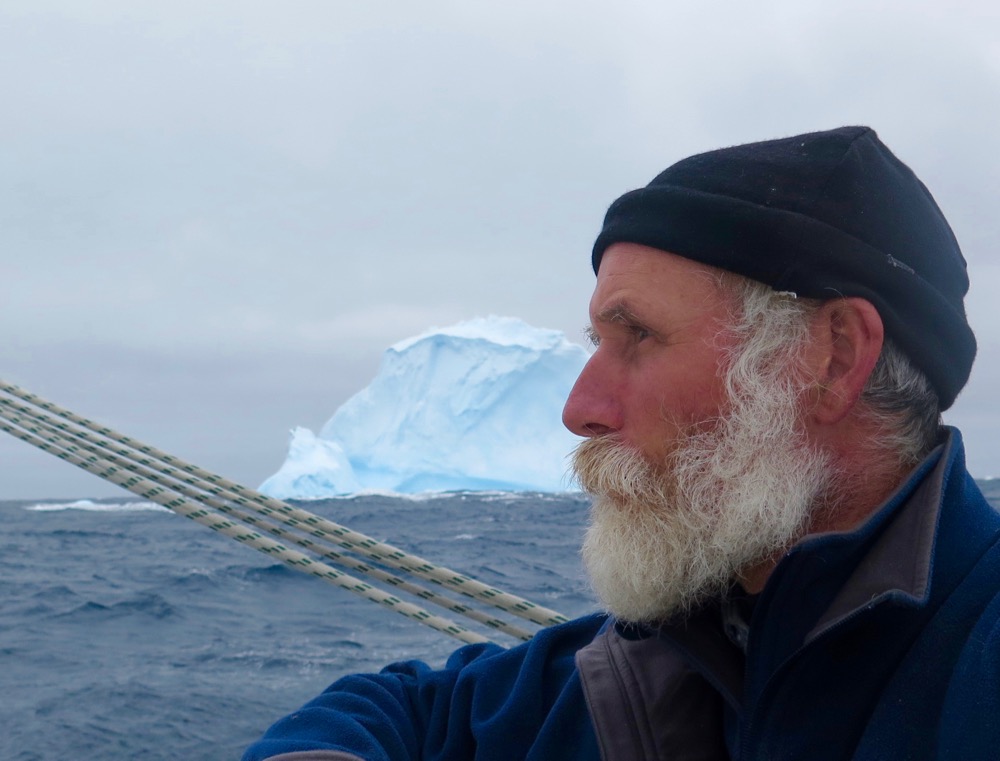 My beard offered good protection from the bitter winds blowing off Antarctica and nearby icebergs. It offered no protection from sailing in to icebergs, like the one in the background. Yes, that still happens in the Age of Autonomous Vehicles and Machine Learning. (53 degrees South, off South Georgia, Southern Ocean)

Which brings us back to now. I’m home in western North Carolina. Home on the farm more concerned about the last frost date than being sunk by an ice berg. The beard is gone. 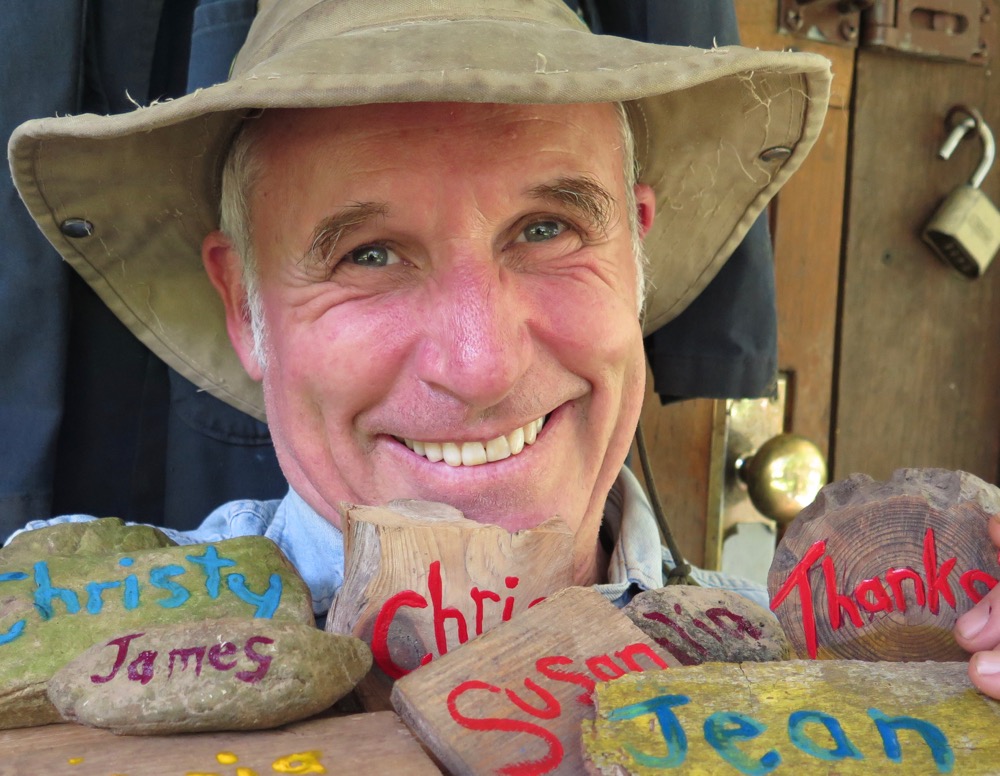 Thank you: here, I’m thanking some of the many folks that are helping underwrite the Lost Sea Expedition documentary. The 4-part series is heading toward Public Television. It’s my way of taking viewers on the road with mule Polly and me. It would be great if you could help us out!

It’s been a time of great focus. Instead of running away, the focus has been on staying home to bring one of my all-time favorite runaways to Public Television. That would be the Lost Sea Expedition , the 4-part documentary about my 14 month Canada to Mexico wagon voyage.

Currently we (Julia and I and a bunch of other folks) are working on fundraising and distribution.

Thing is, I’ve got wiggle worms in my blood. Sure, I can stand in front of my computer for hours and weeks editing film footage. But when Julia asked me one day, “hey, could we use foam to build a raft?” I said, “well, barrels would be better.”

Here are some photos of the whole caper unfolding. 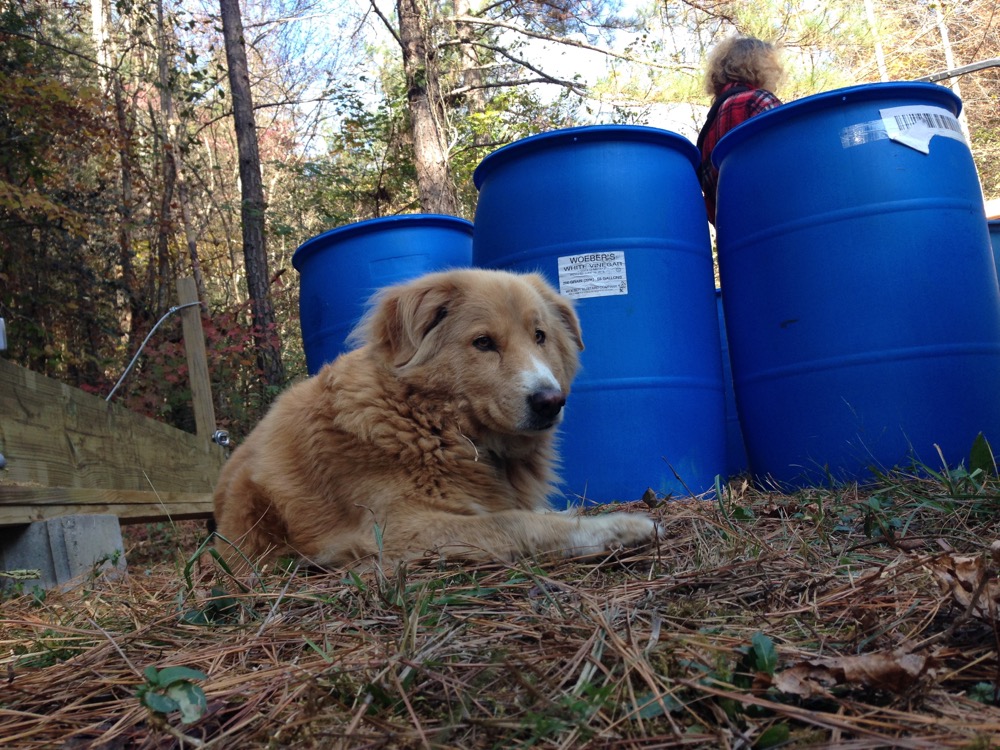 Pickle barrels: I keep calling them “pickle barrels” but they actually contained vinegar. Here, Snookie supervises as Julia and I seal each bung with silicone caulk. 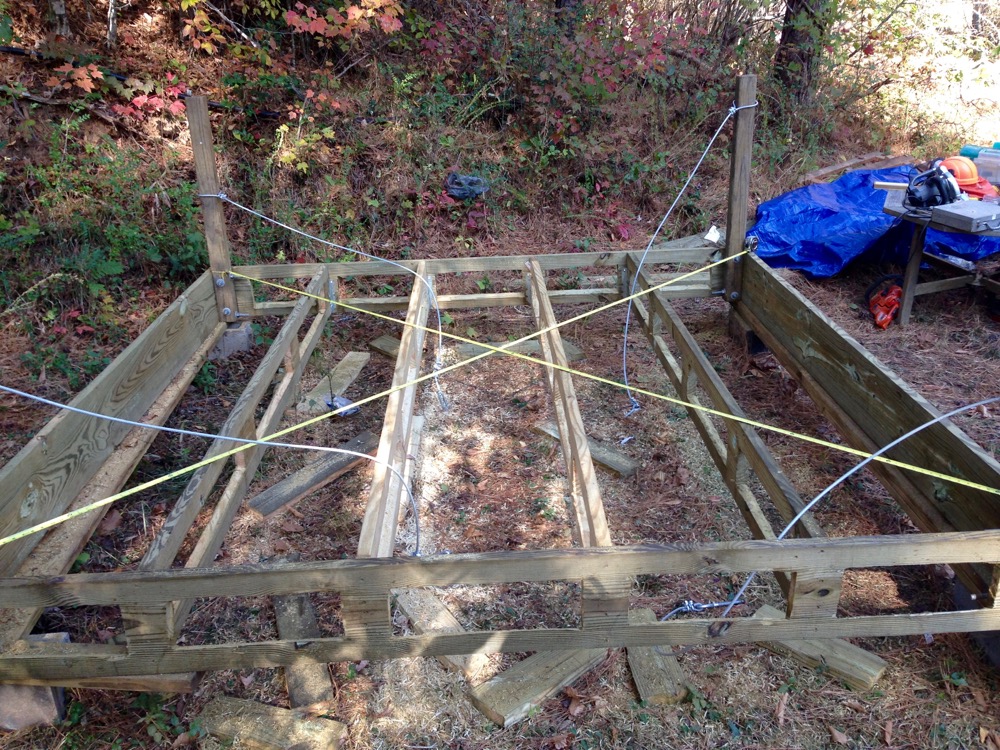 The frame is made of pressure treated wood – aka “poison pine”. Instead of using 2” x 6” boards, I built it with 2” X 10” lumber. Having just come back from the Southern Ocean, I guess I was still worried about ice bergs. I know. That’s sorta paranoid given we’re 300 miles from the ocean. I hadn’t reckoned on the extra weight this would add to the vessel. So….. I went back with a chainsaw and cut out sections of each beam. This reduced the weight without affecting the strength much. The diagonal wires attached to the corner posts keep the raft square.

My back woods construction site. No, this vessel is not Coast Guard approved. 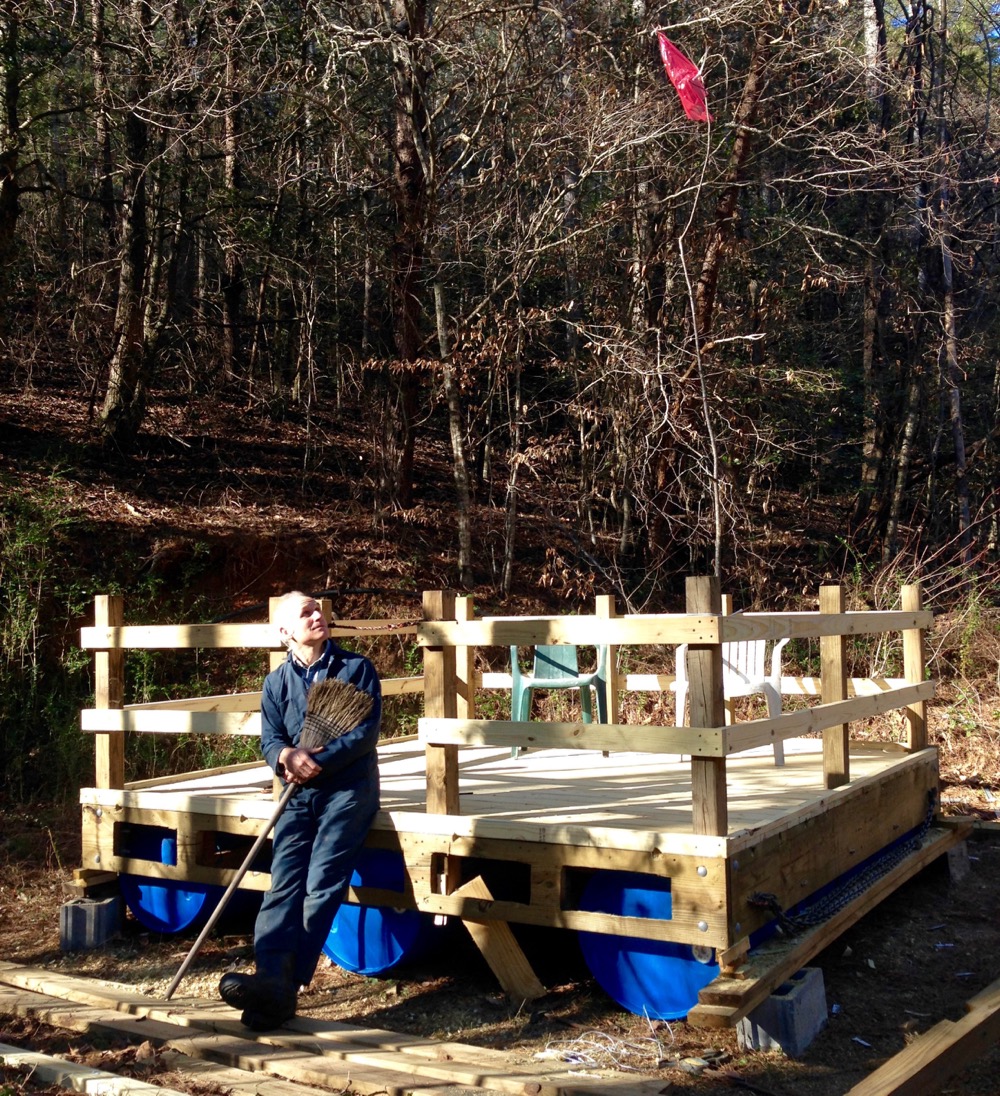 Strikin’ a pose: the raft ready for launching. Every vessel needs a flag. In this case, a piece of Danger Red plastic we tied to the end of the over-length boards we hauled home from the building supply store. 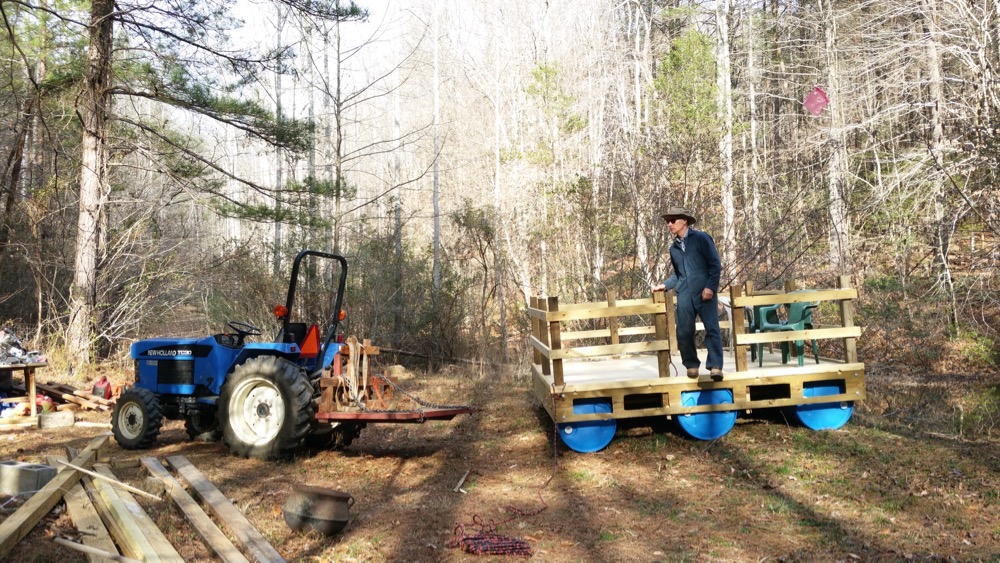 Launch: instead of using Polly the mule to push the raft in to the pond (romantic) we used the New Holland tractor (boring but effective). 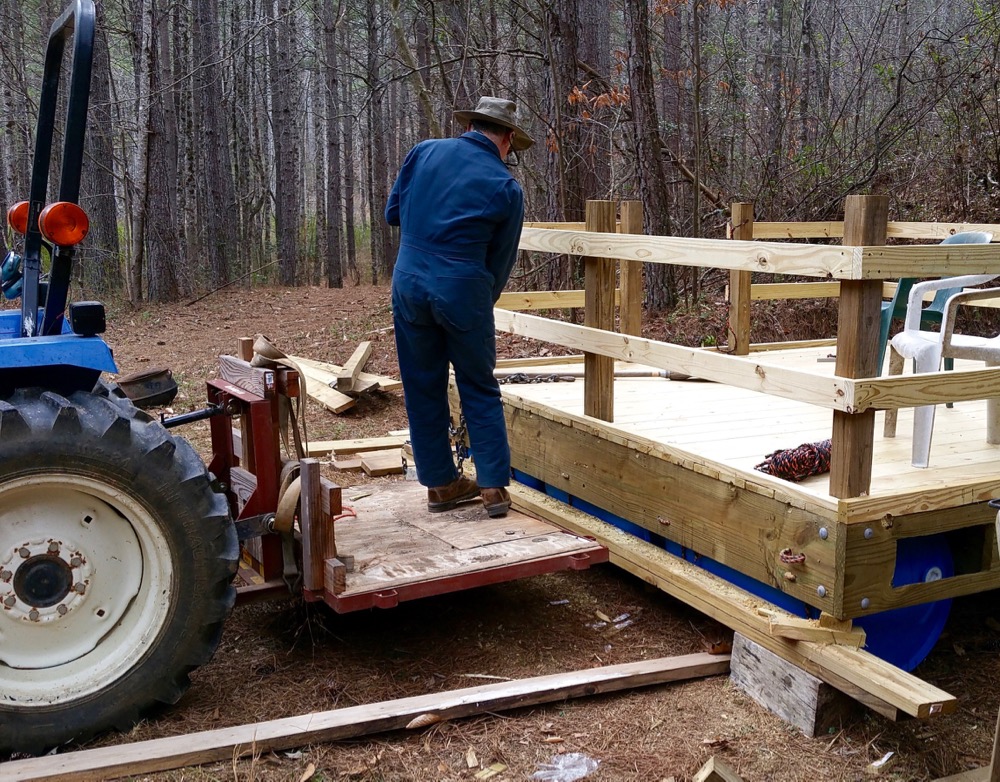 Going from land to pond critter. The rafts moments before touching the water. 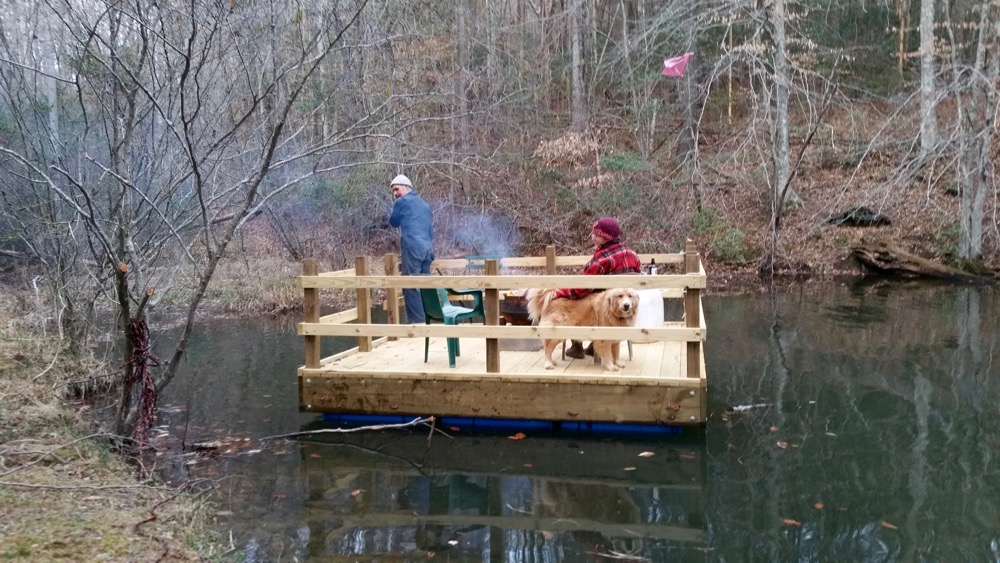 She floats! Yes, that’s wood smoke wafting up from the deck. It comes from…. 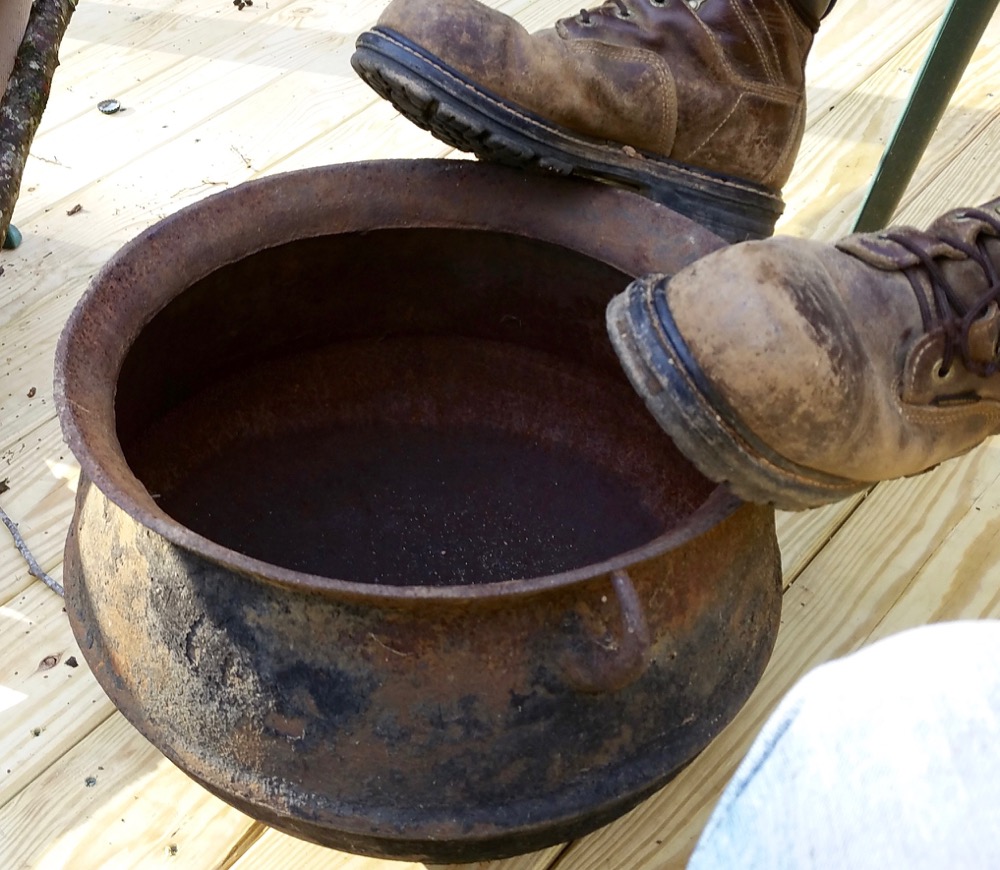 …the burn barrel every proper raft needs. In this case, I used an old cast iron pot. It came from my good buddy Kenny Tyndall – river dweller, scrap yard man and mule driver. 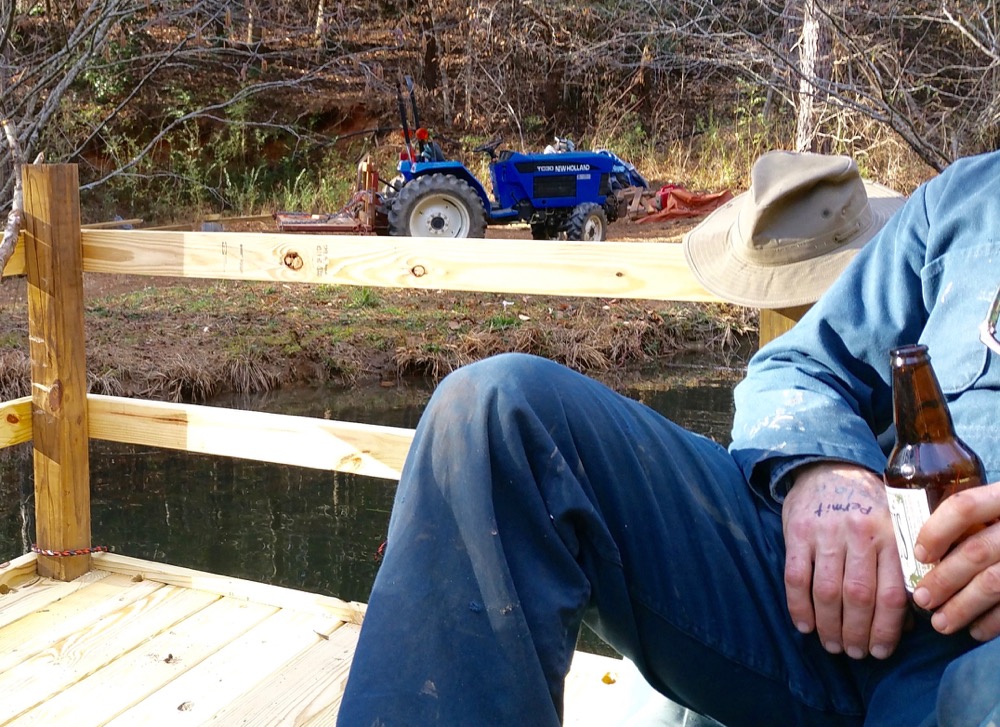 The lesson to all this? Sometimes, it’s okay to throw in a few small side projects while aiming at something big.

In the case of the Lost Sea Expedition , that voyage took 14 months. Turning that footage in to a Public Television series has taken much, much longer. In that time, my restless spirit has raised its head numerous time. Sometimes a few barrels, bolts and boards are enough to bring temporary relief. They’re enough to keep me slogging ahead with a much bigger project. 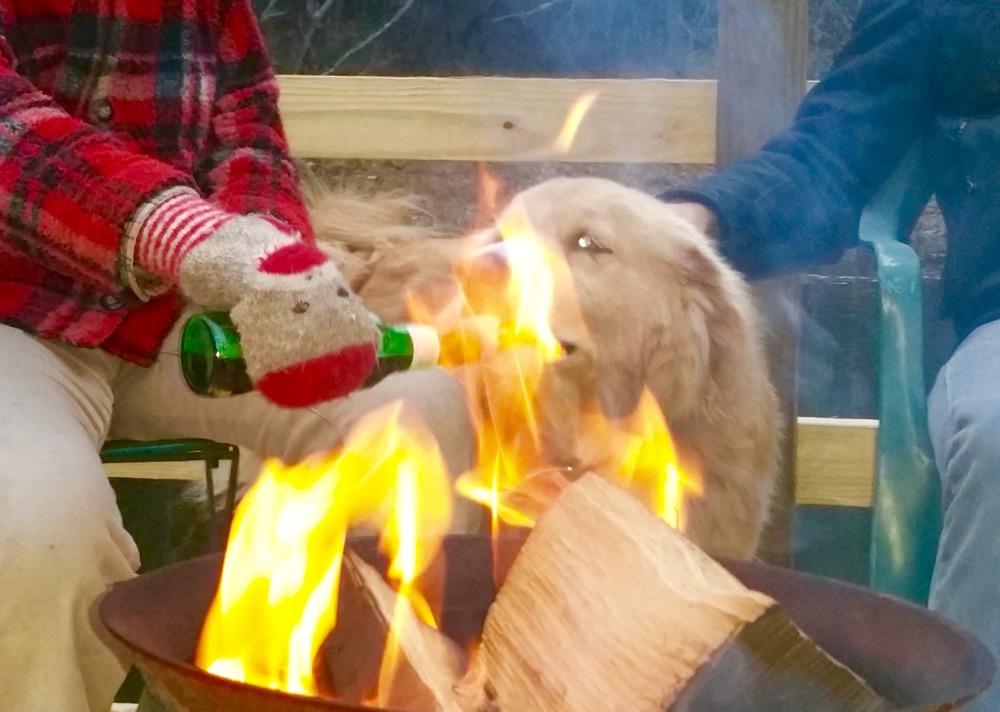 Snookie never had any doubts the raft would float. Funny how quickly he’s sliding in to the shanty boat dog lifestyle.

Of course, now Julia, Snookie, my brother Christian (who took a bunch of these photos) and I are ready to haul the Pickle Raft to the nearest river and float ‘er down to the sea. But first I have a documentary to finish.

So tell me, what does your lateral project, your personal, symbolic “pickle raft”, look like?

After a glorious season of farm pond drifting, the Pickle Raft was crushed by a red oak tree. After lying derelict for a year, it was resurrected, improved and relaunched.

Looking forward to the tv series. If ever in Newton NC, stop by for some potato soup and corn bread. Enjoy reading about your travels. My hero!

Howdy Bryson,
Hey thanks for the invite. Mule Polly and I are in Colorado at the moment but for a bowl of soup….now that might a man to come back to Carolina! Have a great day. Bernie

I still follow your posts, started a while ago. I doubt you remember me but I asked you how you managed water for Woody and Maggie. At the time I was trying to decide if I was going to make a horse trip or not, if yes how. It’s been a hard two years I was set to go in Oct but my horse Renegade became lame with an abscess so I had to put it off. New starting date July of 2018. At that time I decided I was going to use a small wagon instead of packhorse. So will be rebuilding my wagon. I’ll be looking forward to your TV series. I’ll have to wait till I can stream it. Angela

Hi Angela,
Sure I remember you! So good to hear from you. First, my apologies for not writing sooner. I’ve been crazy busy getting the Lost Sea Expedition series up and running. Still, it’s marvelous to hear you’re heading out this July. Please keep us posted and by all means reach out with any questions. We sure look forward to sharing the series with you. Then it’s time to run away again! Just remember to go smal…. Regards. Bernie

Posted in Travel by Boat