“LOVE” rose huge and pink from the airborne desert sands. Above it in red the words “GOD IS” and crowning the three worlds, like a s sabre stabbing a cake, a telephone pole cross.

I’d been in the desert four days. I was down to five pounds and four gallons of desert currency; grain and water. But this I had to investigate. 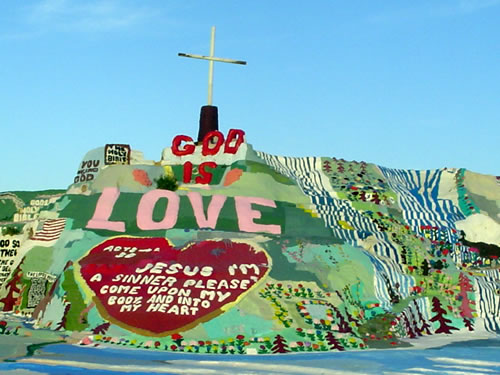 I reined Woody to the base of the mountainous explosion of wind and scripture and weeping Olympic paint cans. He stopped alongside a sky-burned couch and the Jeep Wagoneer with “SALVATION” on the door. 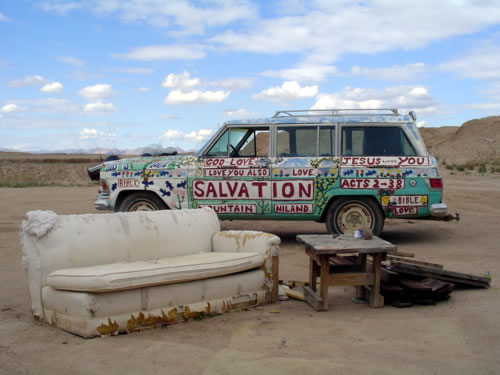 Then “Hellooooo!” from the base of the mountain and out walked Leonard Knight.

“I’d like to show you around” he said so I jumped off and tied Woody and Maggie to the Jeep’s roof rack. When the mountain speaks, you don’t look for a proper hitching post. You tie up quick and go toward the voice.

Leonard’s wispy hair blows across his sand-blasted features. We walk toward the mountain of scripture and flowers and paint rivers.

He tells me how he came here twenty years ago with grand plans to launch his balloon. Things didn’t pan out. His home made “GOD IS LOVE” balloon, the one he’d spent three years sewing up in a drafty Nebraska shed, suffered from chronic rotten seams and underinflation. It never lifted his divine message heaven-ward as planned.

So he revised his plans.

Only Leonard was broke. He was in his mid-fifties now. Stuck out here in the desert with a pile of failed balloon cloth and busted dreams.

“I was going to spend a week here and make a smaller balloon.” he tells me. “An eighty footer”.

But his plans changed and he decided to spread his message on earth.

He started small. “Somebody told me “Hey, I’ve got an old bag of cement. If you hit it with a hammer maybe you can use it”. And that’s how Leonard’s mountain got started.

The first mountain that is.

For three years, Leonard trawled the Niland dump for building materials; old paint, boards, cement. Whatever he could find to get the “God is Love” message back into the sky.

After the three years of toil the whole lot collapsed. It seems Leonard mixed too much sand with his concrete. “I was trying to save on cement so I mixed it one to six with sand”.

Then he discovered adobe and built the present “God is Love” mountain. He shows me what happened next.

We walk through an arch and into a forest of gargantuan trees.

We walk to the closest one which sports telephone pole limbs holding up straw bales at impossible angles. “This is a car tire tree. I made it with a wheel barrow and tires I found in the desert.” 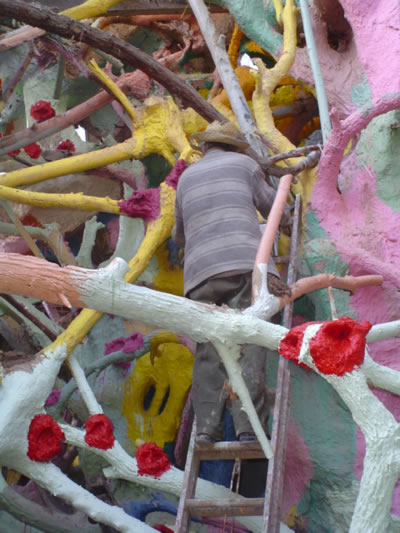 Among the branches of a car tire tree

“When I build fourteen more car tires trees and cover this area, this will be my museum”.

All I can think is “Holy smoke!”. Here’s what a man can do with twenty years and faith and God and old paint. And then I get sucked in and the words leap from my mouth. “Hey, Leonard. How can I help?”

“Do you know how to mix adobe?” he asks and I say “No.” but he doesn’t hear. “Good!” he cries and fifteen minutes later my shirt is muddy to the shoulder.

“The mountain gives me the adobe” he says as we shovel crumbly shovel fulls of grey earth into a wheel barrow. “Mix in some chunks. They add strength.”

At the end of the day, 150 pounds of grain show up for Woody and Maggie. It’s a gift from Kerry and Jacqueline, a couple I’d met earlier from Burbank. My feed problem is over.

“Right” I thought “‘reckon I’ll just sit out here with Leonard until I feed all this grain off.”

Some days we work on a salt cedar arch that we’ve towed to the site behind the Salvation Jeep. Other days we make adobe flowers. There’s nothing to it. “I just throw a half gallon of wet adobe on a branch and hit it with my fist” Leonard tells me.

Punching up an adobe flower

On the days we feel particularly burly, we haul straw bales up a spindly ladder and cement them ever-higher up the dome’s inner wall. 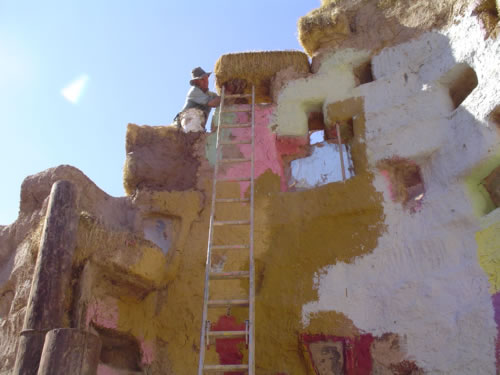 Adobeing a straw bale into place

Every morning though, before dawn, we rise and bounce the Salvation Jeep to the hot spring for a morning bath. “I want the mountain to speak for me so that one day I can step out of the way” he tells me as the mist swirls up toward the Big Dipper. “You know, in Daniel 2, God talks of the invisible hand that comes down and smashes the image with clay feet…” and we discuss what it’s like to let go and let God do the talking. 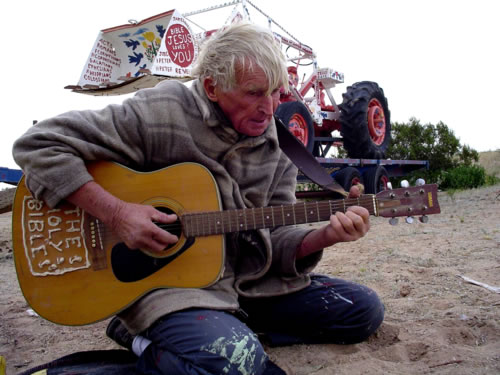 Other mornings, Leonard lets his Yamaha guitar speak. He crouches in the desert sand between my tipi and the tractor with “BIBLE, JESUS LOVES YOU” written on the bucket in window putty. He sings “My Flower Tree” while black tea boils on my sooty gasoline stove. 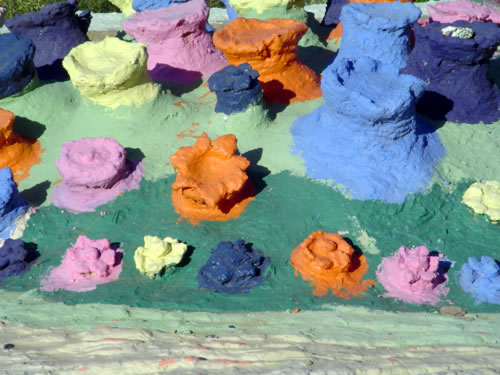 On the seventh day the grain ran out. I put my saddle back on Woody and fared Leonard well.

Thanks Leonard, for teaching me how to turn mud into flowers with a punch.