Seth and the Crayfish

Funny how things work out. I rode to Australia’s southern-most pub on my $10 dollar bike looking to drink a beer- and learned about crayfish. 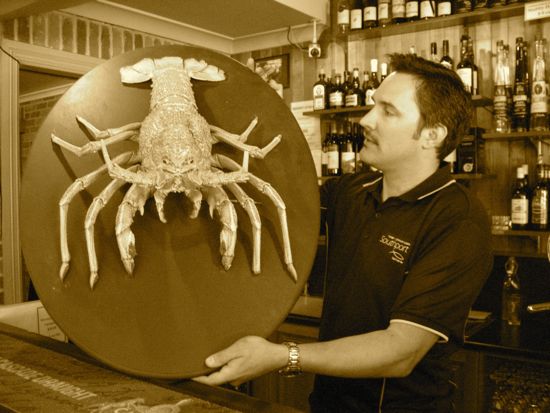 Seth and the crayfish: Seth Adams of the Southport Settlement Pub showing off a big crayfish one of his patrons caught (Southport, Tasmania)

Crayfish, or just plain “fish” as they’re called by the Tasmanian fishermen, are what, back in the states, we would call “spiny lobster”. Lacking the great claws known to Maine Lobster eaters, they make up for their pinch with taste.

A taste folks are ready to pay lots of money for.

Southport is one of the larger crayfish fishing ports in Tasmanian. As it’s close to the fishing grounds, boats leave here for fishing trips that last from a day to a month. The fast, light boats do day runs where they set and retrieve their traps in one day. The heavier, full displacement boats go out for longer. The trade off is one of speed versus hang time. Fuel is expensive so the fast boats, which burn lots of fuel, had better catch lots of lobster.

By the second beer, Seth was talking me through season limits, quotas and the Chinese crayfish market. Seems China is one of the largest crayfish importers. But that’s another story for another day.

Thanks, Seth, for taking the time to educate me on your “fish”. Heck, now I want to go out and catch one myself!

For those who want to see more of Southport’s pub and caravan park, drop by their website