Recently, on a steep descent outside Tunnel, Tasmania, the pedals on my bike, which should stop spinning when you stop pedaling, went into overdrive. Like an imp of satan had taken over the pedaling, the pedals took off at a blazing, ankle breaking speed.

Luckily I don’t have toe clips, those cage-like thing that hold your feet to the pedals. So I just lifted my boots off the cheap plastic pedals and let them thrash around until I coasted to a halt

Seems the freewheel, the part on the back wheel that lets you coast without pedaling, had failed.

Months earlier, I’d interviewed a fellow named Ludo Mineur in Hobart. Known as the Alpaca Man, he’d invited me to visit his home in Sheffield. Which happened to be only a few day’s away.

So, careful on the downhill runs, I pedaled to Ludo’s to affect repairs.

It’s something you learn early on when traveling with unreliable equipment. Make lots of friends because you never know when you’ll need to call on them. 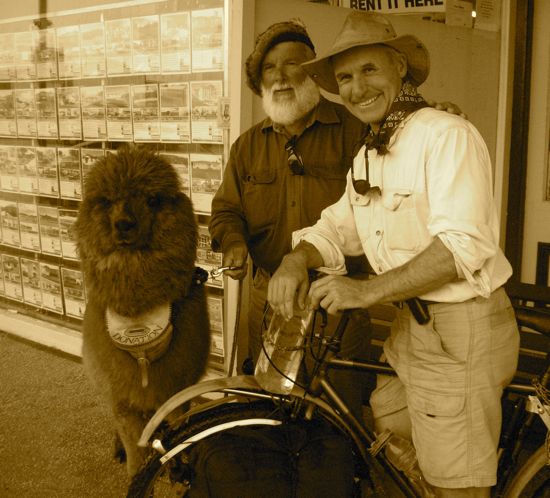 There, in Ludo’s driveway, I affected what’s become the sort of bodgy repair that’s kept my ten-dollar bike going. The type that, when they say, as they say a lot in Tasmania, “she’ll be right” you think, “well, maybe….”.

Because Sheffield doesn’t have a bike shop, I decided to repair the freewheel repair myself. When I unscrewed it, I found all the bearings gone.

This was all happening in front of Ludo’s garage door. Which just happened to be open. And in which I spotted a scrap of wire.

The wire seemed the same diameter as the b

The repair worked beautifully to the end of Ludo’s driveway – where the bearings in the rear wheel failed.