Recently, while traveling across Flinders Island on my cast off bike, I took a break next to a sign welcoming me to the Roaring Forties. After toasting the event, I whipped out my audio recorder to capture the sound the sign was making. I bottled it up in my audio recorder and today you’ll have a listen. 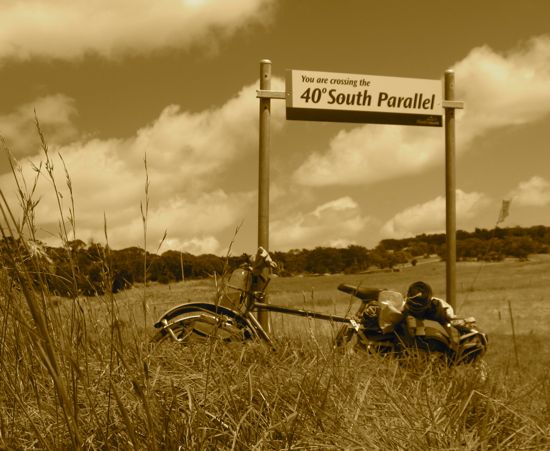 What you’ll hear is the wind blowing over two bolt holes on the Roaring Forties sign. A short distance from the sea, it welcomes passersby but mostly the wind as it blows off Bass Straits, the stretch of water that separates mainland Australia from Tasmania. 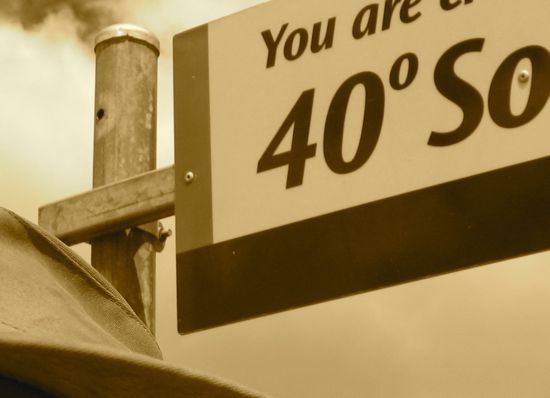 One of the two holes you’ll be hearing

As you listen to the recording, note the rhythmic rise and fall, almost breath-like cadence, of the Roaring Forties wind. It’s not in its screaming mood. It’s not in the mood that wrecked over 50 sailing vessels and steamers on Flinders Island in the past 200 years. Rather, it’s blowing about 20 knots (just over 20 miles per hour). The rise and fall in pitch corresponds to variations in wind speed. Sounds like bottles hanging in the wind….

If you listen carefully, you can hear a currawong, a black, crowlike bird, cawing in the background. Toward the end of the recording, you’ll hear grasshoppers too.

So, ready for an eerie earful of Roaring Forties?

Too cool Bernie! You could sit and listen for a while and just let your thoughts soar ….

Neat, Bernie. Not too many people would have thought of recording wind blowing through bolt holes! It was a rather soothing sound. I did hear the currawong in the background. I was not sure if the other sound was that of grasshoppers or not.
Isn’t technology wonderful?
Carolyn

It sounds so ancient doesn’t it? What made you think of recording such a thing, brilliant Bernie
luv peta