Take a Flight Over the Nebraska Sandhills with Ed Minor 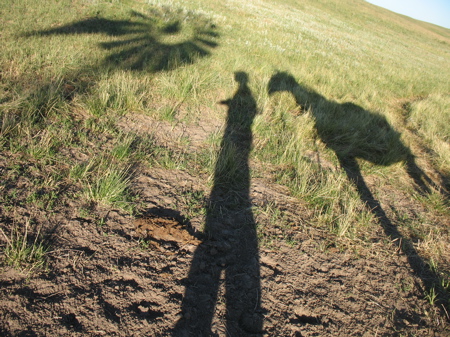 A hearty “Thanks!” to all you adventurous readers who ordered a copy of the book Too Proud to Ride a Cow as seen on the UNC-TV’s “North Carolina Bookwatch”. To let you share in the travel experience, all copies are signed.
Now let’s go flying… 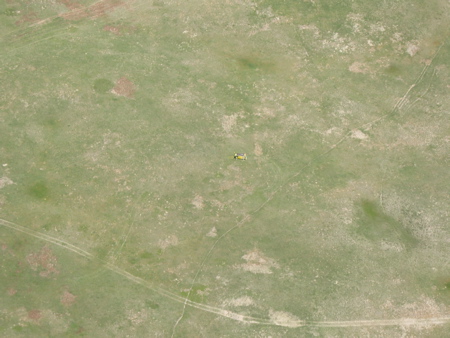 The Lost Sea as it looks today
(Note the tiny yellow rectangle in the center of the picture. That’s the roof of my traveling home, the Lost Sea mule wagon.)
Outside Merriman, NE

I spend most of my days walking beside mule Polly and the Lost Sea mule wagon looking for traces of the Western Interior Seaway, the now-vanished body of water the covered the Great Plains back in the days when dinosaurs, not cows, covered the land. 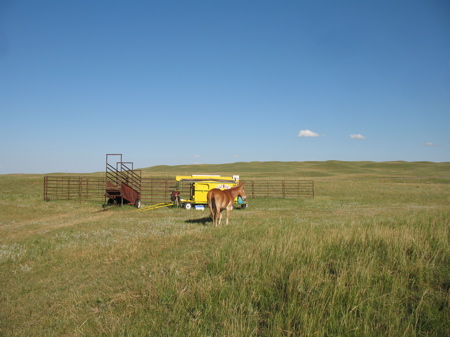 Another day in the Sand Hills
Outside Hyannis, NE

While walking is a fine way to see the country side, to really get a feeling for the land,I think a person needs to see it from the air.

But how does a guy that travels in a mule wagon get airborne?

Easy. Planes are drawn to him.

Recently, while walking through the rolling dunes that comprise the Nebraska Sand Hills, my thoughts were interrupted by a roar overhead that turned into plane that landed on a ranch road just across from mule Polly and I.

That’s how I met Ed Minor.

Seems Ed had been out checking windmills on his ranch when he spotted my yellow wagon and dropped in for a closer look. That’s right, instead of flying home to his hanger and returning in his truck, he landed his 1952 Cessna 180 on a ranch road barely wider than his plane’s wings, “just to see what the hell that yellow thing was rolling down the road”. 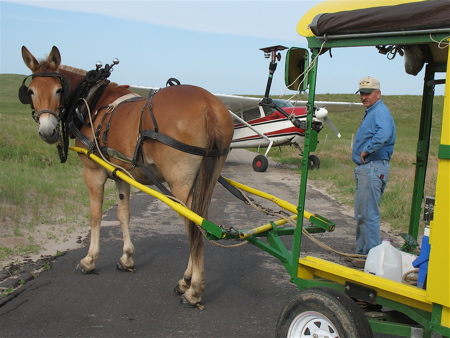 The next day, Ed took me up in his Cessna to check windmills. To listen to Ed’s plane take off, click the player below. 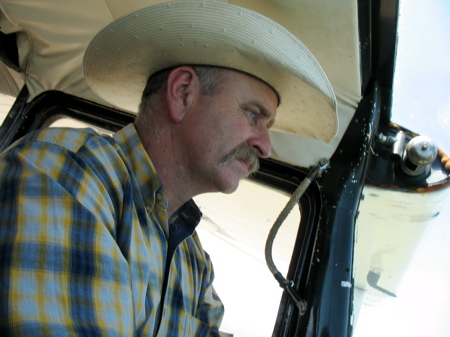 Ed Minor at the controls

As we roared above the 40,000-plus acre Minor Ranch, Ed explained why he used a plane instead of a horse, truck or mule to check windmills. The Minors have to check over 60 windmills daily. In a plane Ed can check them in “30 minutes or so” but a pickup takes “the better part of a day”. It’s important to check windmills because the cattle rely on them for water. When one stops pumping, the stock has nothing to drink.

Viewed from 4000 feet, the landscape was dominated by an arterial mesh of trails, each network of paths running to a stock tank a tireless wind mill filled. Scattered among the faint trails, tiny and randomly scattered as peppercorns, were Ed’s cows. 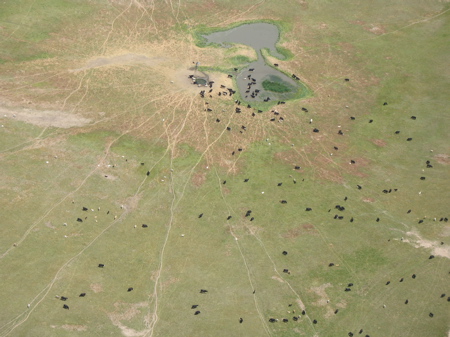 Cows around windmill at 4000 feet

Heaving on the controls, Ed put us into a spiraling dive. The mesh of trails disappeared, replaced by a spinning windmill surrounded by galloping cattle. 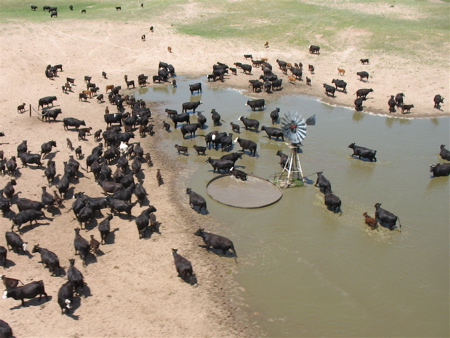 Cows around windmill at 200 feet

Look closely at the photo above and you’ll see why Ed describes his ranch as a “cow and calf operation”. Next to many of the fleeing cows (planes scare the bejebees out of cattle) is a baby calf galloping full bore to keep up.

Thanks, Ed, for showing us these grass lands from the sky.

(PS: Thanks, too, to Dick and Arlene Minor, Ed’s parents, for hosting Polly – and Roxie for cooking and telling me about Paris.
PPS: Ed. I’ve been practicing with that lariat you gave me. It might come in handy next time Polly escapes…