January 5 was my birthday and it got me looking back through my old slides. Funny how life changes. Thirteen years ago I was living in New Zealand chasing cows with Allan Crawford. These days I live on my farm in western North Carolina. I chase mules instead of cows. When I run to town, it’s for diesel, memory cards and wifi, not shark oil, scones and slide film. 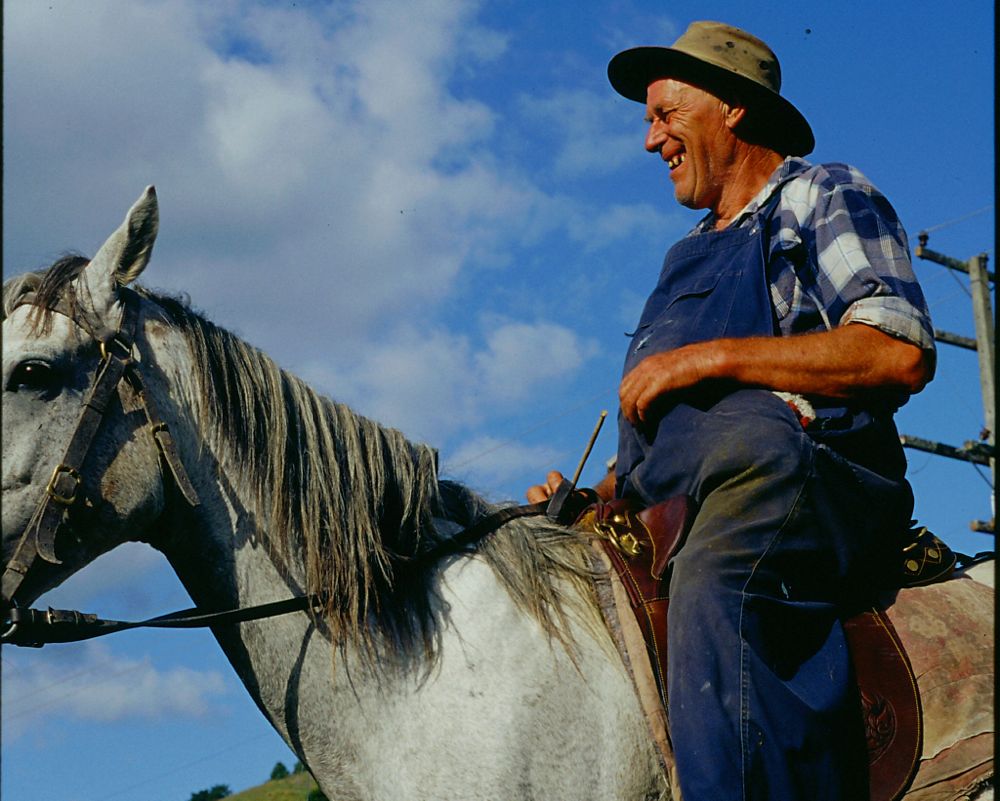 Allan Crawford: Kiwi stockman, drover and, for a spell, my boss in the land of the Long White Cloud. Allan’s specialty was moving cattle over stretches where it was cheaper to march them on the hoof then load them on to a trailer. The photo is an old scanned slide.

Slide film? Yeah, that’s the type of film you had to load in to your camera before memory cards showed up. As I looked at my old slides, they started looking pretty cool in that vintage sorta way. I thought you’d get a kick at seeing some of them.

They were all shot on the old Nikon camera I sailed around the world with. I have boxes of them (slides, not Nikons). That crusty “look”? No amigo, that’s not an app. Turns out what I saw as defects back in the day looks pretty cool now. Sorta like a dog bite scar starts looking hip a decade later. You know, something to talk about.

Here’s how those photos came about. 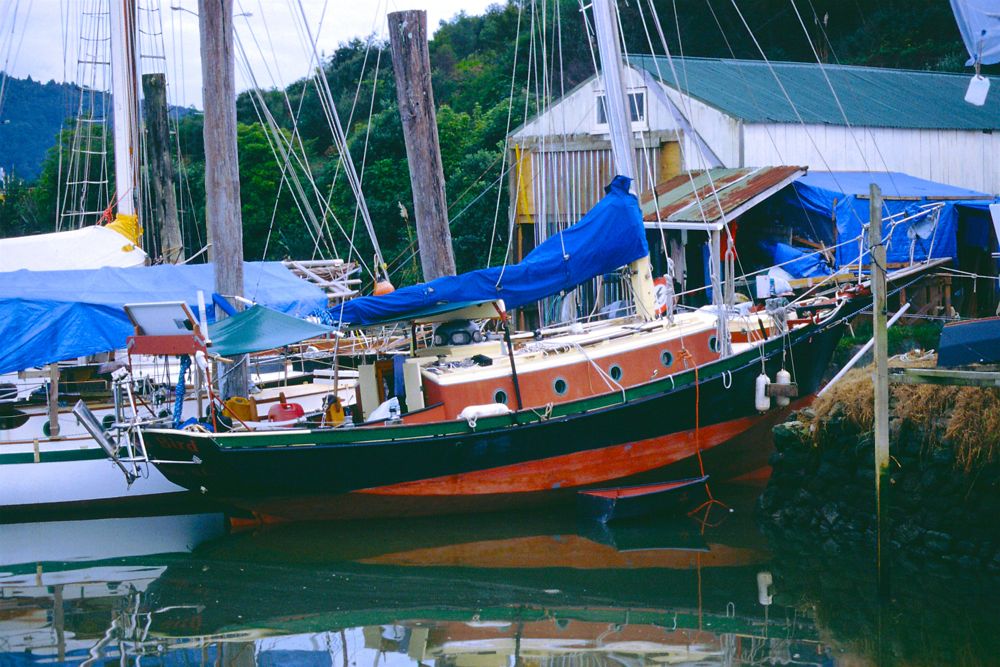 Sea Bird dries out in her Hatea River berth. It took me two years to sail the steel cutter from Oriental, North Carolina to New Zealand. I originally found her on an inland lake in North Carolina. How the hell was I to know that three years later, I’d break down half way around the globe? My pre-digital Nikon never let me down. I snapped this photo from a rowboat. (Whangarei, NZ)

I’d sailed my sailboat Sea Bird half way around the world only to break down in a foreign land– New Zealand. There, I struck up a friendship with a Northland stockman, Allan Crawford. He and his family took me in and put me to work weekends droving cattle. I was supplied with a horse and a sandwich. I brought my old Nikon. The deal was I could ride along and take photos as long as I helped gather up and drive the cattle.

Monday to Friday, I painted, welded and sewed like crazy on Sea Bird. The rest of the week I went bush. 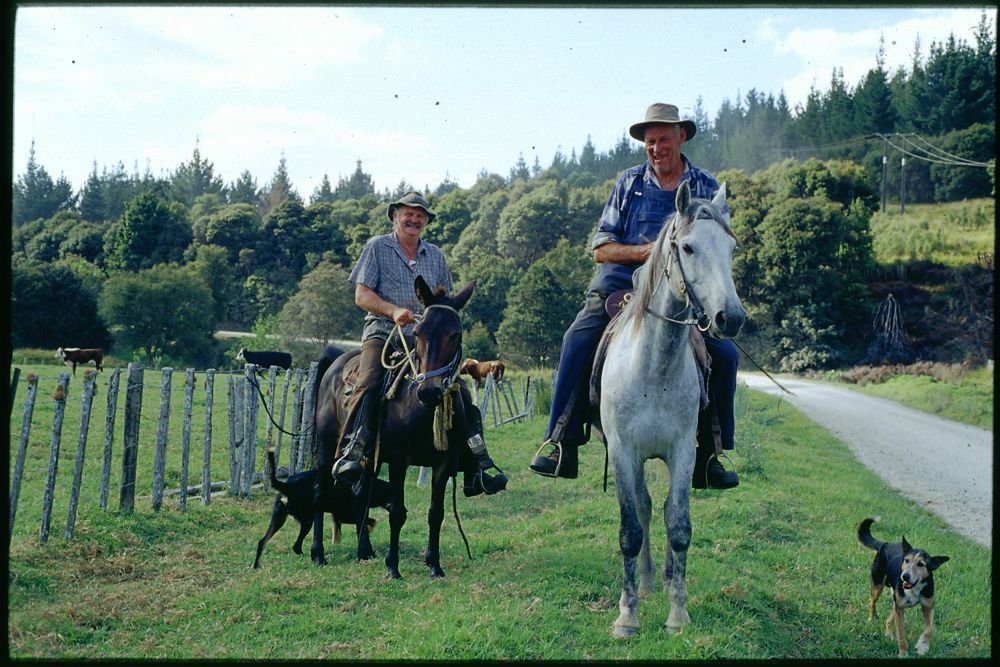 Allan Crawford astride Rangi prepares to muster cattle with his buddy Rodney Craig. Rodney is riding one of the only mules I came across in New Zealand. His name was The Colonel. Rodney hauled him around in the back of his work truck. The truck had metal sides. The Colonel just jumped in to the back of the bed and off they went. Damndest trick. I’d love to try it with Polly, my mule, and my 1992 Dodge.

My job was to help Allan move cattle from winter quarters to summer grazing and back. In his part of New Zealand, at that time, the cattle still ran free in the bush. After rounding them up, we walked them up the road. The cattle had the right of way. When a car showed up, it slowed and the cattle flowed around it. The brown critters were docile and just shambled along. The dark ones, the black angus, where flighty and ran like hell. They were a pain in the ass to keep up with but since I was the free help, Allan didn’t get too mad if I let one or two break free. 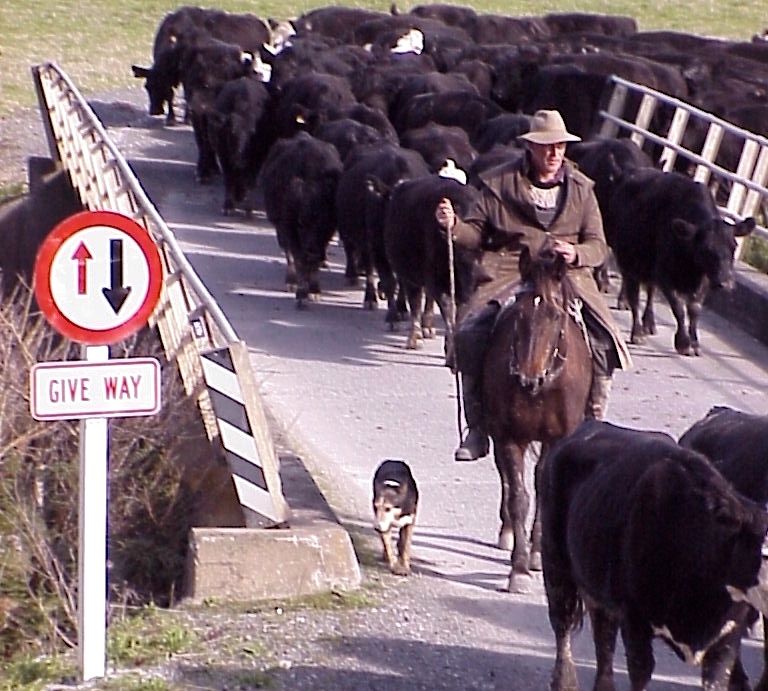 Give way: alone guides a mob of cattle across a narrow bridge. Unlike American cowboys, Kiwi drovers don’t use a lariat or a lasso. Instead, they rely heavily on dogs and sticks. Carrying a stick all day gets heavy. You can see Allan resting this tip of his on his gum boot. This photo was an early digital photo. It was taken with an ancient (circa 1999) Mavica digital camera. It still looks pretty cool. 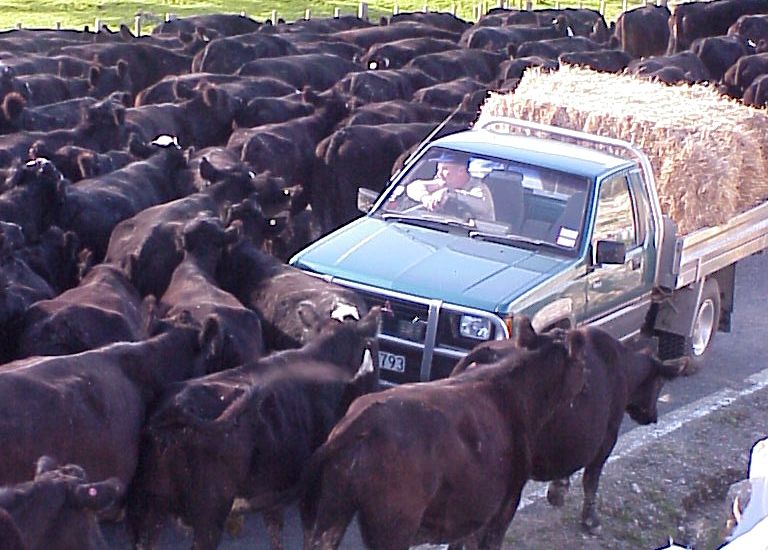 Okay, I had to slip in another vintage digital pic. Just to show you how close those cattle would crowd the occasional passing vehicle. I especially like the cow standing cross-wise to the front bumper. I never saw one make contact. I saw plenty stop to munch hay out of the back of a passing pickup. 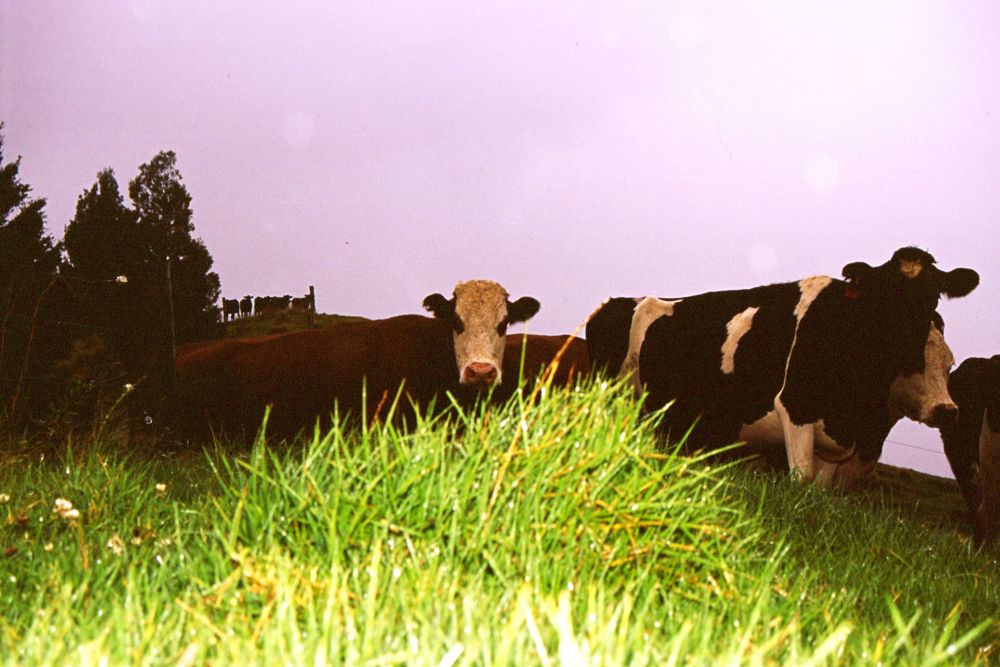 Some wet cattle. It seemed to rain most of the time I droved. Standard attire was a raincoat and gumboots. The boots were giant so we rode with with wide stirrups. If we got thrown, we wouldn’t get trapped by the irons.

Allan and I put in lots of saddle miles that year and a half. We moved hundreds of cows and I put lots of shark oil on my butt when it got sore. Allan never got saddle sore. I never crashed a beast into a Kiwi’s quarter panel.

I eventually repaired Sea Bird and sailed her the rest of the way around the world.

(Postscript: Allan and his wife Gwyneth still live in New Zealand. I chatted with him per phone a while back.)

Great fun, the pictures and story.

Happy belated Birthday. Thanks for sharing some of the memories of your travels.

Have a great year. Hope to hear more from you in future blogs as the year progresses.