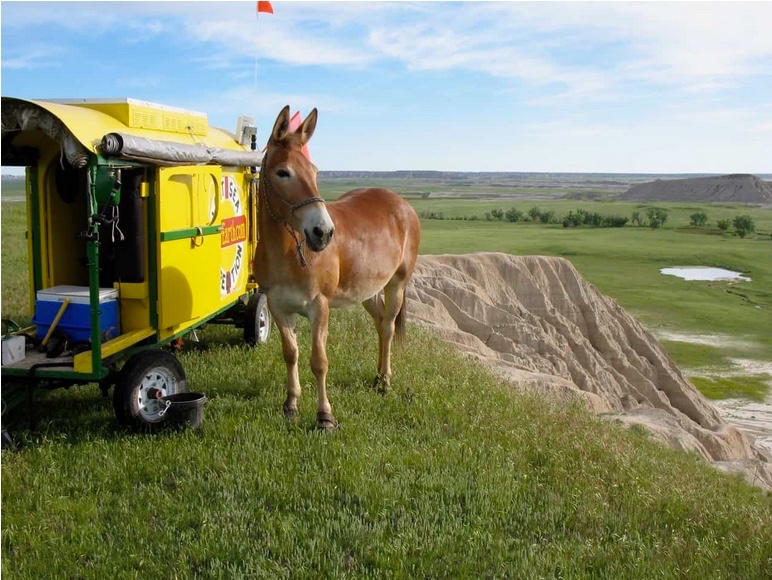 Polly’s owner planned ahead to keep her healthy and happy over their 2,500-mile, 14-month journey from Canadian to Mexican borders. / Photo: Courtesy Bernie Harberts

And then, there are those like Polly the mule.

Polly went on an extraordinarily long adventure. She recently covered 2,500 miles, from Canada to the Mexican border, over 14 months, all the while pulling her owner, Bernie Harberts, in a covered wagon. With careful planning and daily attention to her needs, the former eventer and steeplechase jockey kept the 14.2-hand draft mule in top form from start to finish.

“My experience is that the default state for a horse or mule is health,” said Harberts, who previously traveled 3,500 miles from North Carolina to California with another mule, that time under saddle, and a pack pony. “Maintaining that default state, whether at home or on the road, requires exercise, modest food (but not excessively rich food), clean water, good hoof care, and a general attention to their overall health and welfare. Do that, and those animals are going to be healthy.”

Polly certainly got plenty of exercise. She pulled the cart eight to 10 hours a day, with a break of at least an hour in the middle. “Those are long days in the harness,” Harberts said. “But the trick to keeping weight on while traveling is going slowly. Polly never lost body condition.”

Harberts made sure Polly could always graze along the side of the road during her breaks. In the evenings, he’d usually ask locals if they had a “patch of land” for her for the night—and he never had problems getting a positive response.

Harberts traveled with 10 to 15 gallons of water on his wagon for Polly. “But we rarely needed that,” he said. “Most of the time people would tell us, ‘Oh hey there’s a running river about 10 miles down,’ or direct us to a windmill with water. So she got to get a good supply of fresh, clean water, as well.”

Keeping hooves healthy across miles of mostly asphalt roads might seem like a daunting task. But Harberts said a little advance planning and common sense gave them problem-free hooves for the whole journey. First and foremost, he selected an animal with naturally strong hooves. “She’s big-boned and stocky, and her hooves are solid,” he said.

Still, that much road time is going to cause excessive hoof-wear. Harberts said he opted out of iron shoes because nails can loosen and shoes can come off. And traveling solo and trying to keep his wagon lightweight, he didn’t want to be his own blacksmith.

“She developed tough callouses on her toes, so her feet adapted to the environment,” he said. “And the other thing that happened is the hoof got stimulated. I swear it grew a little faster. That allowed the hoof to be shaped more like a natural hoof, like a mustang, which led to stronger hoof structure and better weight-bearing.” 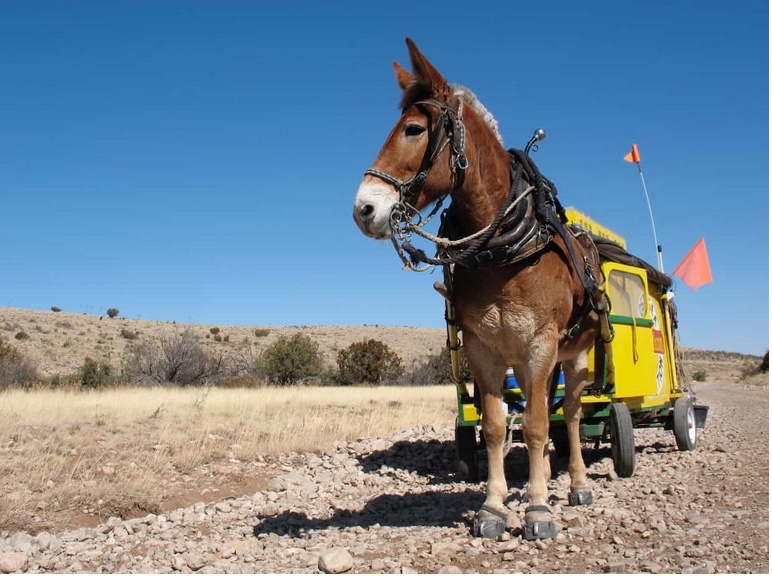 Harberts found that keeping Polly barefoot and using hoof boots, mostly on the front hooves, kept her hooves in good condition as they passed over varying terrain and footing. / Photo: Courtesy Bernie Harberts

Harberts found that keeping Polly barefoot and using hoof boots, mostly on the front hooves, kept her hooves in good condition as they passed over varying terrain and footing. / Photo: Courtesy Bernie Harberts

Although she rarely needed trimming, Polly benefited from Harberts’ natural hoof care skills he learned before the trip. “You can’t just embark on a big trip like that with no hoof skills,” he said. “It’s important to get training and get the tools to learn how to do it yourself, because a lot of the time, you’re on your own.”

Harberts walked beside Polly for about half the journey. This served several purposes: reducing the weight of her load, giving her company, and letting Harberts evaluate her and get a “feel” for how she’s doing.

“You spend that much time walking alone next to an animal, you get to know that animal pretty well,” he said. “So it was pretty easy to tell when something was wrong or what her moods were or when she was just getting tired and ready for a break.”

He says having that insight is critical when it comes to keeping the animal’s motivation up. “It has to be your idea to stop, so they don’t just start quitting on you,” he said. “As soon as you feel them getting tired, let them rest. That way you never get a balky animal.”

While the trip was mainly problem-free, they did run into a few issues, Harberts said. Polly once spooked and tried to jump a fence, ending up with the fence separating her from the wagon. That led to a few scratches requiring basic antiseptic care from his first-aid kit.

They also encountered lots of flying insects on their journey. While Harberts had trained Polly to accept getting sprayed with insect repellant, he said none of the products he tried worked for more than half an hour. “It helped that she was a mule,” he added. “They seem to resist insects a little better.”

As they were going through South Dakota, though, they ran into what the locals called a “nose fly.” The insect would fly up Polly’s nostril and sting high up inside the nose. “She’d go blind racing up the road in a fury,” he said. “The people there told me those flies are known to drive horses crazy, sending them in a rage through crowds and barns.”

Locals shared with him their only-known deterrent against those nose flies: dangling strips of fabric down from the noseband over the nasal passages.

Perhaps the biggest challenge, though, was preventing skin lesions from tack. “Chafing is a huge issue with horses traveling long distance,” Harberts said. “Sheer friction will wear a hole in them.” 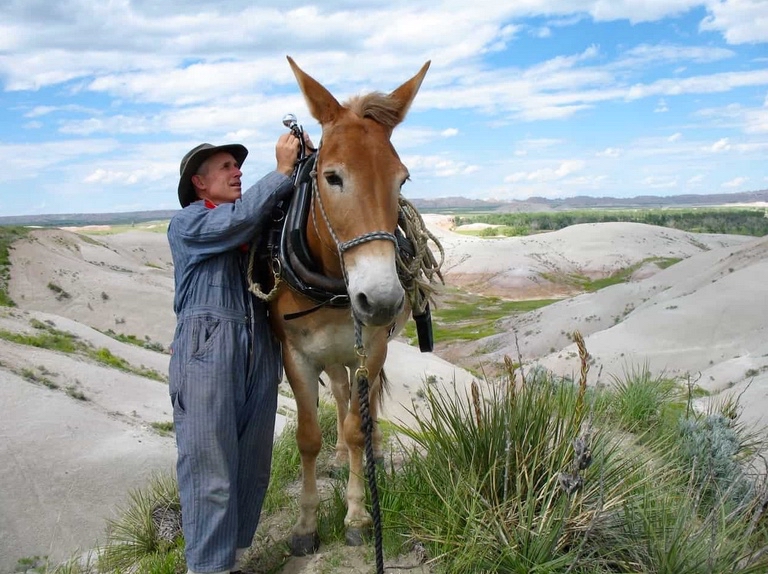 Poorly fitting tack won’t always cause obvious problems in nontraveling horses, especially if the fit issue is minor, he said. But constant use over weeks and months can cause serious problems. Even well-fitting tack will eventually lead to sores over long journeys. “It’s like if you rub a piece of paper against the back of your hand for five minutes,” Harberts said. “That’s nothing. But if you do it for eight hours straight, you’ll get pretty sore.”

For Polly, the rubbing came from the tugs, which connect the harness to the wagon.

“Those tugs touched her flanks, rubbing back and forth, as she walked,” Harberts said. His solution? A silicone spray designed to give show horses a shiny coat. That, plus wrapping the tug in clear vinyl plastic wrap, kept the chafing at bay.

He also used the spray on her shoulders and applied a special foam padding to the collar, which prevented collar sores throughout the trip, he added.

Of course, such a long trip requires physical preparation for the animal, Harberts said. He trained Polly for the two months leading prior by having her pull what he called a “stone boat”—like a wooden sled—to increase her fitness level. And he got a veterinarian to approve Polly’s health status for the journey before heading out.

Harberts put great care and consideration into Polly’s health and well-being for their long journey. But he credits the generosity and kindness of the people he met along the way. His goal was to interview the people of the Great Plains about a prehistoric sea that once covered the area, as part of his “Lost Sea Expedition,” which aired as a public television documentary series. But, in the end, it “just turned into a much deeper picture of America,” he said.

“These people were ranchers and farmers,” Harberts continued. “They’re not going to show up as B&Bs on your smartphone. We made ourselves vulnerable, traveling the ‘flesh and blood way,’ and we found that the Americans of the Great Plains were so open and welcoming to that. And really, that is the reason Polly stayed so healthy. It’s because people helped us.”

Planning is important, he said. But so is having an open mind to discovery and sharing culture with others, united in a common appreciation for taking care of animals. “We were humble and grateful, and somehow that brings out the best in people,” he said. “I wouldn’t have done it any other way.”