Gentle readers. I have deceived you. Okay, “deceive” is a mite hard. Let’s say I haven’t been completely forthright about mule Polly and my mission here in Newfoundland. While it may seem we’ve been stumbling aimlessly around The Rock, we’ve actually been on a record quest. Record as in vinyl, not world. 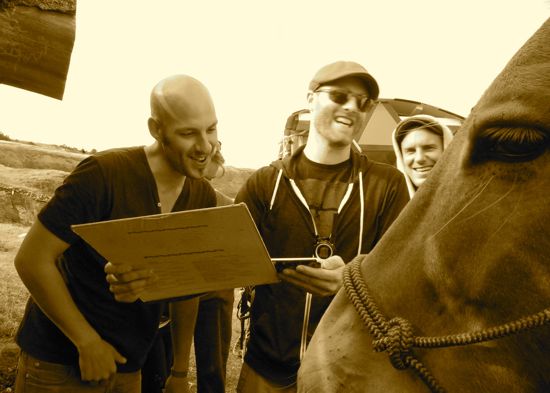 The object of my mission: find the photos on this album. Here, Matt Tucker and his film crew take a look at my vinyl. They appear amused. Mule Polly less so. (Mablerly, Newfoundland).

For the post few months, I’ve been writing occasionally about what Polly and I have encountered on our trek across Newfoundland. Herring, caplin, molasses bread, icebergs, moonshine and crusty fishermen.

But that’s just the side show of what we’ve been looking for. Call it the by-catch if you want to get all fisherman about it.

For reasons of adventure, I won’t get into the details of the record too much. Like give out the title. Don’t want folks to search engine the album to death and email me longitude and latitude co-ordinates of the pics I’m questing. No need to go on a mule mission then, right?

I will say I bought if for a dollar in a small southern town. The four photos on the cover of the album are all Newfoundland scenes. They date from at least the late 1970s. Could be much older. Yes, I know things look differently now. They are:
Picture one: A rock with a wave crashing on it
Picture two: A harbor side fishing village in front of a hill
Picture three: A Newfoundland house with a guy out front cutting hay
Picture four: A boat ramp

I carry the album around with me in the wagon. Most days, I pull it from its secret location between the whiskey bottle and the toilet paper. Just to show it to someone. Ask them, “hey, do any of these photos look familiar”. Most days, folks say, “Boy (they pronounce it “bye” in Newfoundland), that could be anywhere.” Then they go back to fishing, farming, truck driving, flossing, eating breakfast, drinking tea, harvesting icebergs or looking for whales. 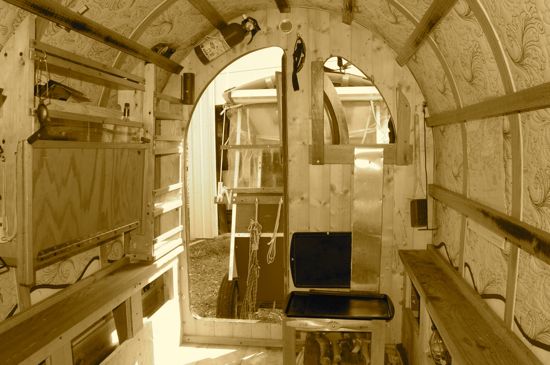 Inside Polly’s wagon. The interior is removable. In this photo, the furnishings, including the wood stove, have been taken out for fall cleaning. The album resides behind the shelf running along the right side.

But ask folks the same question for a quarter year and sooner or later someone is bound to say, “Bye, that’s down by where the dog used to lie in the road over Trinity way…”.

Here, in an excerpt from a letter I wrote a friend recently, is how the hunt’s going…..

“So I hear from this gruff fisherman that photo number three is in Trinity. Sure thing. He says, “That house is by the spot in the road where the dog used to sleep.  Only he’s dead now so you’ll have to ask around a bit. They’ll be able to tell you down there where he use to nap. Not sure how he died but he’s gone.”

Great. This guy’s got huge hands. Almost broke my howdy hand when he shook it. Surely he’s pulled enough nets in his life to know where such-and-such a house is. And besides, no one else has a clue so I might as well give it a shot. So Polly and I head toward Trinity.

Three weeks later, in Keels, I run across two pretty girls. Be about thirty. I mean real pretty. And they look at photo three and giggle in french accents (they were from Quebec) “we know exactament where this house is. It’s in Trinity!“

Brilliant. I’ve got picture three nailed. Sorta the Pretty Girl, Gruff Fisherman Telemetry Thing. All I have to do is get Polly there and we’re golden.

Flash forward half a month of wagon travel. I’m heading into Trinity. I’m at the bend in the road where the girls and fisherman say the house will magically appear. I pull out my camera. House in picture three is coming up. I hear the wind chimes. Sorta like when you go to heaven and you’ve donated lots to the church. You played your cards right, sly dog you. The sound of the car crash recedes. The tinkling fades in….

Then I see the roof. But damn it there’s a chimney where there’s not supposed to be one and there’s a forest where, in photo three, there’s a cliff. And there’s no man out front cutting hay with a scythe by the driveway. No, the driveway is way too short and it’s blocked off by a No Trespassing sign.

Aw hell…. The house I trekked out to wasn’t even close to the one in photo three.

I haven’t shown my album to any pretty girls or strong fishermen this week. I did give a young boy in Trinity a ride in Polly’s cart.

So that, folks, is what Polly and I have really been up to this summer. The rest, as they say, is just the story.

I hope I’m forgiven. Good luck on whatever your questing.

Here are some scenes from our search. Most are from the Bonavista Peninsula on Newfoundland’s East Coast. Thanks to Eric, Karen and Benjamin at the Maidment House Bed & Breakfast in Trinity, Newfoundland for some great meals, wifi and the tin of tea! 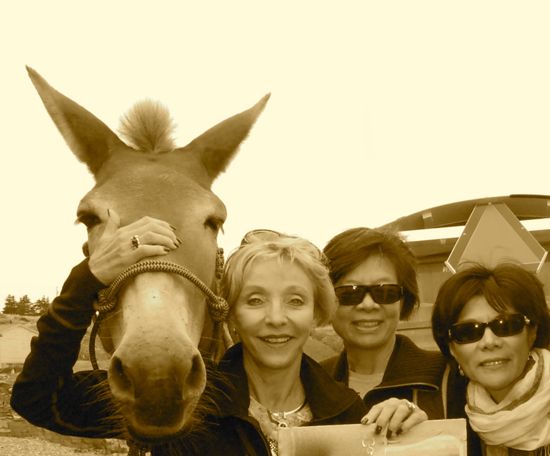 Four beautiful ladies: the three ladies on the right provided some great leads for where my photos might be found. The lady on the left – mule Polly – is less amused. She’s the one that has to tow my wagon on this lark. (Maberly, Newfoundland) 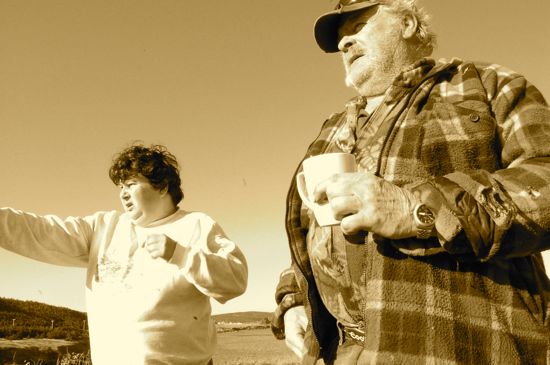 Diane and Will of Birchy Cove pitched in on the search. No clue on where to find any photos but they brought us some beautiful eggs. Thanks guys! 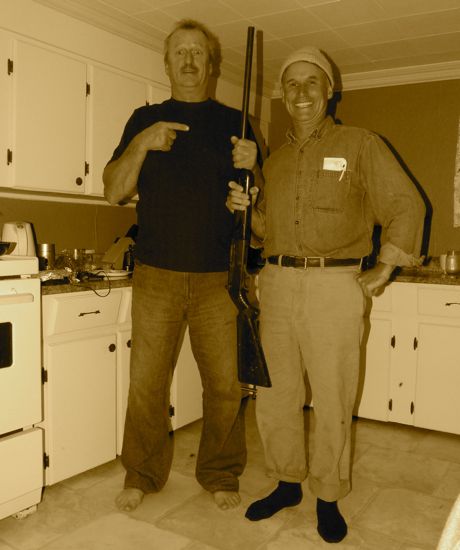 We found guns, too. Here’s a doozy unearthed in my record quest. 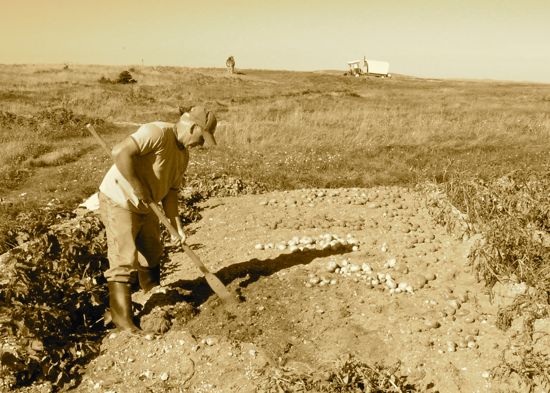 Of course you can’t seek high and low in Newfoundland without involving potatoes. Here, Reg Durdle of Birchy Cove digs his spuds. He stores them in a root cellar. Thanks for the samples Reg! 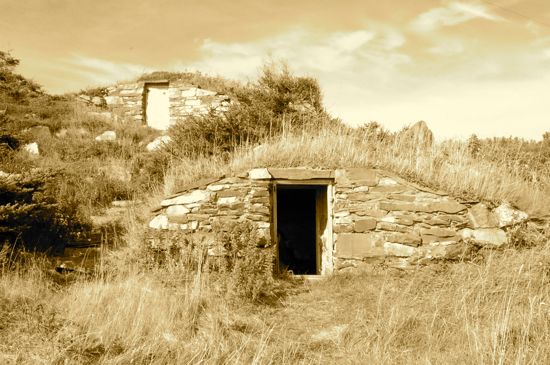 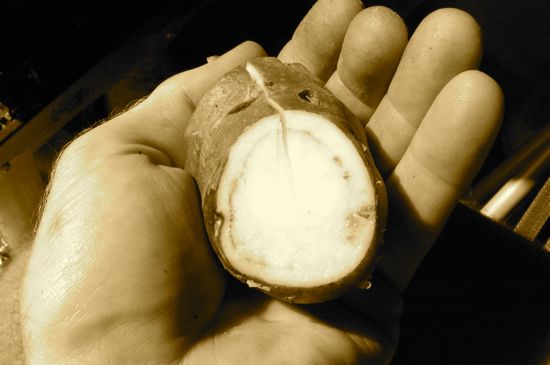 Here’s one of Reg’s potatoes. It’s a Newfie Blue. Named after its color, it has a distinctive purple-blue band a quarter inch inside the peel. Cook this potato and it turns creme colored. This one went down a treat with a feed of fresh cod, dandelion and a shot of 12 year whiskey. Hoozah! 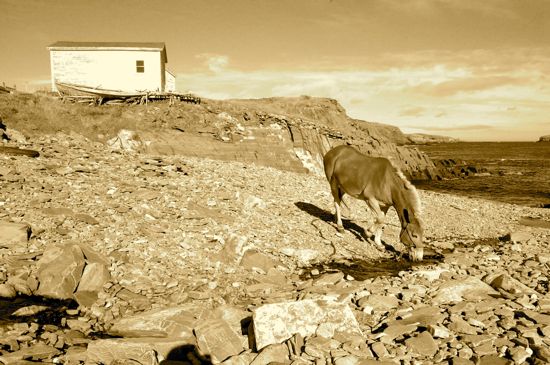 Down at the watering hole. I usually water Polly once a day. Here, she’s sipping from a brook that drains into Trinity Bay. (Maberly, Newfoundland). 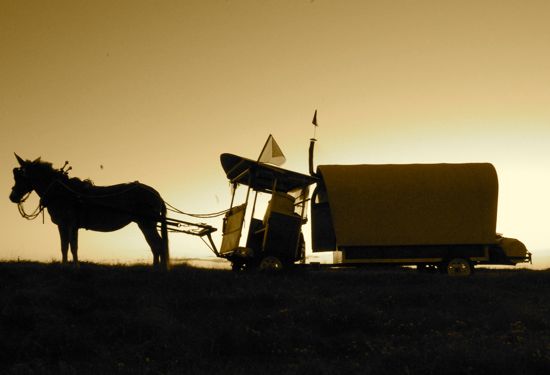 Sundown. Another day of searching draws to a close. Inside, the wagon, the record awaits another day of exploring.

(Map note: the map shows you the point of land in Maberly where Polly and I spent three days asking folks where the photos on the album might be found. While I came up with no conclusive answers, I did learn that Polly likes to eat bamboo forks. Whole other story.)

Glad you made it to Trinity. I was there for the first time this summer after I left Bishop’s Falls via Twillingate and Change Islands. Great whale watching in that area. Heard you ran into my sister Jean Knowles. Hope you get back to the US in time to vote. I’ve had an e-mail change since a hacking episode. Your blog is a real treat. Keep up the good work — you have many a vicarious fan.

After reading your blog, I can only come to one conclusion: I bet you didn’t think the island of Newfoundland was this big did you? I bet you are like most other people who have never been here and think that we are just a small rock…haha..I hope you enjoyed your visit here!

It’s been awhile since I saw you on the side of the road in late June the morning you left Cabbages Farm just outside St. Anthony. I take it you got over the after effects of helping Cabbage ( Cal ) celebrate his birthday. Seems like you are having a great trip around Newfoundland. Would love to know the name of the artist of that piece of Vinyl you are toting along with you. E-mail me and I will not share the info with anyone.

Enjoy the rest of the voyage.

hey fall is here ,leaves are fallin in the creek ,its fire building time ,so when are ya headed south for the winter

Hi Bernie,
I’m glad to have met you and mule Polly on your travels through Bonavista. I think you represent a freedom that a lot of people would like to experience…you certainly appeared relaxed and stress-free to me!
I am still reading your book….Too Proud To Ride A Cow“. Very interesting! I REALLY liked the part where you swallowed the boat…
I`m glad I caught up with you for a second visit and gave Polly the carrots that I had promised her…I hope it made her as happy as it made me.
All the best on your journey.
Take care and stay safe.

Hi there. Bernie here with mule Polly.
Sally. Wow, figure the odds of me running into Jean. Sure hope things are well with you. Heck, with odds like that, we might run into each other on my back through Bishop’s Falls.
Hey there mule man! Here’s the thing. I just went cod fishing and boiled down ten cod livers. That’s about enough for two more weeks of mule wagon travel. By that time, my wagon should stop stinking of fish guts and maybe they’ll let me and Polly back into the United States…. November is looking good for a cabin visit.
George, say hi to Cabbage for me. Tell him my arms are still a few inches longer after toting those sprinkling cans around. As to the artist of the album, it’s a compilation of groups – sorta like one hit wonders that never had hits. Yeah, that should clear things right up!
Bernie – Polly – Trouty, Newfoundland

Hi Bernie & Polly, so glad you both are okay after the accident in Lethbridge. Sorry you had to end your trip in NL like that. However, I’m quite confident it took you on another leg of your journey-albeit quite unplanned! Missed you at my sister Louise(Peddle’s)place for Thanksgiving dinner-you can always depend on them to come through for you ‘in a pinch’.
P.S. Almost through your (“Too Proud to Ride A Cow”) book – in Arizona…. If I don’t see you before you leave our fair island of NL, safe voyage home & take care of yourself.

Hey Bernie, Glad to know you’re still out there. Just thought I would check in from here in Salisbury. Hope you and all the mules are well.

Brenda Forbis, the old girl with the heart of a cowboy.

One Response to The Newfoundland Mission