Ok, so I’ve been off-line for the past few months catching my breath from Woody and Maggie’s cross-country ride. I might as well fess up right now.

This time I’m thinking mule team and wagon; start in North Dakota and just head South. No time frame, no route, just start after the snow melts and head toward the Gulf Coast.

Bob Sundown put it into my head. 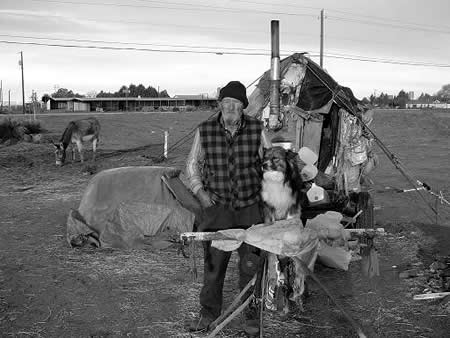 Bob Sundown and dog Skeeter: The man and mutt who struck the spark. (Deming, NM)

I met Bob on my last trip camped on the side of the road outside Deming, New Mexico. He was in his eighties, owned a sheepherder’s wagon and two donkeys. I camped with him for a few days, and after a particularly nasty storm blew my tipi down, he asked “Why don’t you get you some donks and take off in a wagon?”

Suddenly it made sense. Why not just rig up a cart big enough to sleep in and hit the road in that?

Well, I soon forgot Bob’s advice and finished my ride to the Pacific Ocean.

But this is where it gets sticky. I don’t have a mule team. Oh, or a wagon for that matter.

This is the wagon Bernie wants: The “Celerity” model used by the Butterfield stage line.

At first a classic leapte coach lept to mind. But then I read the iron hoops tend to fly off and since I’m a boor when it comes to authenticity I decided maybe I should stick with a wagon made with car wheels.

Oh, and there’s the matter of money. A “real” wagon can cost thousands of dollars and that’s strictly out of line with my dollar-a-pound voyaging budget.

So I decided I’d use rubber tired wagon like Bob’s, one that used car wheels.

So I looked at one. 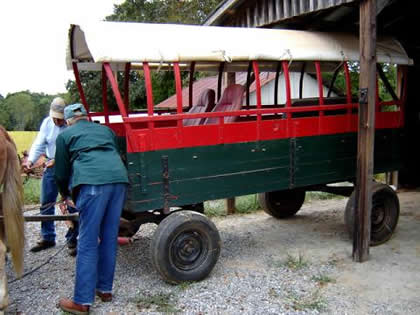 Too bad it wasn’t for sale.

Alright, so things got off to a slow start. And then remained the matter of locomotion, as in mules.

Ok. I hear you saying. “So why don’t you take Woody and Maggie?” Well, Woody’s just too “froggy” as they say in Tombstone, Arizona. The day I got home to the family farm, he dumped me in a creek. A few weeks later, he unseated me in the forest. Too bad they’d just done a controlled burn. I limped back to the barn nursing a sore elbow and ego, hoping nobody would notice the char marks on my shirt.

Then, too, there’s the matter of the book.

For the past few months, I’ve been writing up our journey across America. Re-reading the draft now, I just found eight times when Woody ran away during my trip. Usually he took Maggie in tow. Occasionally I lost them both.

So no, I decided, it just wouldn’t do to set off across America with a beast that ran off on the average of once per state.

So I looked at some mule teams. I found a dandy pair outside Lumberton, North Carolina. They were called Brownie and Penny and belonged to Innis Hester. 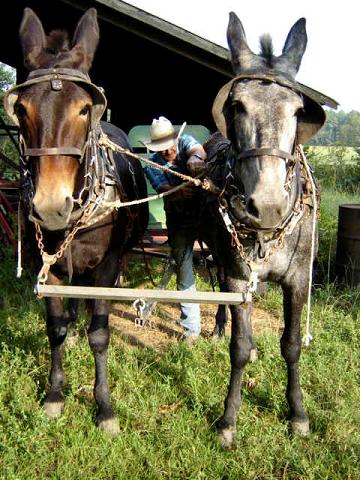 Now here’s a dandy team of mules. (outside Lumberton, NC)

Too bad they cost two dollars a pound.

The good news is that Innis told me he’d help me. So I’m starting from scratch.

In the coming weeks, I’ll be looking for a team of mules and then a wagon. Not a flashy team, not a fancy wagon. Just one that fits my budget and Innis’ eye.

I’ll keep you posted how the search goes.