A good kerosene lantern makes you wish the power would stay off a few more lamp lit meals. A bad one makes you choke and hope like hell the power company gets the lights back on as soon as possible. The truth lies somewhere between the romance and the smoke. 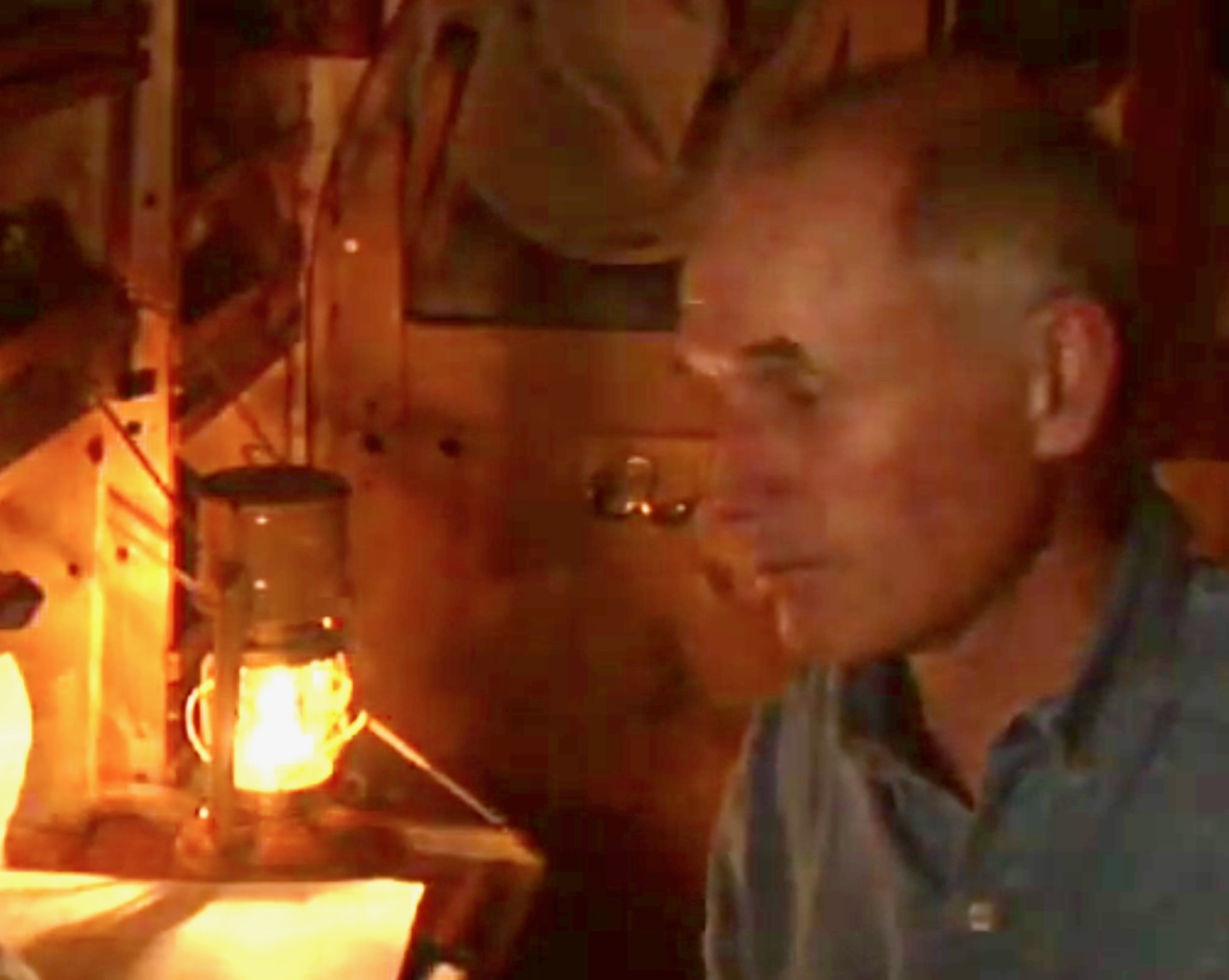 Wagon life with a kerosene lantern on a good evening. From UNC-TV’s “Mule Rider” program about one of my wagon trips through eastern North Carolina. You can view the program at the end of this piece.

Over the years I’ve messed with a bunch of lanterns in my wagon travels. Three stand out. They are:

This is my good lantern. It’s big. It throws a lot of light. I put a match to its inch-wide cotton wick when the lines go down and the bulbs go dark. I also use it for short trips in my Newfie wagon, the wagon mule Polly toured Newfoundland with. 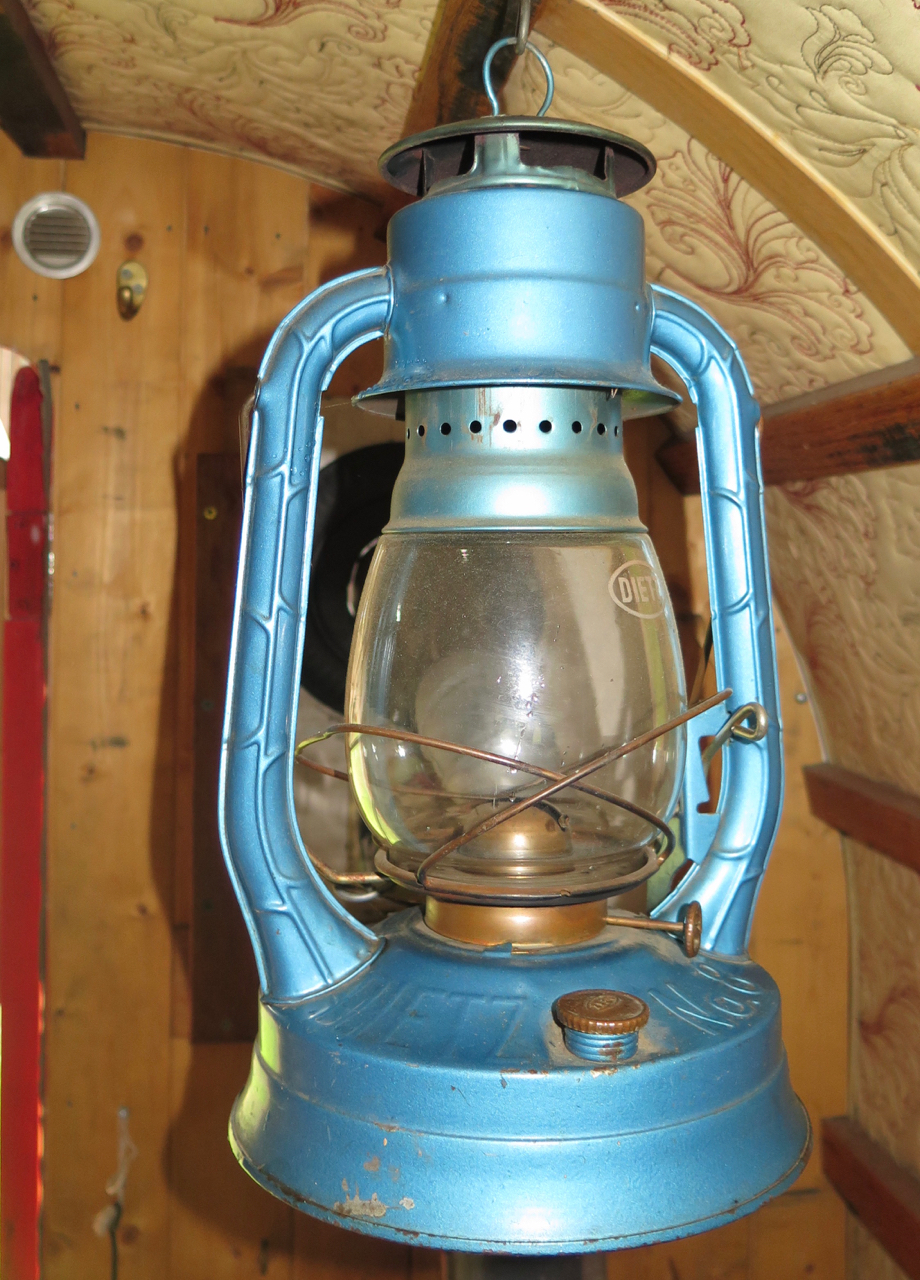 The Dietz No 8 hanging in the Newfie wagon, the wagon I traveled Newfoundland aboard. It throws off enough heat to warm the wagon on a cool night. Only trouble is it makes the wagon smell like an airport. Should I be burning lamp oil instead of kerosene? 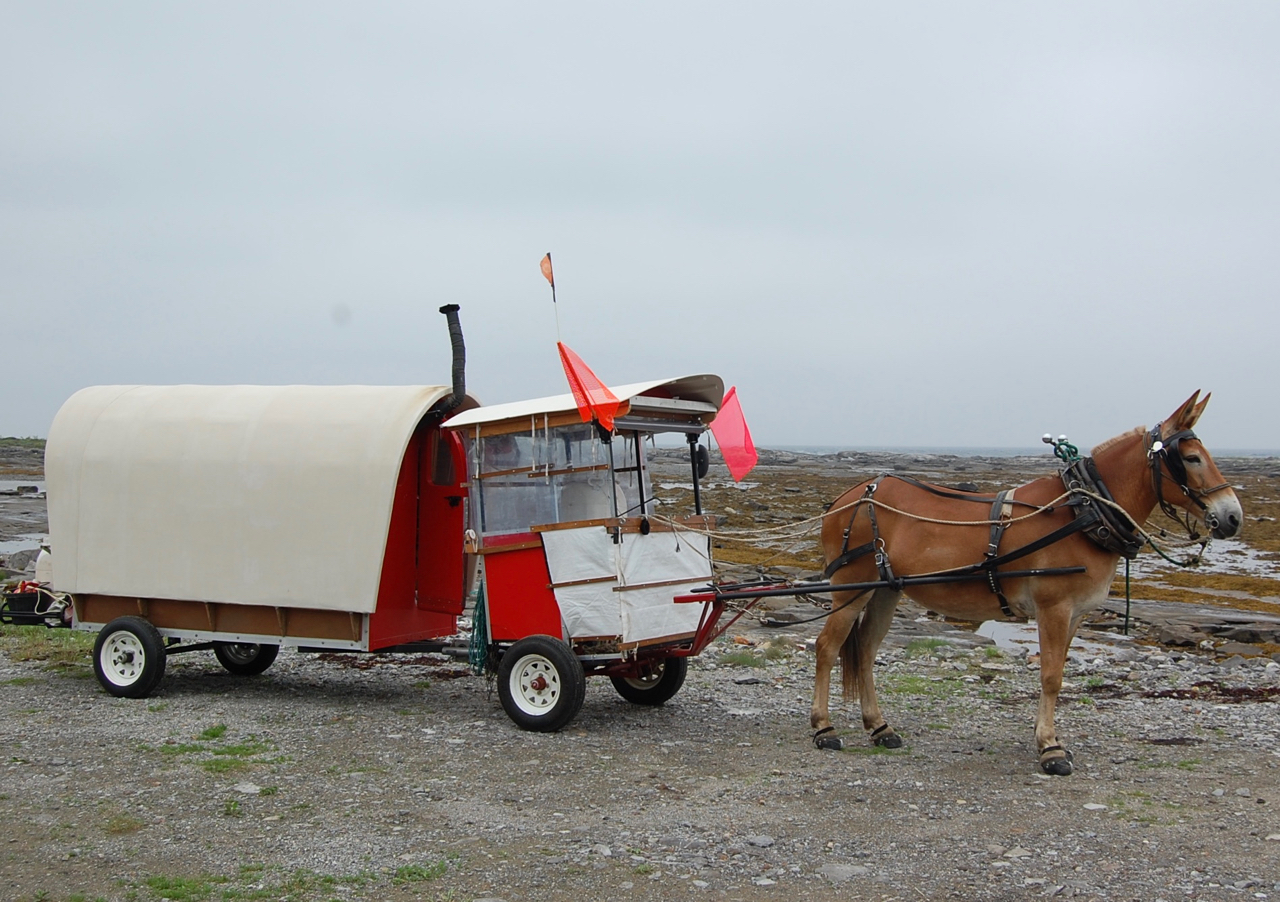 The Newfie wagon in Newfoudland. I built it in my barn. Mule Polly and I ended up spending half a year traveling Newfoundland together in this rig.

The Dietz holds a scary amount of kerosene. It’s what I imagine Misses O’Leary used to burn down Chicago. I’ve had this lamp 20 years and it’s survived sailboats, parties, my Alzheimered mother and multiple wagon voyages.

The only thing about this lantern is it’s big. Really big. So mostly it hangs on my cabin wall, waiting for some tree to fall on the power line and plunge us in to darkness. I sometimes use it in the Lost Sea Expedition wagon, the wagon I used for the Lost Sea Expedition TV series. (You can read plenty more about the series at LostSeaExpedition.com.) 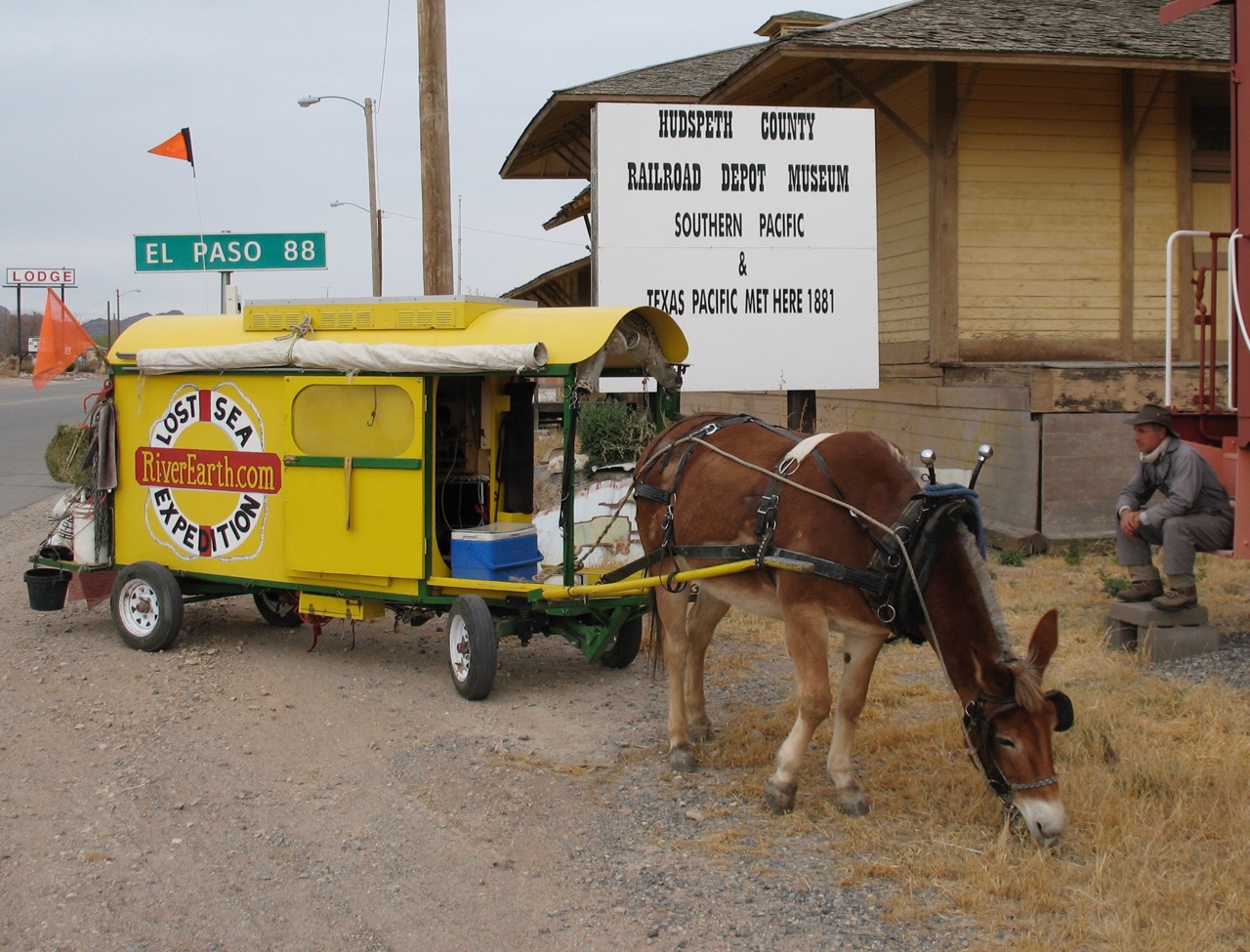 The Lost Sea Expedition wagon toward the end of mule Polly and my 14 month voyage from Canada to Mexico. I filmed the journey with the solar powered gear I carried on my wagon. The series premiered on Rocky Mountain PBS. You can stream it on Amazon free/w Prime and Vimeo. Or you can buy the DVD here at the RiverEarth.com General Store. (Hudspeth County, Texas)

A few years after I traveled from Canada to Mexico for the Lost Sea Expedition, I decided I’d visit Newfoundland with mule Polly. I knew the big Dietz was too large for my wagon. I needed something smaller. Funds were tight so I went to Walmart and bought this cheap lamp. I paid $5.67. It’s called the Florasense Hurricane Oil Lamp. 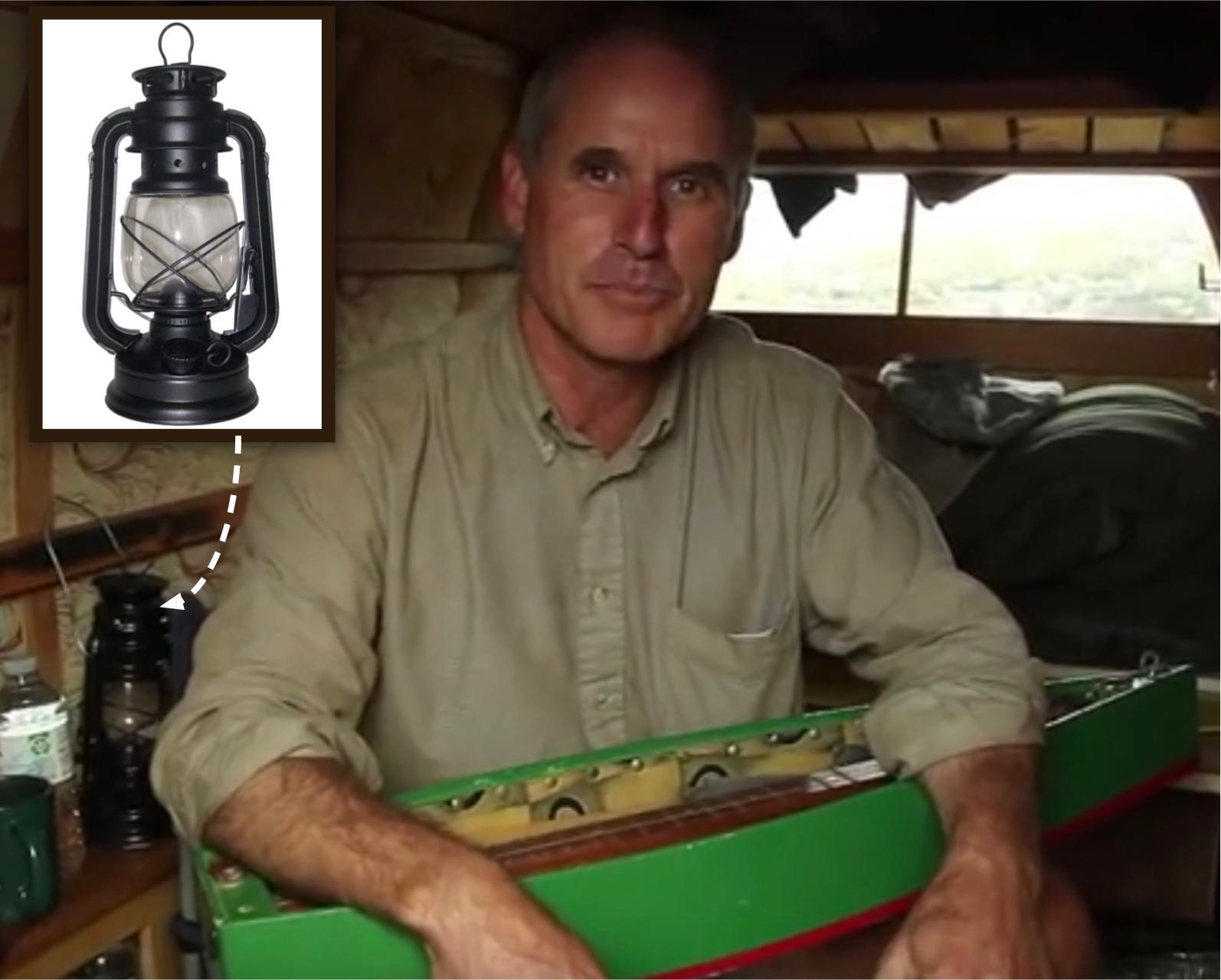 The name inspired equal parts patsy and badass. The “Forasense” made me think of scented oils. The “Hurricane” made me think this lamp could survive Newfoundland. I should sue for misrepresentation.

I bought this lamp because I wanted something cheap, something sacrificial, something I wouldn’t mind breaking.

The day I brought the lantern back to my wagon, before I even fired it up, I sat on it. Broke the glass. Not the lamp’s fault. I hadn’t even left town yet so I drove back to Walmart and forked out another $5.67 for a replacement lamp. Walmart doesn’t sell the glass globe for this lamp. You have to buy the whole lamp.

This second lantern traveled with me 6 months across Newfoundland by mule. It leaked. It stank. It spilled kero at the lightest bump. The glass fell out of the holder. The burner assembly jammed. The top unscrewed. All. The. Time. But it survived. A real piece of junk that was supposed to be a sacrificial lamp so I didn’t destroy my good lamp.

I finally broke it by…. sitting on it. Again.

I didn’t replace it. 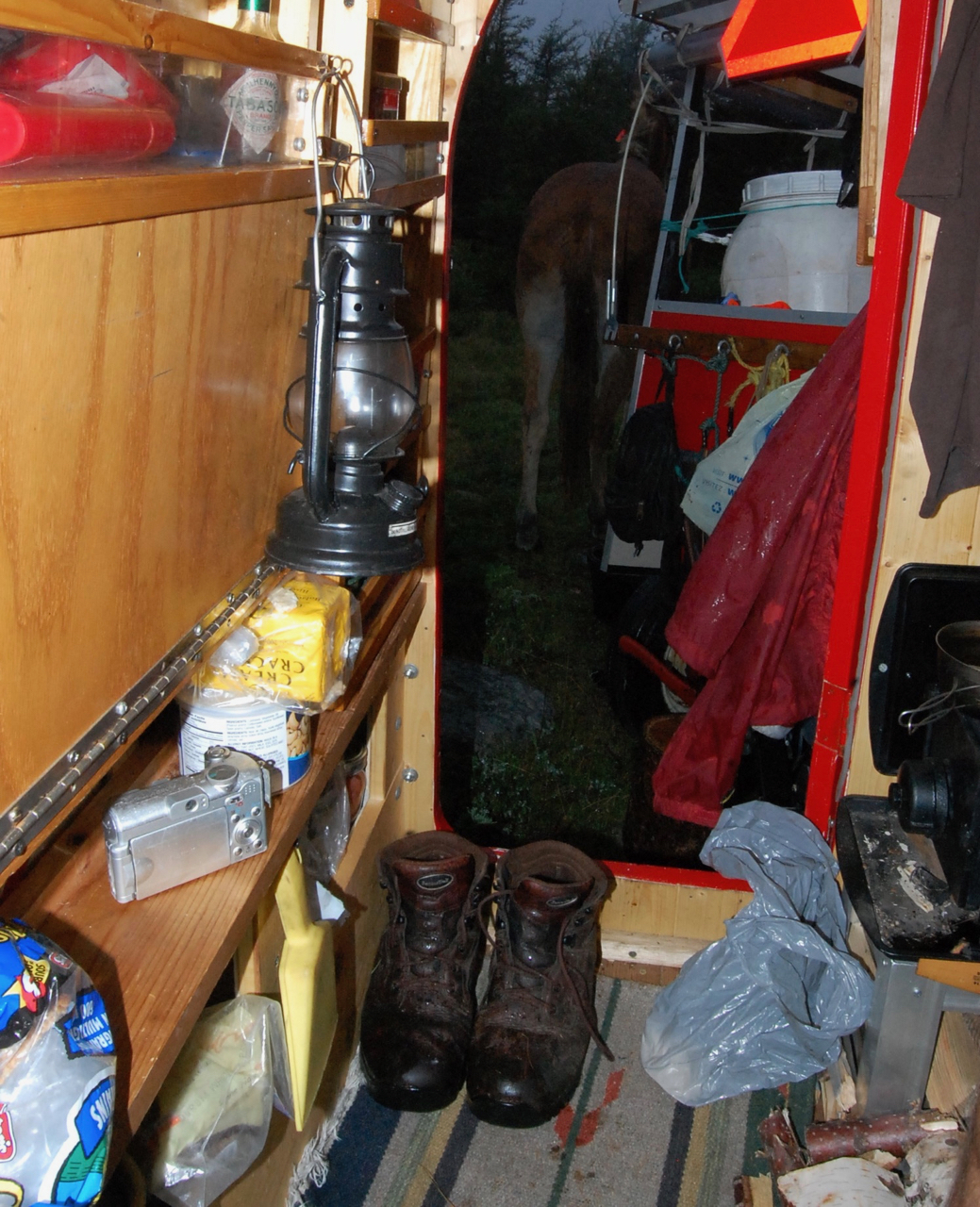 A scene from my wagon journey across Newfoundland. The Chinese Hurricane lantern is hanging from my writing desk. The lamp lived up to its name. The day this photo was taken, a hurricane was passing over top of us. Look closely and you can see a soaked mule Polly hunkered down outside the wagon door.

That lamp did achieve a sliver of immortality. It appears 42 seconds in to this short piece filmed by Tourism Newfoundland and Labrador. Check out the video for a great recap of our voyage.

After my trip across Newfoundland, UNC-TV and “Our State” magazine wanted to join me for one of my wagon rambles through eastern North Carolina. Their film crew would join me for a week on the road to give viewers a look at the wagon life. 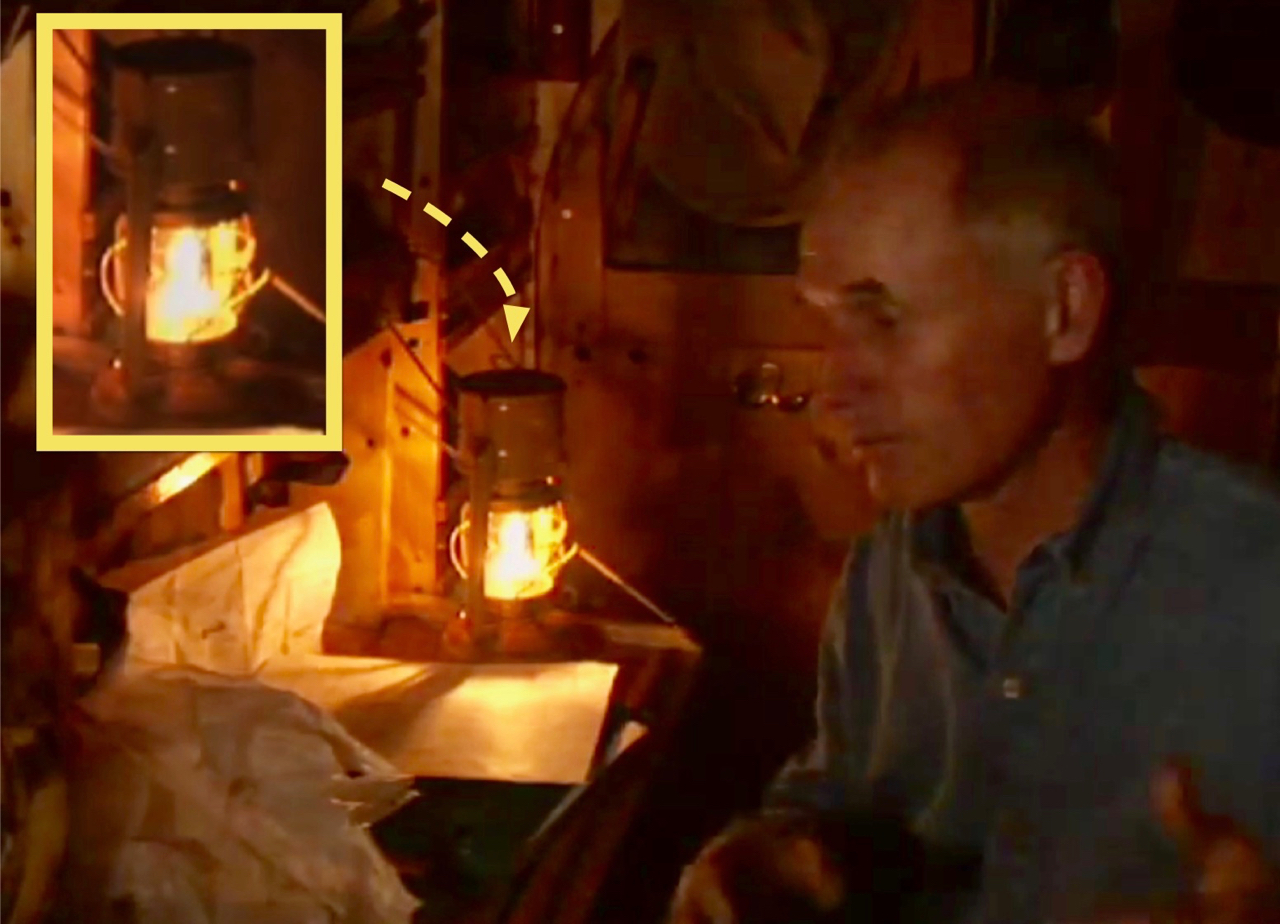 A scene from “Mule Rider”, the piece UNC-TV did about my trip through eastern North Carolina. The yellow lantern I used on that trip appears a few times

A few days before the guys with the big cameras and microphone booms showed up, I smashed my cheap lantern. My buddy Kieth Smith of TownDock.net in Oriental loaned me this lantern. He’d used it for years as an anchor light on his sailboat Heatherbelle. If memory serves, that yellow lamp ended up going to Cuba with Keith and then up the East coast to Nova Scotia.

It proved a great wagon lamp. The narrow wick didn’t throw a lot of light. No matter. After half an hour of lamp light, your eyes get used to the dark so it was plenty to see by. It was tough, too. Strong enough to get jostled around the wagon without breaking.

UNC-TV put together a great piece about that week long wagon trip. It’s called “Mule Rider” and won a regional Emmy for director Morgan Potts. You can see the yellow lamp in the opening scene.

The only hitch in the whole thing was I forgot to return the yellow lantern to my buddy Kieth after I got done using it. I think he was grumpy about it. We’re good friends so that shows you how much he thinks about that lamp. I finally got it back to him. I saw it on his shelf last time I visited. We’re all right now.

Here’s the full UNC-TV / “Our State” magazine piece. Watch for the lantern.

The verdict
Do I have a favorite wagon lantern? Not really. Turns out the big Dietz that throws all the light is too big for long term wagon use. And the cheap lantern threw off enough light but gassed me. And the one I liked the best, the Ever Bright? It’s sitting on my buddy Keith’s shelve, hundreds of miles away. I may have to pay him a visit.