To tour Tasmania by horse, which is my dream, I need a horse. Getting one, now that I’m here in Tassie, hasn’t been as easy as downing a Cascade ale, getting rained on or spotting a wallaby at night. After almost three weeks of searching, I still don’t have a Trigger to ride among the gum trees.

So I’ve decided to visit Australia’s southern-most pub on a “tip store” bike. You know, nothing diverts like a diversion. My thought is to look for horses along the way. 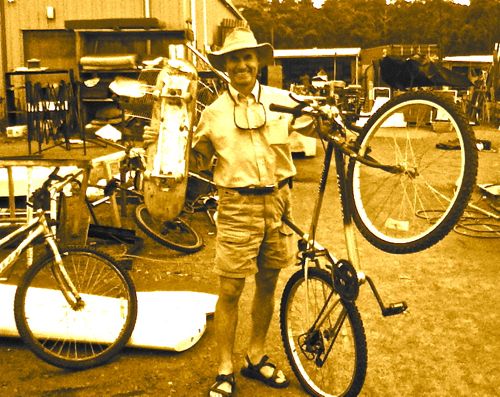 Scene of the tip store bike collection: with all these bikes, it’s hard to decide….

So what’s this tip store?

It’s what Fred Sanford would have run where he Tasmanian. Remember how Fred used to pull up in his raggedy truck piled high with old furniture, tables and that record player that needed a penny on the needle arm so it played right? Well here in Tasmania, the equivalent is the tip store. It’s a charity store often located next to the tip (we call them dumps in the US – or solid waste recovery resource facilities if you want to get all PC with it). They sell the still-useable stuff that would have headed for the trash – like furniture, tables and vinyl records.

For my tip shop ride, I visited the Margate tip shop outside Hobart. There, for $10, I got a bike. Not a new one, mind you. But one with the basics – wheels, pedals, handlebars. And as a sort of Sanford and Son bonus, the shop threw in a few lengths of aluminum angle iron off a sliding door.

Over the next days, between looking at horses, I put together a bike I aim to ride into Tasmania on my horse hunting mission. 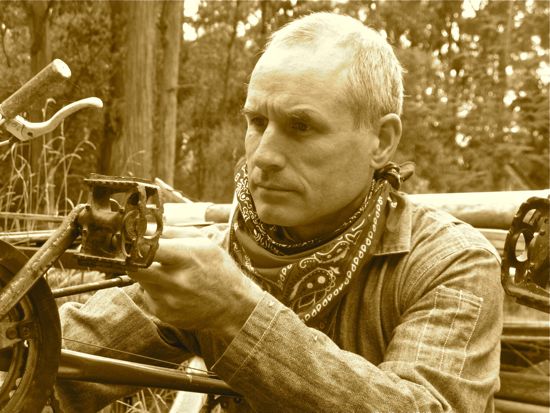 Pedal repair: I’m looking serious because one of the pedals just wouldn’t thread. That’s when I remembered on bikes, one pedal is right hand thread – and the other left…..

To carry my gear, I built a bike rack that fits over the front and rear wheels. Here some improvising was in order. Using a tractor draw bar as a pipe bender, I shaped the straight pieces of aluminum into pieces that would mimic the curve of the wheel. These bent pieces I riveted to pieces of a cast off boat awning. Screwed the whole thing to the bike frame and, voila, bike rack! 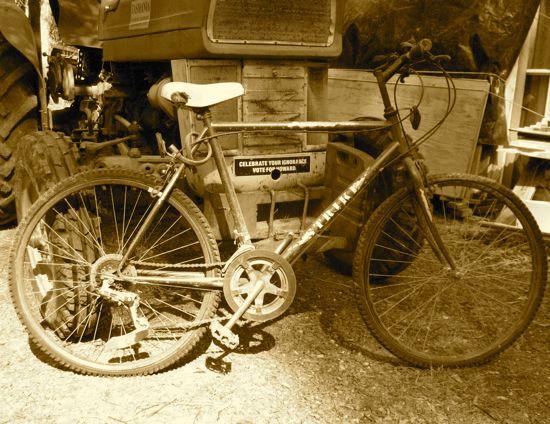 The bike before work began: I used part of the tractor in the background to bend pieces for my bike rack. 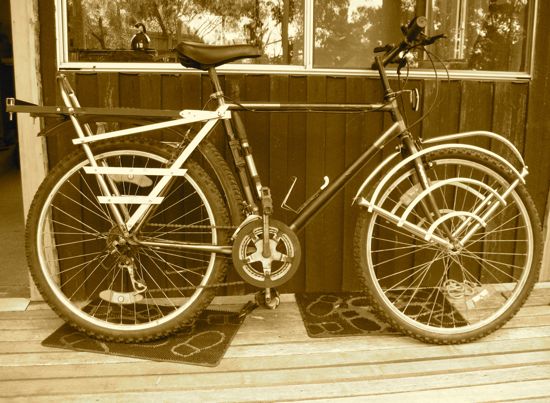 The conversion is complete

For fenders I used old bicycle tires turned inside out. For panniers (that’s what fancy touring bikers call those bags they store stuff in) I used two old backpacks.

And today I hit the road.

So how far will it take me? Hell if I know. Hopefully as far at the Southport pub which is about 80 miles from here in Cygnet. Figure on a couple of days. A man has to visit lots of horses along the way. 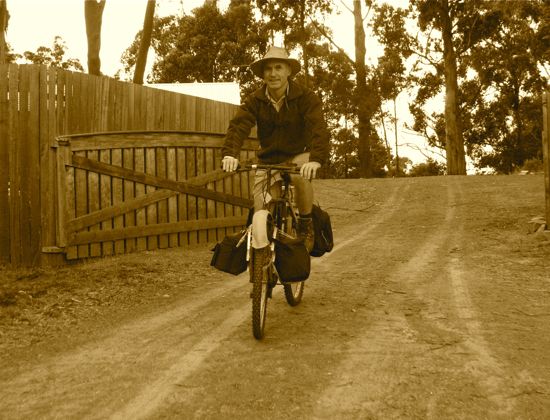 What I do know is that this morning, setting off on my fully loaded bike, I caught myself whistling the Sanford and Son soundtrack. And somewhere, way off in the shadow of memory, I heard Fred crowing “Lamont, come look at this man’s bike…!”

(In the spirit of things musical, coming soon we have a field recording of music in Tasmania. Hold Fast!)

Hey, its your cyclist brother in Paris! Bonjour and félicitations on your ride! Sort of looks like the bike I ride to work every day. Better, actually. I can’t quite tell if it has brakes? Also noticed how you cleaned up the chain a rear derailleur – looking real good!

Keep a sharp eye out for errant wallabies. Traffic to the left, I suppose?

shikes bernie that bike will take you anywhere. and you dont even have to feed it!!
pat says: bernie your bike looks like some of the drawings I had made while I was a draftsman trying to convince my boss that this was a legitimate piece of machineary after I had had too many beers the night before. Rube Goldberg would be proud of you