Sap’s rising and you’re getting the urge to hit the road like back in the day when all it took was a stick and a hankie. Sure, those hobo days are romanticized but face it, the older you get, the more reasons you come up with to stay put.

Still, every year, you wonder. If you don’t run away this year, will you ever? 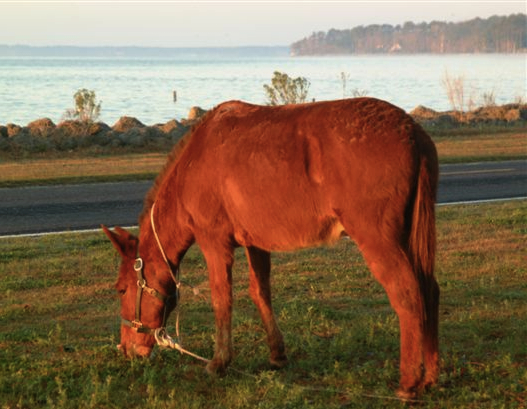 Hoofing It Night #1: Mule Woody, the mule that traveled with me across North Carolina – and later to San Diego – picketed our first night on the road. In addition to tying him up by his halter, I added an extra loop of rope around his neck. Little did I knew, a few hours later, he would almost rip the horse shoes off his feet in an epic tangle – Dawson Creek, NC (Ben Casey photo)

Back when you were a kid and wanted to roll you just did. Then you got a little older and some jingle. That’s when you started doing the math when the runaway notions struck.

I should know. I do it all the time and it goes like this.

You add up your sick leave. Tell yourself the “life is short spiel”. It reminds you of how, the last time you stood around an open casket, you got that surge of energy that told you, instead of driving home, you needed to drive to Yellow Knife right now…

Then you got all accountant about it and piled up what it would cost you to flee – even temporarily. Neatly stacked up the reasons you needed to stick around – the job, the kids, the spouse, the mortgage.

You didn’t hit the road after you threw the first shovel of dirt on Aunt Maude.

But it’s never too late. I’m giving you a chance to indulge your spring runaway. Well, figuratively, at least….

In the coming weeks, I’m doing a series of hour-long “Hoofing It” programs. They’re part of the North Carolina Humanities’ “Road Scholars” program. Your chance to scratch the hit-the-road itch.

Each presentation is based on a 4-month trip I took across North Carolina with a mule, an ancient cavalry saddle and not much else. Think upgraded stick-and-hankie runaway – a hobo’s voyage with silverware and a camera.

So if you’ve got a few drops of runaway sap coursing through your veins, let’s catch up. Or maybe you’re just curious to learn about things North Carolina – or mule. Perhaps you’d like to learn more about the inner journey that accompanies an outer voyage – how the lone traveler deals with loneliness, sadness and joy.

Whatever moves you, it’d be great to see you at one of the “Hoofing It” programs. Here are the dates.