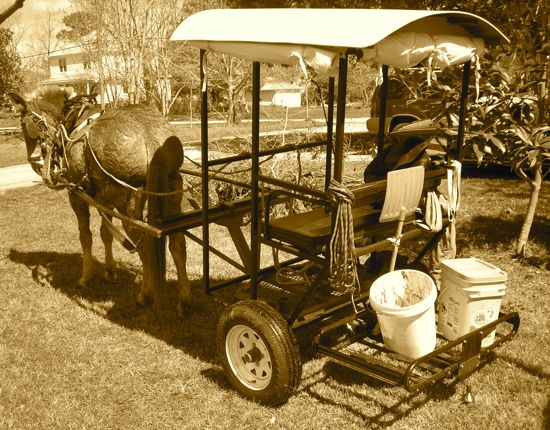 Polly hooked to the cart. Technically, it’s called a forecart. It was designed to pull equine powered implements such as plows, hay rakes or scrapers. I’ve repurposed it to pull my wagon. On the back of the forecart is a tray that holds feed, hay, water and, in this photo, a bucket and shovel for mule emissions.

Flash forward to Oriental, NC. This week, I hauled cart, wagon and Polly to friends Keith and Melinda’s house to start my 10 day shake down tour. You know. Make sure this whole thing works before I schlep it 2000 miles to Canada.

So far so good.

Then I saw the 21-foot sailboat parked in Keith’s driveway. Suddenly, pulling a covered wagon seemed so, well, normal, when I could be towing a gaff-rigged sailboat through North Carolina’s Sailing Capital. So we hitched Polly to the boat and off we went for a spin around the village.

Yeah, in 2012, two grown men pulling a boat with a mule seems out of sync with the times. Boats are pulled with trucks and if you don’t care how folks look at you, you might get by with a Honda.

Not so much. Not anymore.

As Keith and I towed Webster around the village, feeling a tad guilty of Polly’s load, it dawned on us that maybe we weren’t entirely crazy. Call it justification. But it made the whole thing seem less ridiculous when we considered that a boat probably hadn’t been towed through Oriental in over century.

But it probably had been done. Think about it. A hundred years ago, Oriental, like many coastal communities, lived off fishing. The nets would have been hauled by hand, not net winders. The boats would have been powered by sail instead of engines. And when those boats had to be moved on land, they would have been pulled by a horse or mule.

In fact, those boats would have looked a lot like the one we were pulling along Oriental’s oak lined streets. They would have been shoal draft to accommodate the area’s skinny waters. They would have sported four-sided gaff rigged sails and probably a centerboard. Just like the vessel we were towing. 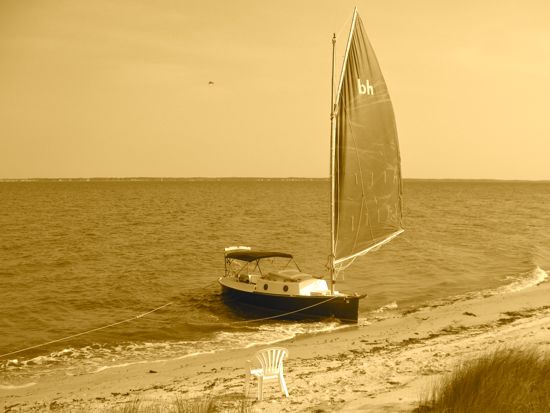 Keith’s sharpie sailboat in its element. Here, “Webster” is parked on a Neuse River beach across from Oriental. Webster is a Bay Hen designed by Rueben Trane. He weighs around 900 pounds and draws under one foot of water with center boards raised. Of fiberglass construction, the hull and rig is based on early fishing vessels that would have plied East Coast waters – including those off Oriental – a century ago.

So gradually, the idea of taking a leisurely stroll with a boat hitched to a mule didn’t seem so crazy.

Then a lady asked us, “why are you towing a boat with a mule?” And suddenly it all seemed wacky again. Could be 100 years before another sharpie’s hauled through the Sailing Capital behind a mule….

Here are a few photos of our afternoon jaunt around Oriental. Up next. Polly and I take a week long tour of Pamlico County. In the wagon. For more on Oriental, drop by TownDock.net. 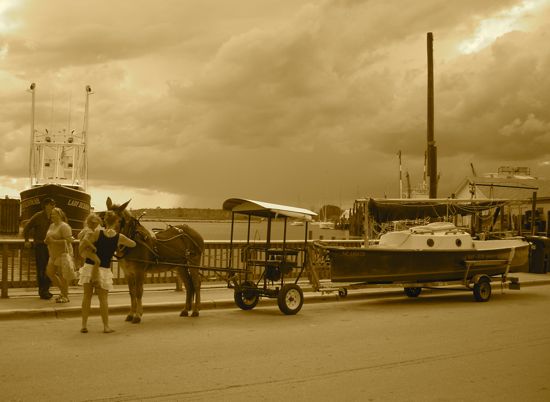 Down at the Oriental Town Dock. Behind Polly, the steel trawler “Lady Deborah”. I think I’d need a bigger team to haul that vessel. 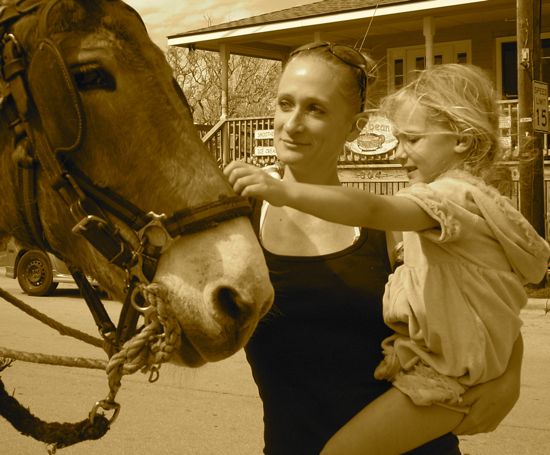 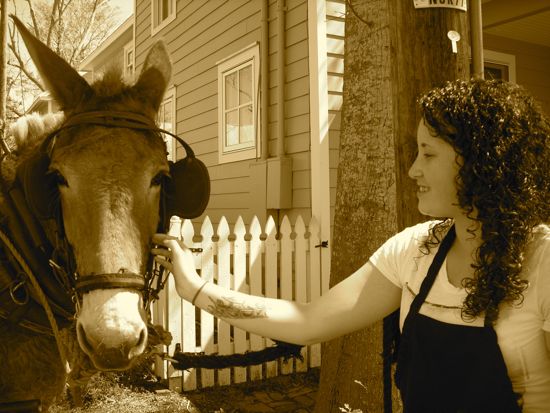 While picking up compost at a local business, Polly and I encountered Megan Maclean. We couldn’t fail to notice Megan’s nautical tattoo. I think Polly enjoyed the closer look… 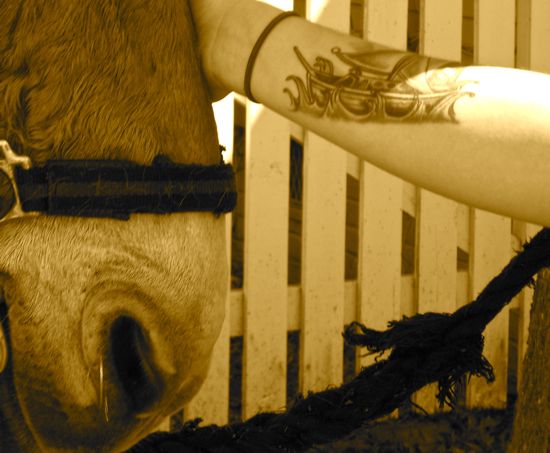 …or maybe it was just getting scratched. 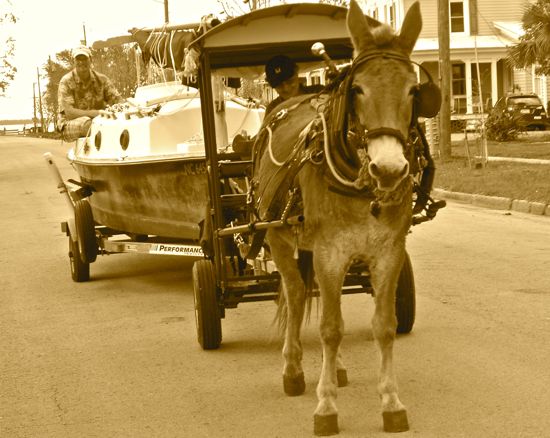 Skipper Ralph. While taking our trailer sailing tour of Oriental, we ran across buddy Ralph. In a flash he was aboard and behind the tiller. 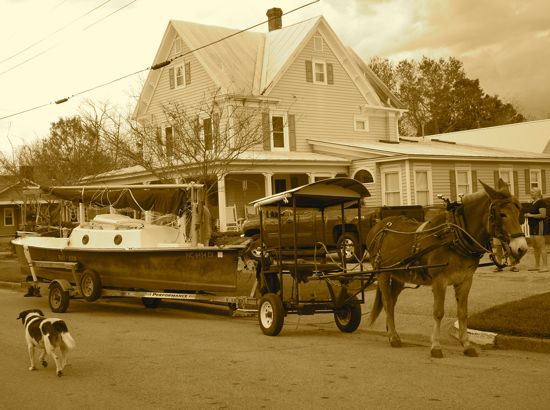 Only one act is yet remaining to complete the gestalt of mule and ocean – you have to take Polly sailing! You said it yourself that you and Keith were feeling guilty about Polly having to haul “Webster” around. I think Webster should reciprocate and haul Polly around. For good measure you could strap the forecart to the bow. But, then again, that might seem a little strange even by Oriental, NC standards! Before making any hasty descions, take a good pull off that Kansas jug first; it will help you to see things more clearly.

Enjoying your book very much. looking forward to reading about your next adventure. (and planning my own). I don’t have any real horse experience tho. Happy Trails!