In the “Uneasy Rider”, Charlie Daniels sings,
“I was takin’ a trip out to LA
Toolin’ along in my Chevrolet
Tokin’ on a number and diggin’ on the radio…
Just as I crossed the Mississippi line
I heard that highway start to whine
And I knew that left rear tire was about to go”

Three lines later, Charlie’s tire has blown and he’s limping down the shoulder on his rim, headed for the Dew Drop Inn, where, eventually, he gets his tire repaired. 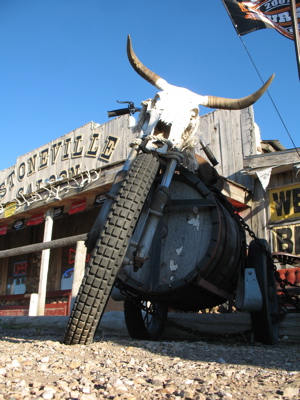 Okay, so Polly and I weren’t tooling along in a smoke filled Chevy when the rear tire blew. We were rolling down Battle Ax Road outside Deerfield Lake, South Dakota, when a slushy hiss announced my tire had blown. Again. For the fourth time. 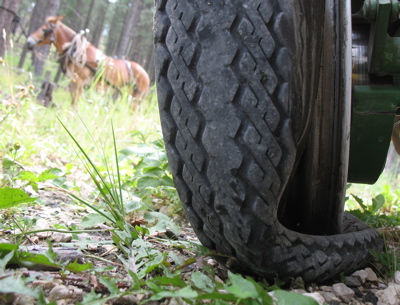 Now in Charlie’s case, he just holed up at a bar, drank a beer and hid his long hair from the mechanics while they fixed his flat. In my case, I’ve been trying to fix my flats with tire sealant from Canada to South Dakota.

The problem is that Fix-a-Flat, while it might re-assure you every time it rolls out from under your driver’s seat and whacks you in the heels, doesn’t work well in rubber mule wagon wheels.

At best, the milky, sticky stuff you squirt into a flat tire to rejuvenate it, lets you limp a few miles to a service station where they can properly fix your flat. At worst, you pump it into your mule wagon tire, limp 20 miles across the prairie, then have the stop-gap repair fail in a milky explosion in the middle of nowhere.

Which is exactly what happened, for the fourth time, on Battle Ax Road.

So why am I even mentioning this?

Because winter’s coming on. 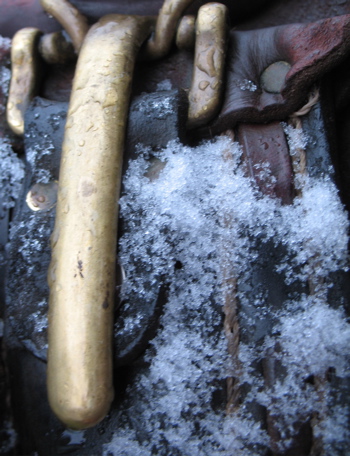 That’s right, with winter settling over the Great Plains, I’ve decided to take a break in the Lost Sea Expedition, head back to North Carolina for the “Too Proud to Ride a Cow” program tour, then return to Hill City, SD, where I left off the Expedition. 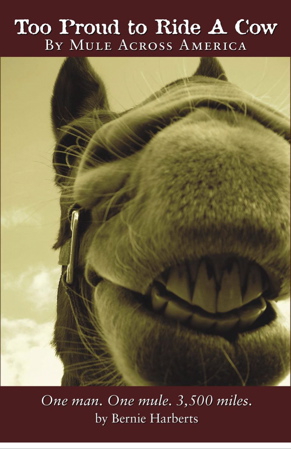 Preview “Too Proud to Ride a Cow”

What does that have to do with tires, you ask?

Well, despite the inconvenience of having a flat on average of every 150 miles, I’ve taken to the pace of my current journey. Polly and I have covered 600 miles of Lost Sea in 6 months. That averages out to 3 miles per day.

Though I’ve shared my journey with you on RiverEarth.com through photos and articles, I’ve actually spent the bulk of my time filming the Lost Sea in hi-def film. My goal? To film as thoroughly as I travel. That takes time. That means taking a break when you hear the figurative rear wheel whine. In this case, it was the onset of winter. Though holing up in a South Dakota cabin for 6 months sounds romantic, it would put a hold on filming for half a year. I’d rather visit with RiverEarth visitors at my upcoming series of North Carolina programs, school visits and book signings. 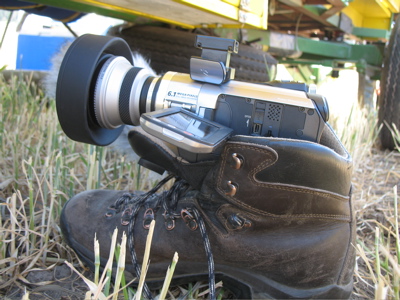 After the “Too Proud” book tour wraps up, Polly and will head back to Hill City, South Dakota to resume our Lost Sea journey to Mexico.

And in the meantime?

Between now and Summer 2008, when Polly and I head back out on the Lost Sea, we’ll be catching you up on Lost Sea travel tips that we didn’t have time to cover earlier. Like how to keep Polly’s rubber shoes stuck on her hooves. And how to find your mule if it ever runs off in Hulett, Wyoming area (Yes, Polly pulled another runner, the trip’s fourth…). 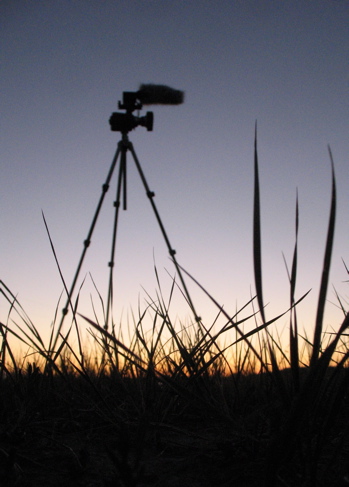 Charlie Daniels will understand if I head from Canada to Mexico – via North Carolina.