Western visions pull the mules and me toward the setting sun: piñon canyons, cut throat trout and big horn sheep. This week I encountered a highway catfish, a gravel barge and a cooling casket. Indiana is proving as colorful as the land I’m riding toward. Here are a few photos from this week on the road, Week 6 of my Mules West ramble. 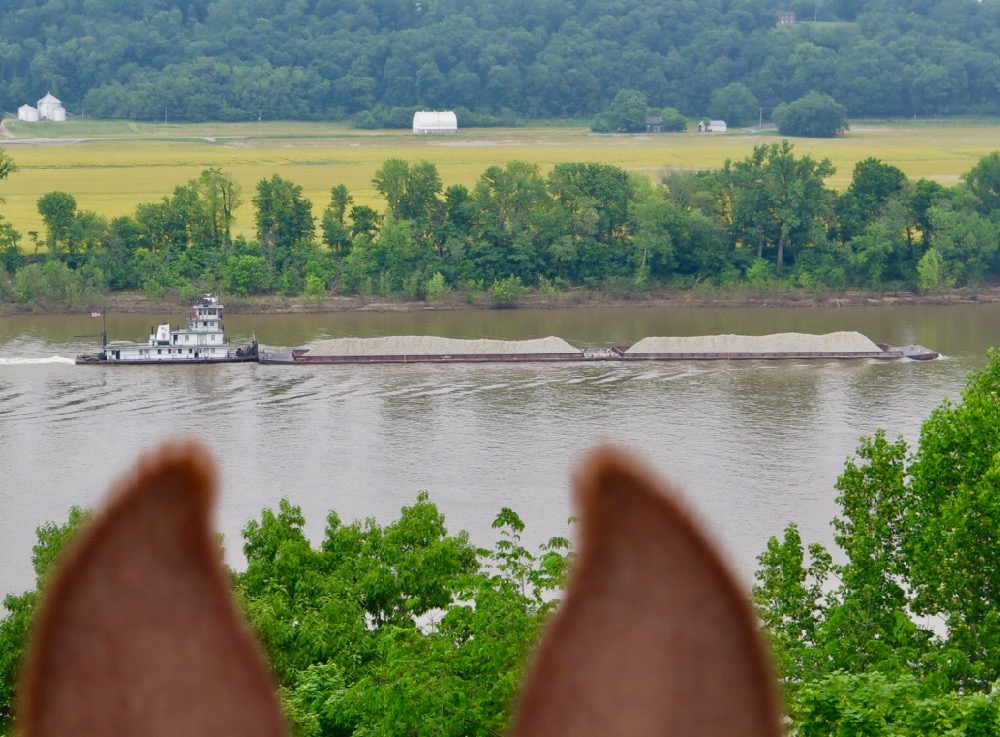 Watchin’ the river go by: Cracker takes in a gravel barge as it heads up the Ohio River outside Brandenburg, Ky. He’s pretty chill but I’m not knowing that….. 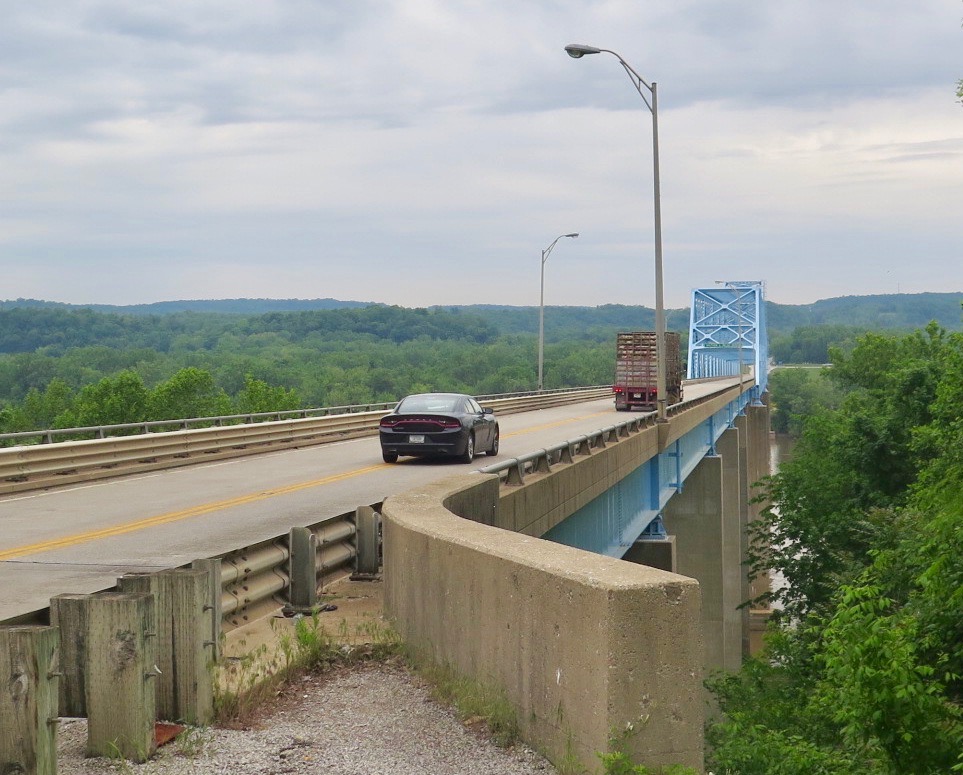 …I have to cross this bridge from Kentucky to Indiana. 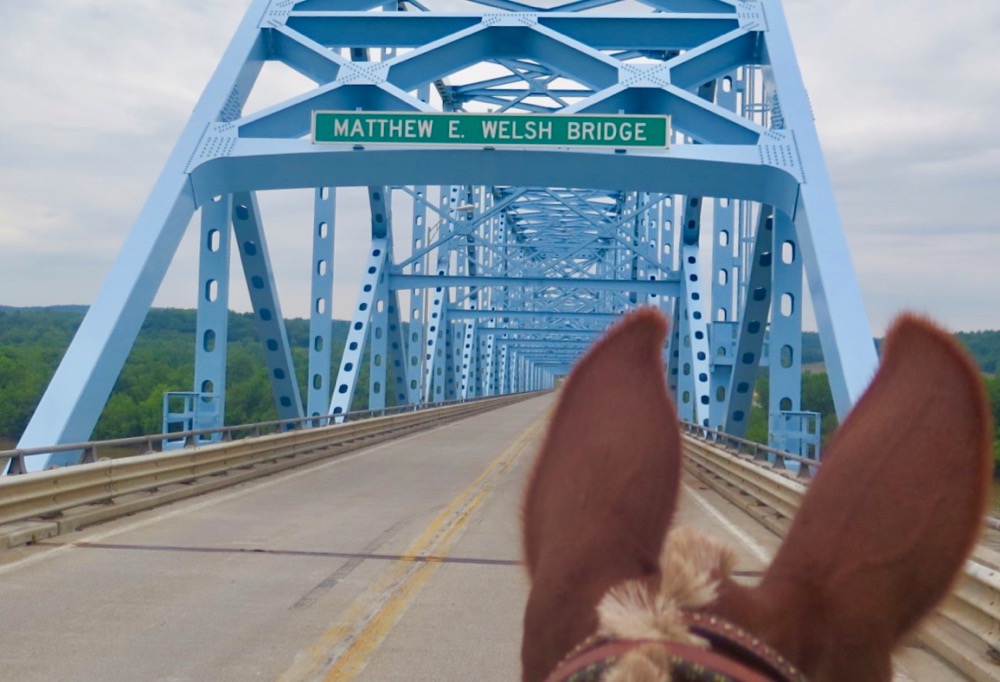 Heading out on to the Mather E Walsh bridge. Luckily, to keep traffic off my tail…. 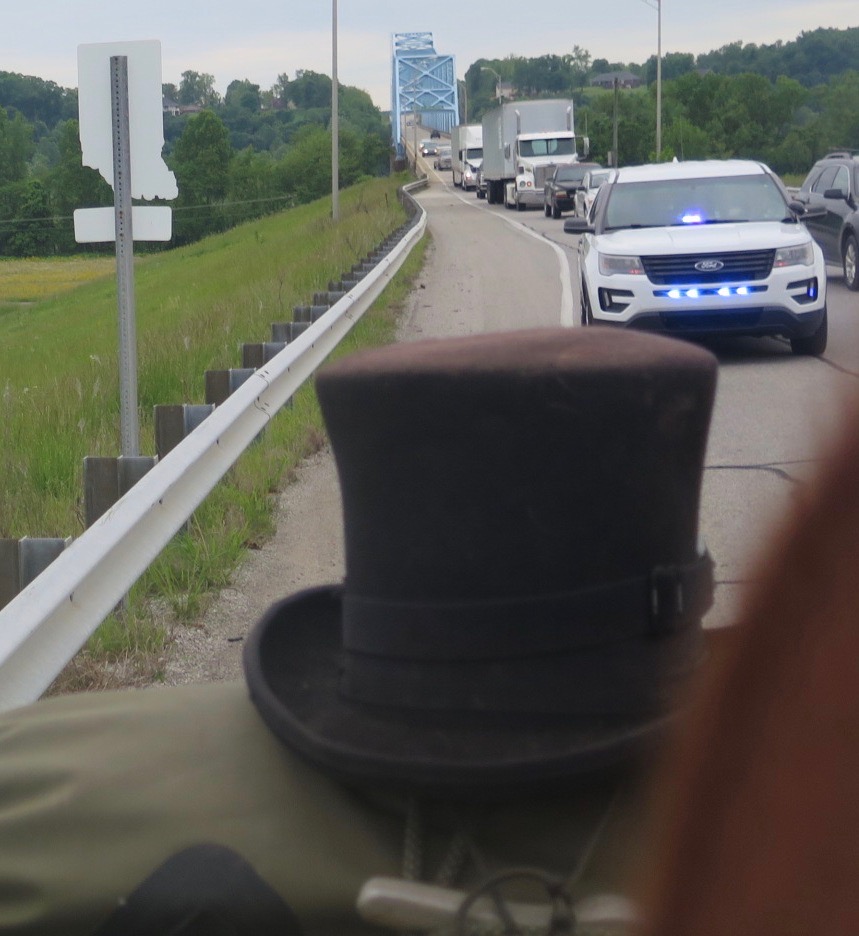 …I had a police escort. Thanks to Brian Haag of the Brandenburg police department for escorting us across. 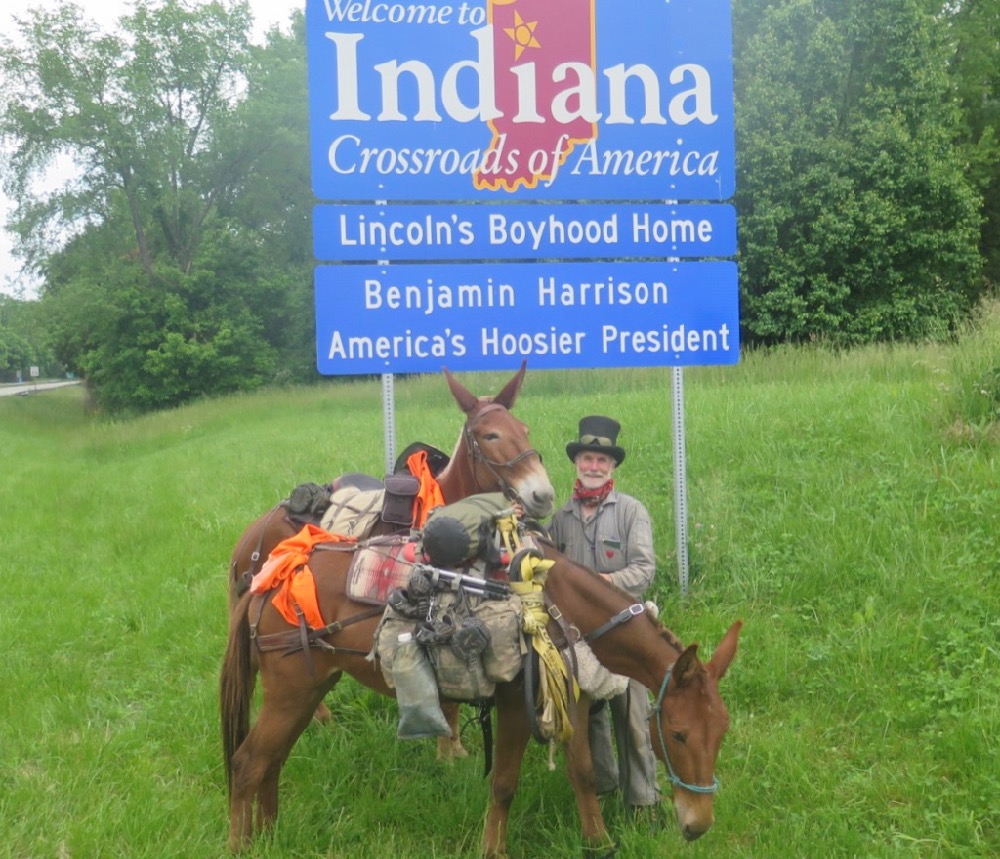 Indiana! In a nod to Lincoln, I donned my top hat. I don’t think they’ll start adding my name the Indiana road signs.

The Ohio river leaves its mark on the land. 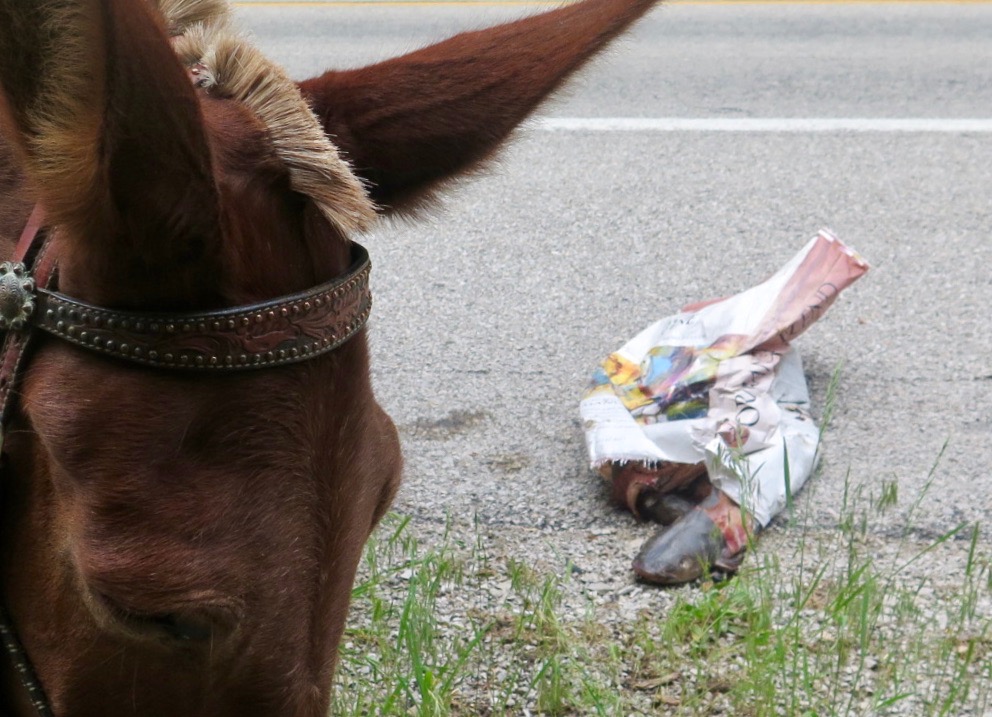 It seemed odd to find a bag full of….fish?….on the side of the road. Closer inspection revealed… 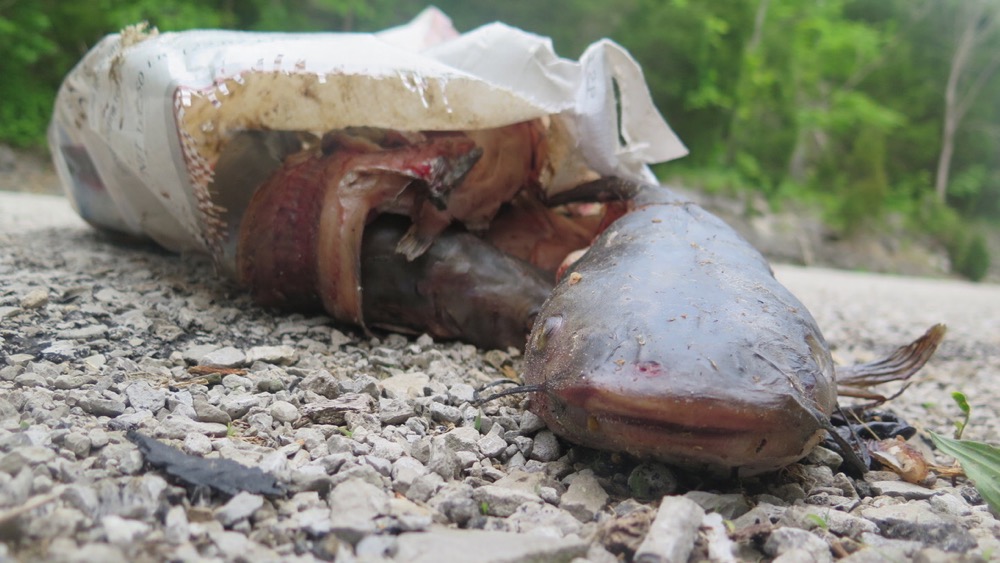 …a sack full of catfish. Some one had filleted the fish and throw the remains on the side of the road.

Indiana marks a turning point in the landscape. We’re tipping from the lusher, eastern land to a dryer landscape. The land is dominated by ever-larger farms and ever-smaller tracts of timber. 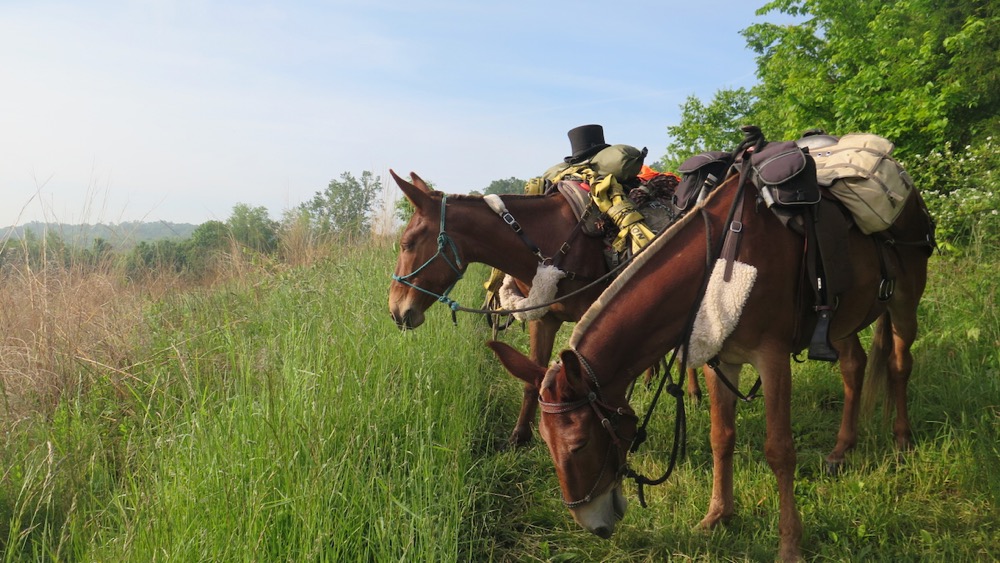 Taking a morning trail ride on Brad and Lana Graham’s land. I spent the night at their farm and the next morning, followed this trail back to my back road route. Thanks Brad and Lana for putting us up (and feeding us roast beef and French toast!). (outside Corydon, IN). 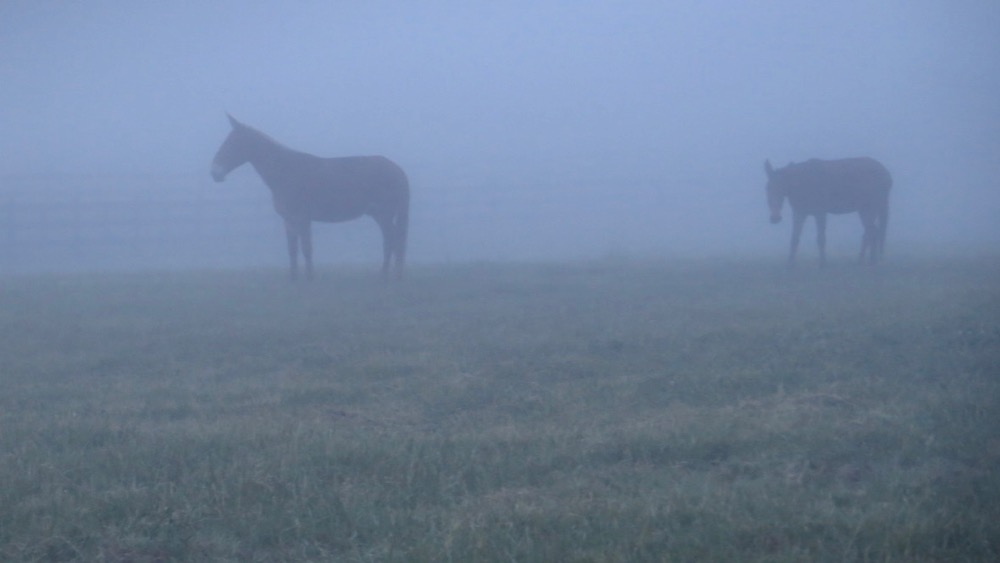 How the day started in Brad and Lana’s pasture. Cracker and Brick sure were happy to be free of their halters and pickets overnight. 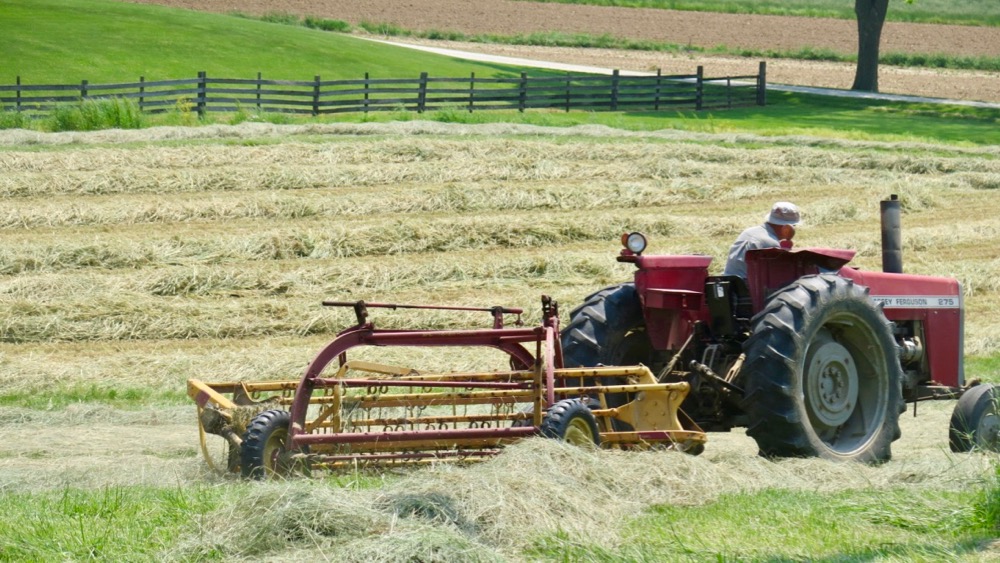 Making hay. Indiana’s had an unusually wet spring. This week (May 19) the farmers got in their first hay cutting. Here, hay is being wind rowed before baling.

What hasn’t changed is folks’ generosity toward the mules and me. 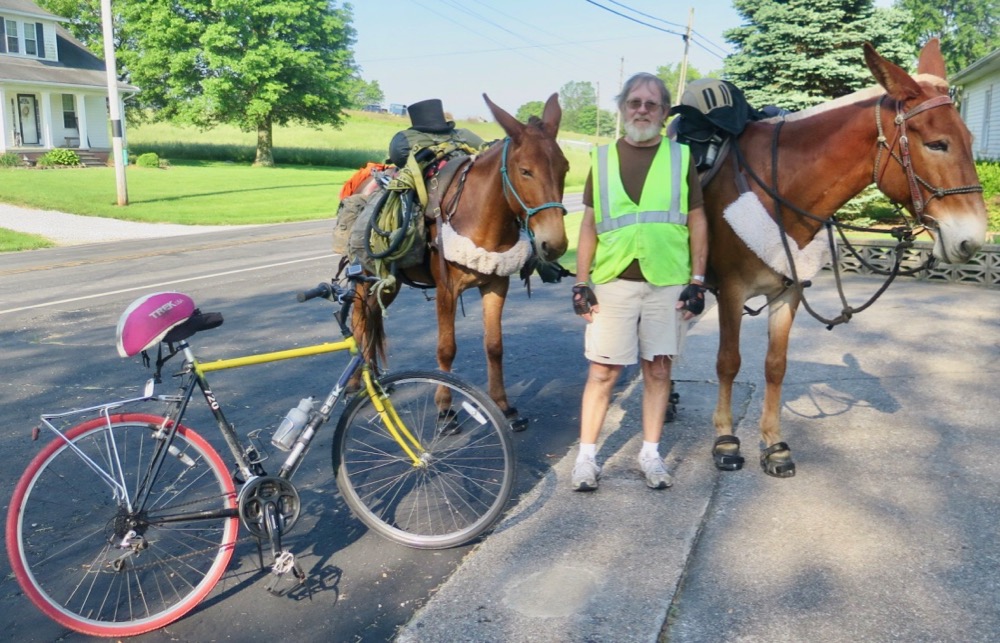 I met Danny Schnell in Schnellville – population 170. He was out riding his bike. He’s biked to 48 states. Of his bike he says, “I have over 37,500 miles on it. I am trying to get 40,000 on it before I retire it.” He gave me 10 bucks for the road saying, “buy yourself lunch in Jasper.” Much appreciate Danny, much appreciated. I’ll be sure to pass on the favor. 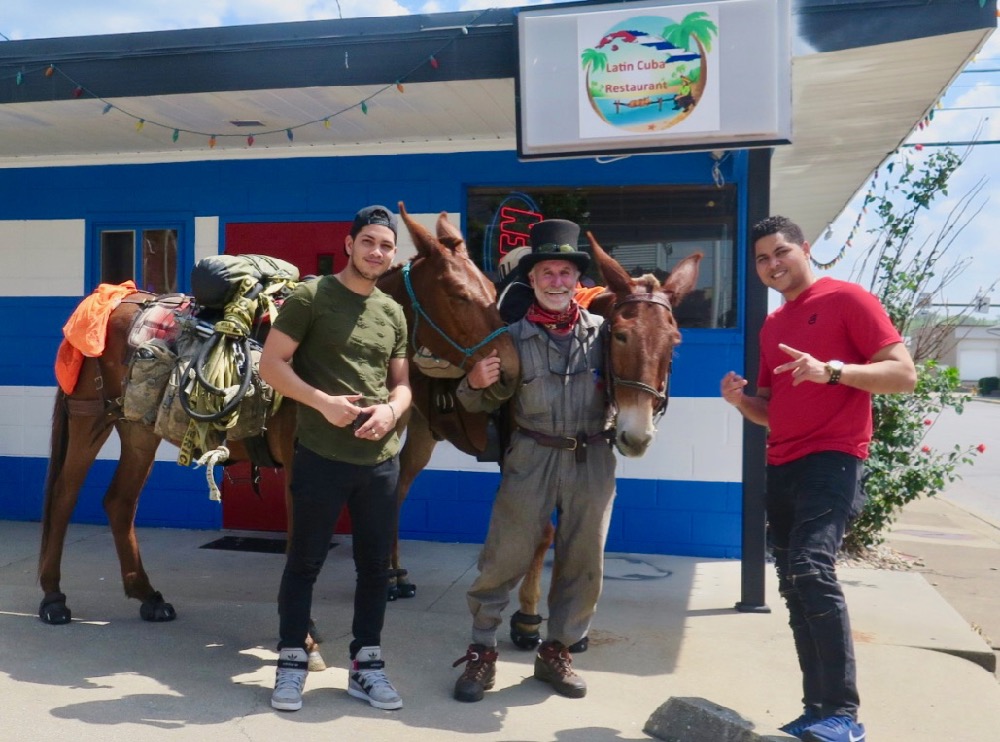 Riding through Jasper, mule Brick lost one of her hoof boots in front of the Latin Cuba Restaurant. I tied the mules to the restaurant porch and the owner, Yasel Garcia Perez, offered me some ice water. That’s Yasel in the red shirt on the right. Before I knew it….. 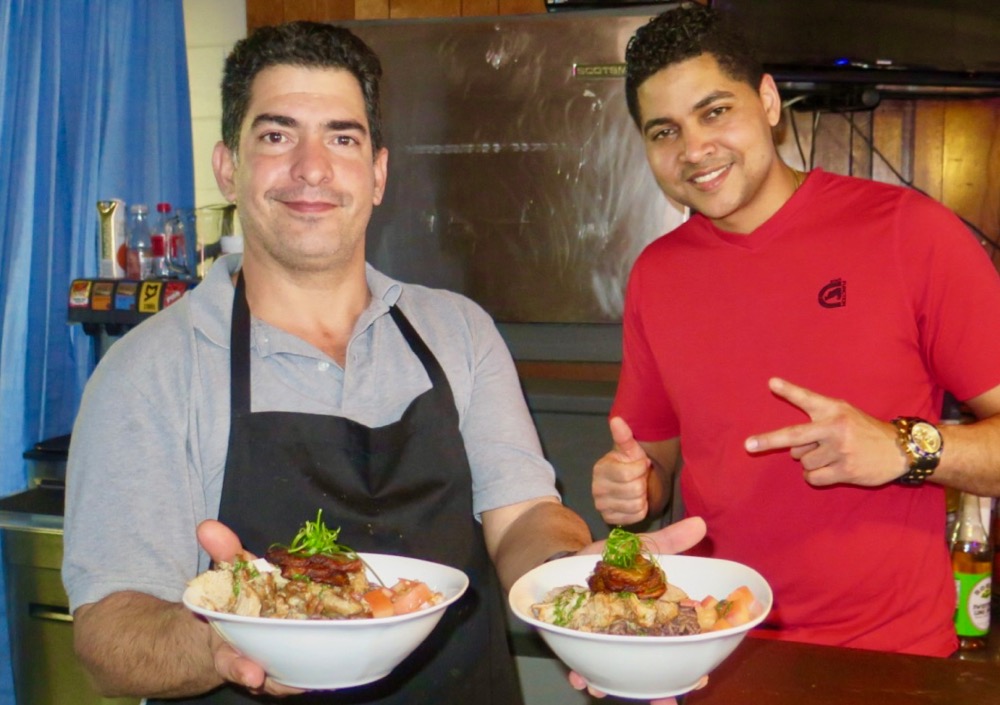 …I was inside the restaurant enjoying a pork and beef dish. Here, cook Rogelio Ramirez and Yasel with the dish Rogelio prepared. This was hands down the best meal I’ve eaten on this trip. Danny, now you know where your $10 went…

So what do I miss the most out here?
My wife Julia. Being apart has been hard. Though we call each other often, it’s not the same as being together. We write each other letters. Unlike a phone converstation, I can carry these physical traces of her in my saddle bag. I treasure these letters. Recently she sent me a letter General Delivery in Brandenburg. I picked it up with the mules. 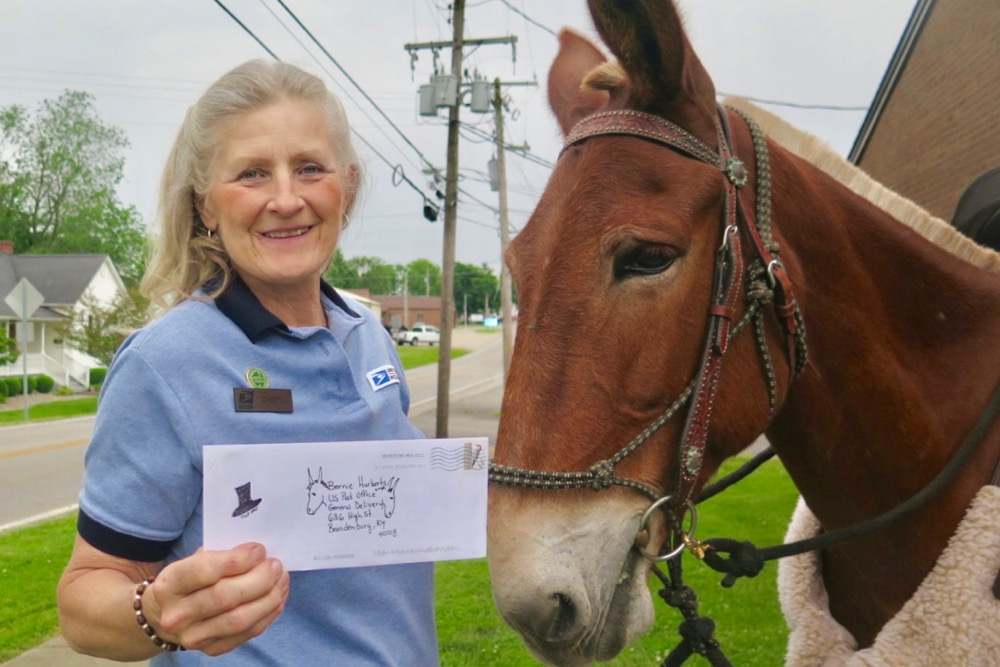 On the road with the mules, I receive mail via General Delivery. Here, Cheryl Harley of the Brandenburg post office with a letter Julia sent me.

Today, May 20, the mules and I depart Duane and Jane Buschkoetter’s. Thanks so much Duane and Jane for putting us up (and giving us a shower, meals and doing our laundry)

This morning we set off toward Petersburg and Vincennes. The Ohio River falls astern. We make our way a wee bit closer to the West.