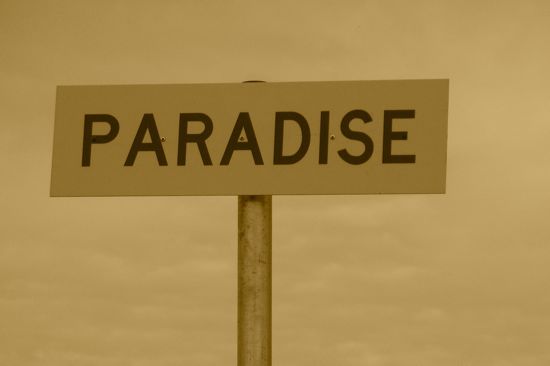 Biking the back roads of Tasmania for almost 5 months now, I’ve had plenty of time to mull things over. Like Paradise.

Paradise. Ever since early man struck a rock to a stick, this notion of Paradise has been around taunting man. The deal was simple. Life here on Earth is tough. If you behave – don’t cave you’re neighbor’s head in with a large rock, think pure thoughts, don’t steal sheep – one day you’ll get to Paradise.

Trouble is, it was a sliding goal. You never actually got to Paradise while on Earth. So no matter how hard you tried, through good deeds and better donations, you never got to enjoy the earthly Nirvana you’d been saving up your wholesome acts for. No flash of light after 20 wholesome years to signal you were entering the Land of Milk and Honey or the Abode of 72 Virgins. Not even a sorry book of matches if you were a well behaved cave dweller.

Nope, to get to Paradise, you had to die. And then, if the cosmic arithmetic penciled out, you were in. Or maybe you weren’t.

It all sounds pretty dicey to me….

Flash forward to now. Recently, traversing the northern coast of Tasmania on my junk shop bike, I took a detour to, you guessed it, Paradise, Tasmania. Just to see how folks there might enlighten me – get a taste of the place. 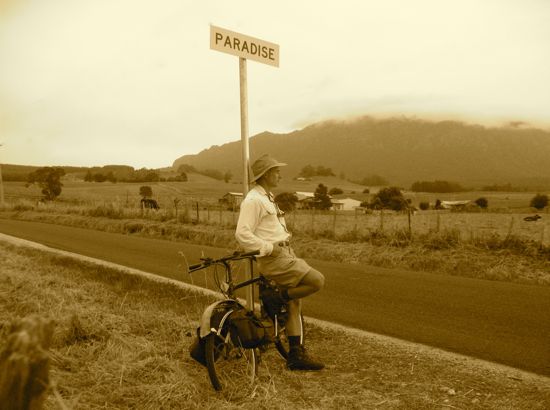 Welcome to Paradise – and in the background, Mount Roland.

There, nestled among at the foot of Mount Roland, I ran into a fellow with an ax. Watching him was a brindle steer and a black dog. 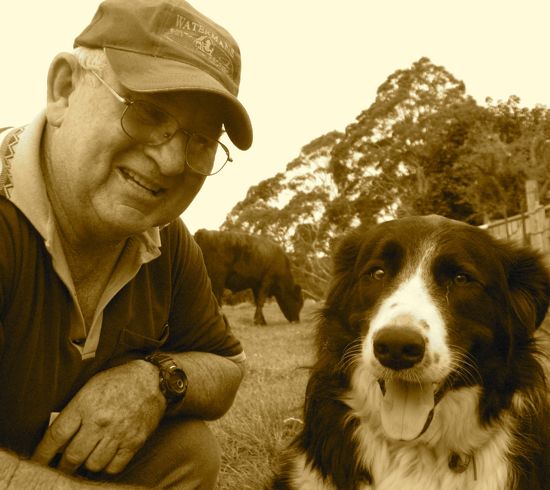 The man’s name was John Chapman and his dog was BJ. He was using the axe to peel the gum logs he was going to split for firewood. Seems Paradise got cool at night. 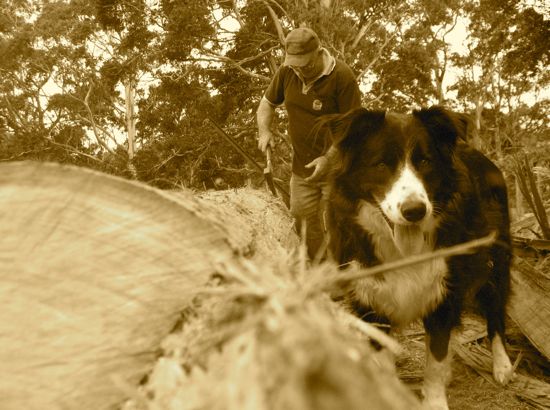 And so we visited a while and he painted a picture of Paradise I figured you’d enjoy. I asked him if it was okay to make an audio recording. He thought it would be fine. So there in Paradise, with my bike leaned against the welcome sign, I captured one man’s version of heaven.

As the recording starts, you can hear John talking with his dog BJ. Then he goes on to describe life in Paradise. How the sign occasionally goes missing. How the dogs aren’t all perfectly behaved. And why, when I first met him, he was peeling logs with an ax.

Now I won’t get all semantic on you and pull apart the theoretical Paradise from the earthly one. You have to decide for yourself which one you believe in. But there in the lee of mount Roland, with a cow and a dog and a man explaining why his life was good, I know which one I’d live right for. Or at least keep pedaling toward with what I already had.

So, ready to listen to John Chapman describe Paradise? Then click on the audio player below. 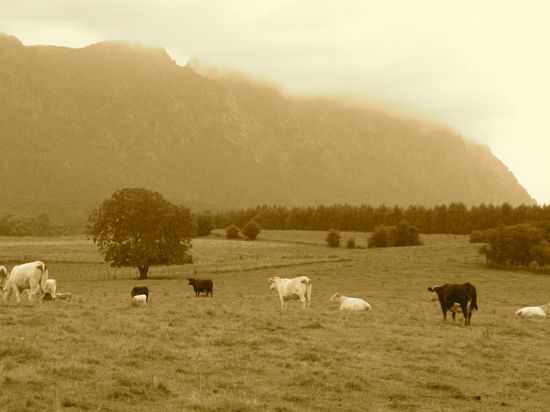 Mount Roland in the mist. John says if there’s three days’ of mist around the peak, it’s going to rain in Paradise 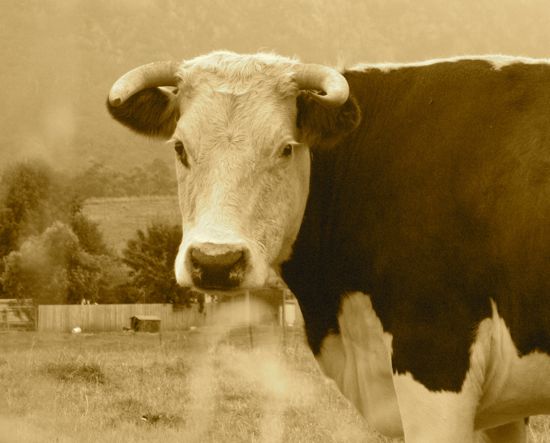 A cow in Paradise 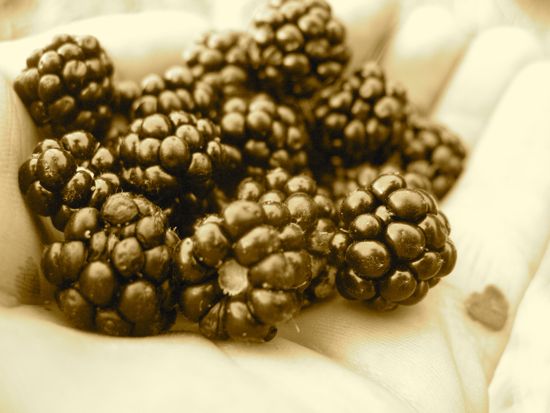 Milk and honey flow down the streets of some folks’ heaven. In Paradise, Tasmania, it’s blackberries 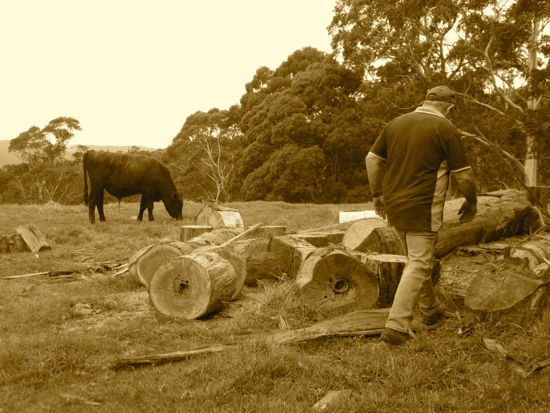 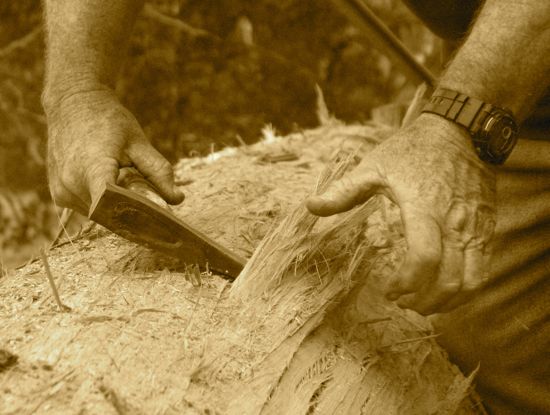 Paradise is only fifteen minutes away from the Sheffield emergency room

Bernie,
I enjoyed learning about Paradise.
I wondered what kind of dog BJ was. He looks a lot like my Australian Shepherd Coupe.
Take care.

Right on Carolyn. BJ is of Aussie shepherd “descent” as John calls it. Sort of like me and the folks in Paradise – good lookin’, loves to eat, humble, but not quite purebred. Give Coupe a pat for me. Sure look forward to seeing you soon back in Oriental. Bernie Strahan Tasmania

enjoying your travels …
as i am currently doing hard labor
to earn a few bucks working with a
bloke i think you may know …
fellow calls himself bob skelding.
lad turned me onto your site.

i suspect …
Paradise is more of an attitude …
than it is a place, eh?

Terry, Great to hear you’re rubbing shoulders with Bob of Biscuit Wagon fame! Don’t let him talk you into running away with him after work knocks off. Then again, I’m sure you could drive a wagon to Paradise just as easy as a bike. As you say, it’s just an attitude. Give Bob and the gang my regards! Bernie Strahan Tasmania (which is just paradise by another name)