Welcome to the Roaring Forties

Roaring Forties. The words conjure images of the salt captain braced against the ship’s helm, sparks flying from his pipe. Sails tattered. Lee shore looming, hard and horrible, under the dolphin striker stay. 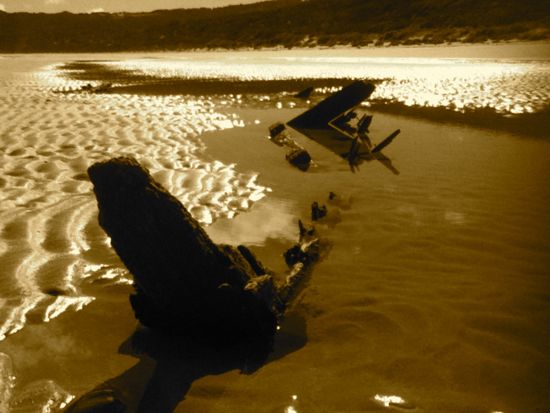 But just what are the Roaring Forties? Where do they lie? What do they sound like?

A few years ago, I got close to them in my sailboat “Sea Bird”. Sailing alone around the world, I entered the Southern Ocean to sail around South Africa’s Cape of Good Hope. I’d been close to the Roaring Forties then – but not quite. The Roaring Forties actually begin about 200 miles below the southern tip of Africa, the so-called Cape of Storms. 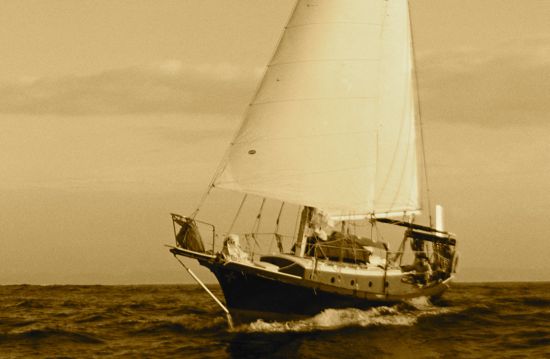 Off the Cape of Good Hope, South Africa, Sea Bird heads toward, but not quite into, the Roaring Forties (Will Seabrooke photo)

Flash forward to Flinders Island, Tasmania. Recently, instead of entering the Roaring Forties on the deck of a plunging barque, I crossed the Fortieth Parallel on my junk shop bike.

Technically, the Roaring Forties run from parallels forty to fifty south – easy to define for a cartographer but hard to explain to a poet.

Which makes Flinders Island, Tasmania, the length of which I recently pedaled on my $10 biker, unique. The 40th Parallel only crosses four land masses and Flinders is one of them (the other three are South America, New Zealand and King Island, Tasmania.

With so little land standing in the way of the wind, it can whip around the globe practically non-stop, raising enormous seas in the process. This is what make the Roaring Forties so legendary. Recently, a weather buoy off Pedra Branca, an island south of Tasmania, measured a wave over 70 feet high. 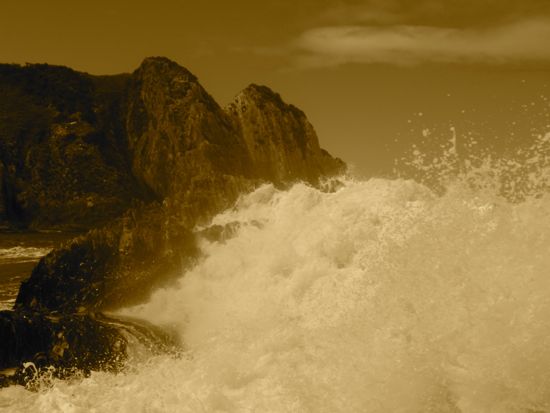 Roaring Forties surf: a 70 foot high wave was measured by a Waverider buoy off the island of Pedra Branca less than 30 miles from where this photo was taken. (Outside Port Davey, Tasmania)

At sea, of course, there’s no sign at the 40th parallel saying “Welcome to the Roaring Forties”. So it’s largely a matter of feel, of heart, of standing on the deck of your ship and saying, “damn, the wind really does sound louder down here” or “sheeesh that albatross is wheeling hard and fast across the sky”. It’s the poet thing. The trying to explain with words and pictures what you can’t capture with numbers.

Trouble is, I’m an engineer at heart and need figures, lines and data, to describe what I’m seeing. 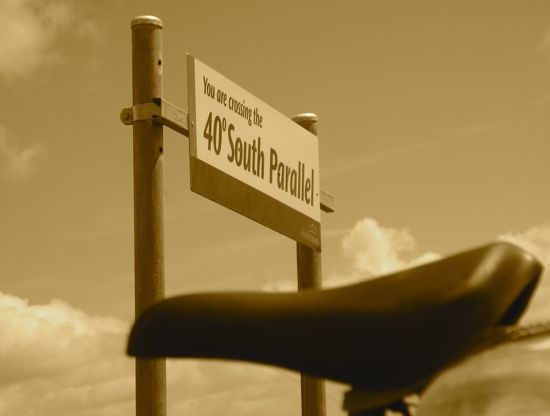 You are crossing the 40 degree South Parallel

On my recent visit to Flinders Island, on a day windy enough to mute my cursing, I came across a sign. “You are crossing the 40 degree South Parallel” it read. From it, torn free by the howling wind, came a low, slow moan. Aha! Here was something I could capture with my audio recorder– the sound of the wind blowing through the bolt holes on the Roaring Forties sign. Something I could cram into my magic black box. Something I could let back out for you to listen to. 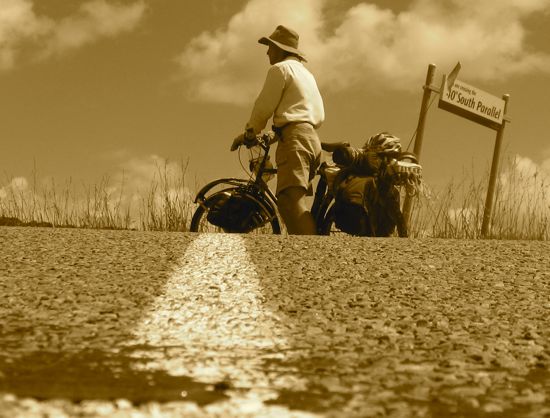 But first, I reckoned a bit of ceremony was in order. I mean really, entering the Roaring Forties, a man doesn’t send a text message. He has a drink.

Lifting a page from the mariner’s book, I decided a toast was in order. Rummaging through my gear, I extracted a small jar labeled “Apricot Jam”. A gift of new friends in Killiecrankie, it came into my life full of apricot jam but now contained the remains of my scotch. Leaning against the sign roaring above my head, I raised the short jar to my lips. 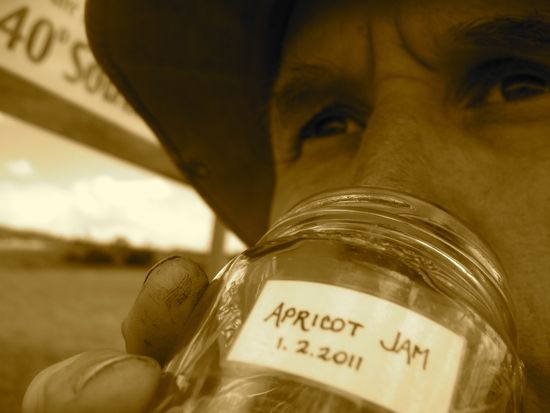 Cheers! The jar contains stronger contents than its label implies. I mean really, what sea captain worth his weight in black powder would toast the Roaring Forties with fruit jam…?

Which is when I heard the buzz. Thin and high, not rumbling and low like you’d expect from a stormy sky.

Keep it coming. I follow you. Our friend, Bob, is finially back on again. If the two of you ever get together, I would like to be there just to listen to the adventure. Ted

Hi there Ted, Good to hear you’re enjoying the posts. I just saw Bob’s back up and posting. Last time I saw Bob, were were sitting in the Biscuit Wagon. He had just taken it over and we had a fine gam reliving things gone right – and wrong – on the trail. Sure wish I’d had my recorder going then. Sounds like a bang up interview that needs chasing down! Hold Fast Bernie Sheffield Tasmania

Hi Bernie:I’ve been following you on your new adventure and it sounds like you are haveing a great time. It is certainly different than traveling across the plains of Kansas. It must be hard to change from being a muleskinner to a fellow riding an old bike. I was wondering if you miss the deep fried rattlesnake or the windy and hot days on the prairie. We are still out here and are enjoying your stories. Good luck to you. Dean LeSage.

Great hearing from you Dean! Ah, the day we hitched mule Polly to Ed’s buckboard and went for a spin in the oil patch. And that rattle snake fry-up we had in the buggy barn. Yeah, well, I can’t do that on the old $10 bike here in Tassie! Then again, I don’t see how I could have loaded mule Polly onto the crayfish boat that took me down into the Southern Ocean. Sure hope it’s going well with you all Hays-way! Give my regards to all the snake eaters! Bernie in Burnie Tasmania

Bernie, It is great to stumble across your site while documenting some information about the Roaring Forties and Whistling Sixties.I’m writing a (short as possible)resume for my 12 year old grandson detailing the high spots of my two trips to Antarctica and one trip to the Arctic while serving a hitch with the U.S.Navy.He is crazy over penguins and unfortunately all my 8 mm film fell victim to father time showing no mercy for the penguins it displayed. Our trip to Northern Canada was to carry supplies there for construction of the D.E.W. line during the “Cold War” during Summer of 1955.After returning to our port in Norfolk,we loaded for Operation Deepfreeze 1 in Antarctica and replicated that trip the following Northern Winter. Since your from N.C.,you may be familiar with Ocean City,Md.My wife and I lived there for 20 years and now live in Salisbury.——-The cook just rang the lunch bell (intercom).Thanks for the interesting tales. Must run.———Clyde