2009 may have been the year I completed the Lost Sea Expedition, my Canada to Mexico wagon trek, but the trip isn’t over.

In the course of the 2,500 mile, 10-state voyage, I shot over 6,500 minutes of Hi-Def film footage. Accompanied by a similiar amount of audio recordings. Now, it’s time to put this store of footage into a documentary film. 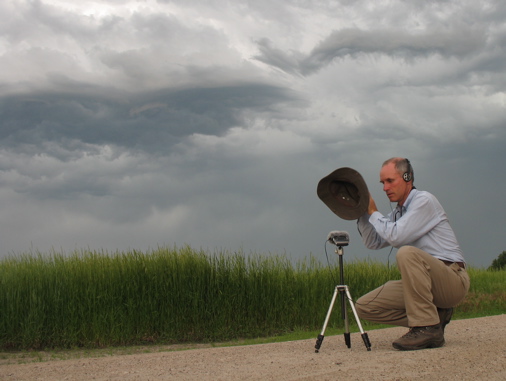 This is gonna be loud: Interviewing a Nebraska thunderhead
Minor Ranch
North of Hyannis, Nebraska

The “Lost Sea Expedition” will be about life on the Great Plains in a mule wagon, present, and way, way past (as in 70 million years ago). It features interviews with farmers, ranchers, native Americans and church goers. All explaining Great Plains life – and why there are so many marine fossils in a land known better for antelope than sharks. Also covered will be life in a mule wagon. The stuff you don’t see unless you inhabit a wagon on the Great Plains through four seasons – things like tumble weed messages, insect migrations, snow storms, flash floods, rattle snakes and dust storms.

Other projects include creating an audio version of the “Too Proud to Ride a Cow” the book that covered an earlier Atlantic to Pacific mule voyage. Initial recordings are under way.

Not that this film and audio work has arrested my travels. Recently, I pried mule Polly away from her best pasture buddy, her round hay bale, for a 6 day voyage to the beach with close friends. 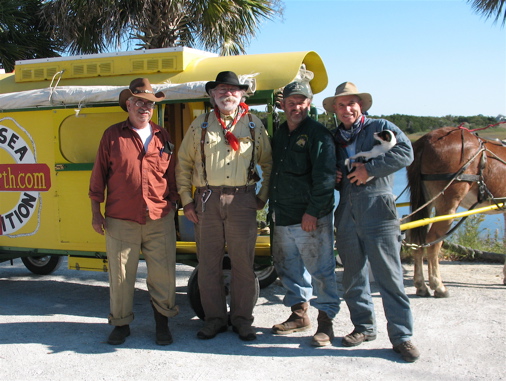 Traveling friends: Billie Stevenson, Ronald Hudson, Kenny Tyndall, Bernie and puppy Rim Shot.
Sunset Beach, North Carolina
(Ronald is mule Polly’s old owner. When I bought her, he told me there was one thing I should know about her. Click here to listen to Tash’s story. )

While no fossils were found in the 135 mile voyage from Southern Pines to Sunset Beach, North Carolina, it did give us a chance to discover some eastern North Carolina linguistic relics. 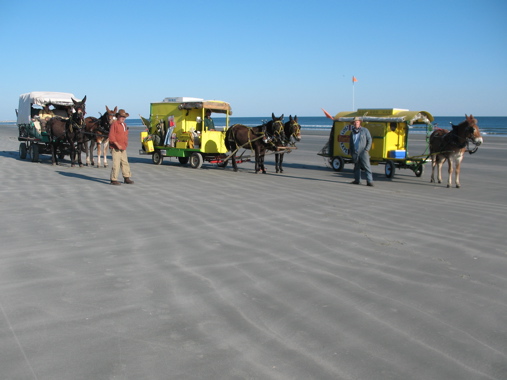 Example. This sentence was overheard in Robeson County, a county in the south east corner of the Tar Heel Sate. Spelled phonetically, it went:
“We gwin mud in six munf.”
Stumped?
It means, “We’re getting married in six months.”

Which, loosely translated, means, well, you get the drift…. But first comes some studio time and the Lost Sea documentary.

See you up the road!