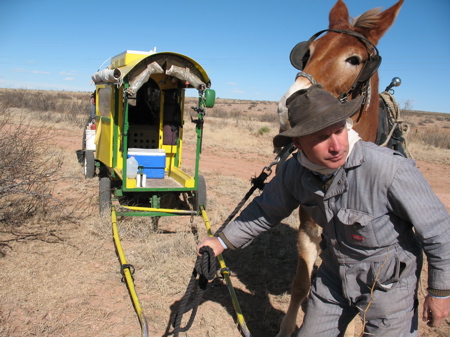 Hitching-up-time (but not much longer)
Outside Artesia, New Mexico

In coming weeks, mule Polly and I tackle the final miles of the Lost Sea Expedition. Click here to find out how you can get a piece of the voyage before it wraps up…. 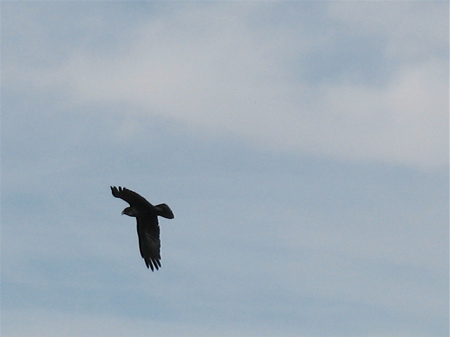 Also, these final miles have turned up some crows with pyro-suicidal nesting habits. Click here for the flaming feathered story… Also, we have a position report straight from the wagon atlas….

Back when I worked in an office, I noted the seasons on paper, with a calendar. That changed when I moved into a wagon and crossed the ancient seabed that spans the middle third of the North American continent.

In South Dakota, Lakota Elder Janice Red Willow explained how the natives marked the seasons using references such as the moon and wild turnip.

In New Mexico, I learned how Sucker Rod uses crows. 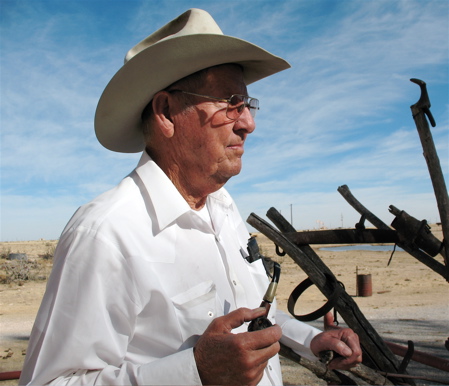 I met Sucker Rod on my 2004/5 voyage across America by mule. Named Sucker Rod after the slim pipe that pulls oil from the ground, I revisited him recently with mule Polly. We got to talking about the seasons, how winter was drawing to a a close. How, come March and early spring, the grass fires would begin.

There were various causes.

First you have dry lightening, where a lightening bolt strikes the grass, but no rain follows so the prairie burns. Then you’ve got cigarettes and trucks with flat tires (the rim drags on the pavement, creating sparks that ignite the dry grass).

Seems they have a self-destructive habit of building their nest in places that cause ignition – to themselves and the grass below them.

Then click on the audio player below to listen to Sucker Rod explain.

After I left Sucker Rod’s place in my wagon, headed west toward Artesia, New Mexico, I started taking a closer look at the power poles that lined the highway. Sure enough, on average, every twentieth one had a crow’s nest. 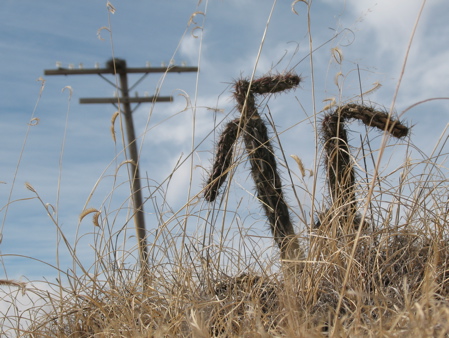 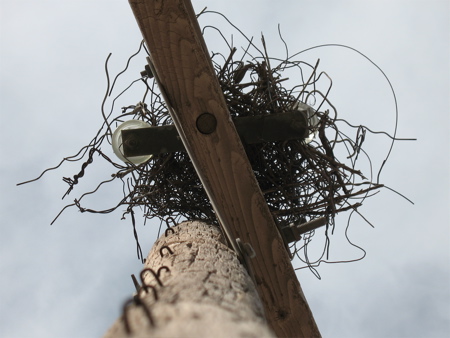