Out here on the Lost Sea, the long-extinct marine life resurfaces in unusual places.

On September 10, 1804, while Lewis and Clark where exploring the Louisiana Purchase, the party came across an enormous skeleton lying on the south side of the Missouri River in Gregory County, South Dakota. Clark noted in his journal, “below the island on the top of a ridge we found a back bone with the most of the entire (length) laying Connected for 45 feet. (T)hose bones are petrified, some teeth & ribs also connected.“ 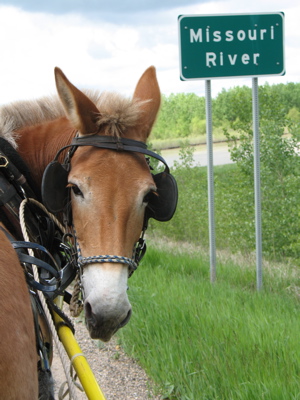 On September 1, 2007, while mule Polly was pulling the Lost Sea wagon from Battle Axe Road to the Mangy Moose Bar, our party came across a three-foot jawbone outside Hill City, South Dakota. I noted in my journal, “below the Lost Sea Expedition mountain-camp, we found a crazy-big jawbone, over three-feet long – lying in a baby bed. Some teeth connected.“ 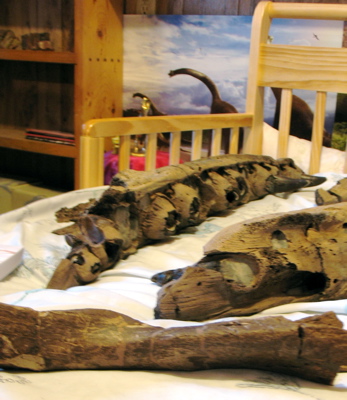 Jaw bone in a baby bed

Feeling puffed-up as Clark about my find, Polly and I proceeded to the Mangy Moose for a drink. (Clark doesn’t note how his party toasted their Missouri River find but I’d wager it was stronger than the orange juice I enjoyed at the Mangy). 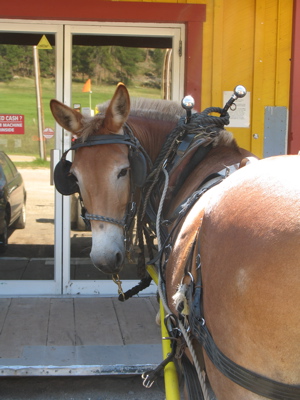 Over my dose of vitamin C (scurvy’s an imagined threat on the Lost Sea yet has driven many a Lost Sea explorer into a bar, where, often as not, he forgots about the fantasized loss of his teeth and switches to beer) I pondered the fossils.

So what Lost Sea fossil did Lewis, Clark and Harberts come across?

In Lewis and Clark’s case, it’s an educated guess. Part of the bones they found in that Missouri riverbank were collected and sent to Washington, DC. There, like many political dinosaurs, they vanished.

Still, based on the detailed description, most paleontologist agree they’d come across a large mosasaur, the same beast that had wielded the jaws I’d found in that baby bed.

A few days later, Jared Hudson, a Black Hills fossil hunter who owns a cast of a mosasaur jaw, shed some light on this toothy critter. 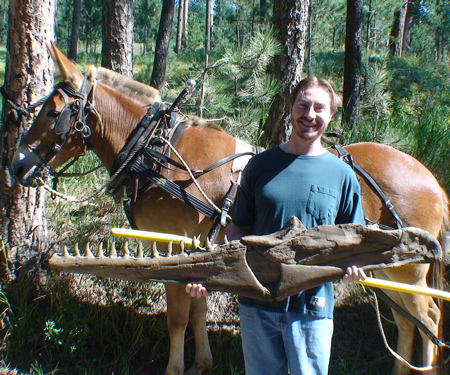 First, the mosasaur was a big, make that huge, reptile related to today’s monitor lizard. No, it wasn’t a dinosaur. Though complete mosasaur skeletons are rare, it’s possible, based on jaw length, to extrapolate their length.

Jared leaned his mosasaur jaw against Polly’s shoulder. Polly stands 57 inches at the shoulder and the toothy mandible projected 4 inches above her shoulder. From jaw tip to jaw joint, the jawbone measured over 5 feet long. 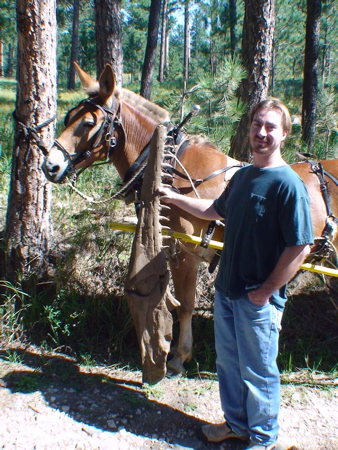 So how long would that have made the mosasaur?

“As a rule of thumb,” Jared explained, “The jaw measured 10 to 15 percent of a mosasaur’s length. So this one would have been around 50 feet long.”

That’s 4 times as long as the Lost Sea wagon. Or, to look at it another way, almost exactly as long as the specimen that Clark described 200 years ago.

Okay, so Lewis & Clark found their found their fossil in a riverbank and I found mine in a baby bed. The difference between then and now? Baby beds have shown up in South Dakota – and we now know a heck of a lot more about the mosasaur then Lewis & Clark did. It’s not, as a member of Clark’s expedition described it in Moby Dick terms, just “a monstrous large Fish”.

ya’ think Atlantis is out there somewhere Bernie?? If anyone could find it, it would be you. You are a lot like Indiana Jones (to me at least!). You my hero sir!!

Hey great hearing from you Al. Indiana Jones had the hat. But I have the mule and a raft. Atlantis is quaking in its seabed. Keep in touch friend! Bernie