If You Caught 'em Smoke 'em 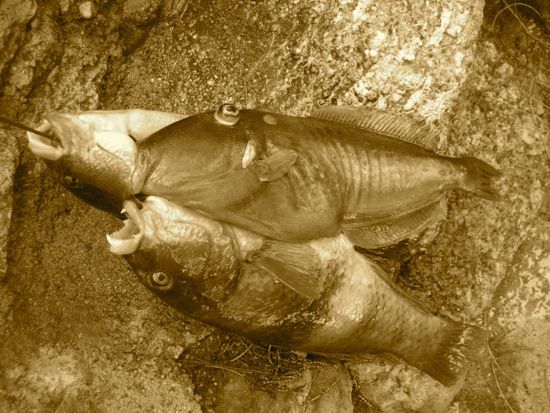 A mess of Tasmanian fish – among them, two wrasse and a leather jacket.

People wonder. How do you live on a bike without refrigeration? It’s as though the Big Chill is some invisible cord that tethers people to civilization.

For most things, it’s not required. Oats, vegetables and eggs don’t cooling if consumed in a timely manner. Milk comes powdered and the taste of a fine whiskey is only enhanced when drunk at outdoor temperature – especially after 8 hours of pedaling.

Which brings up meat. And for that, there’s smoke.

On my bike I carry a hand line. This allows me to catch fish as I travel. Still, sometimes I catch more than I can civilly dispose of in one meal. Which, in the absence of refrigeration, calls for smoking. Not that kind of smoking. The other kind, like with a camp fire.

Here then, in a pictorial essay, is a quick guide to Pedal Power Fish Smoking. 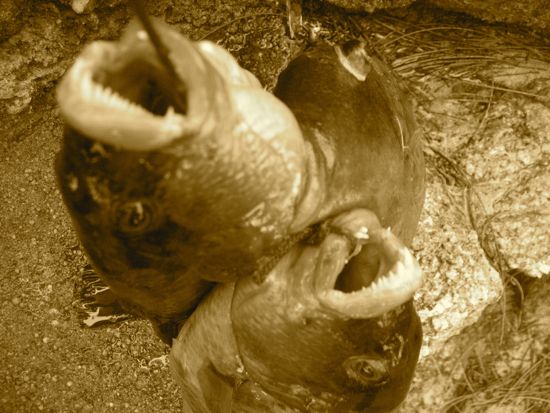 Go catch a mess of fish. Or better yet, see if you can talk someone into giving you some. Doesn’t matter what kind as long as they’re fresh. Not puffer fish, though. They’re deadly poisonous. Cut off the heads and put aside. Fillet the fish, leaving the skin on. Cut into strips the width of two fingers held together. 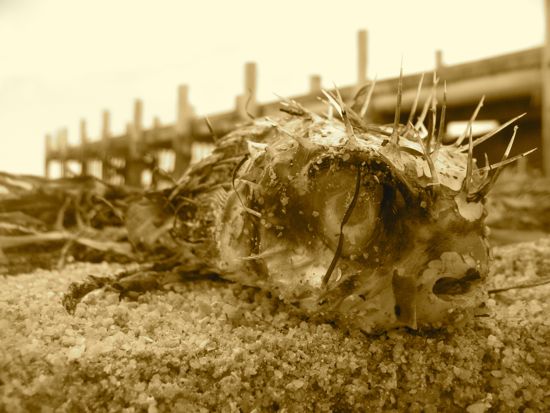 In case you don’t know what it looks like, this is a washed up puffer fish. Also called a porcupine fish. Cleaned properly, it’s considered an Asian delicacy. Cleaned improperly, the poison, tetrodotoxin, can lead to paralytic poisoning. Stick with the wrasse, friend. (Whitemark, Flinders Island, Tasmania) 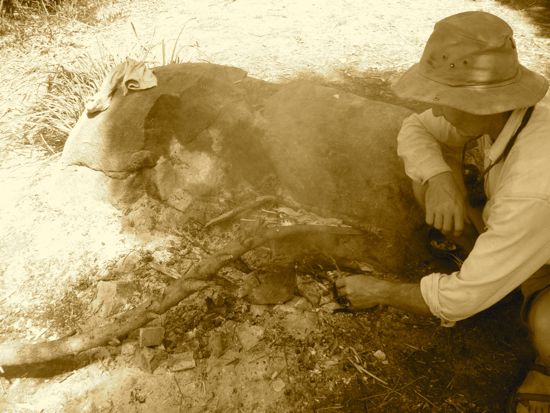 Build a fire. Smoky is fine. In fact the smokier the better. This would also be a good time to pour a drink: tea if it’s earlier, something stronger if it’s later. This whole thing takes a few hours so get comfortable with your beverage. 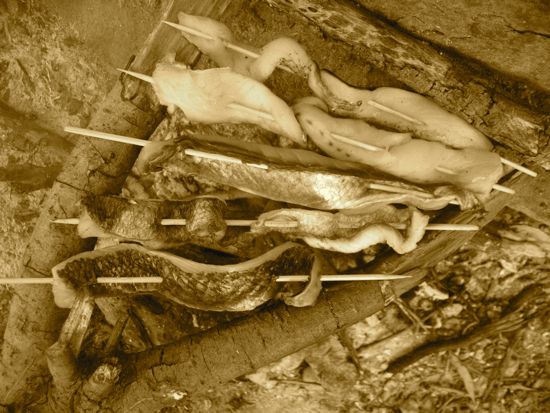 Skewer the pieces of fish on slivers of wood or shish kebab sticks.
Then, when you have good smokey fire going, lay a few larger pieces of wood across it. They should be positioned so they won’t burn. Across these, lay your fish. Yes, at first it looks like snake meat. Don’t be squeamish. 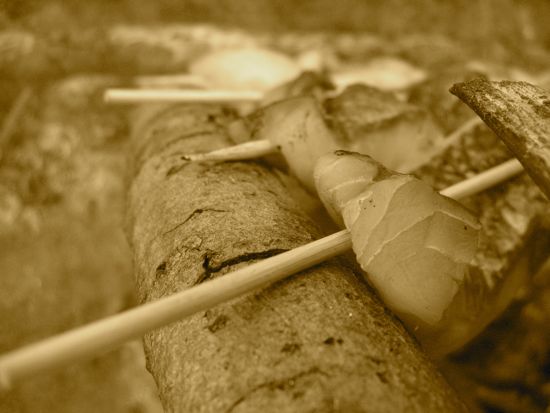 You want the meat to be bathed in smoke but no too close to the heat. Remember, you’re smoking it, not cooking it. If it starts charring, move it farther from the heat. 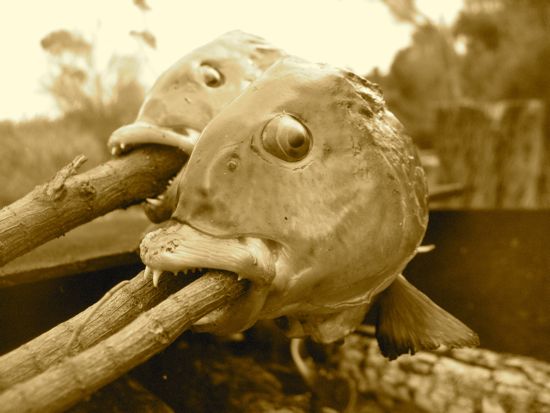 Optional: remove the gills from the fish heads and skewer each head. Be sure to pry the mouth and gills wide so plenty of smoke can enter the head cavity. 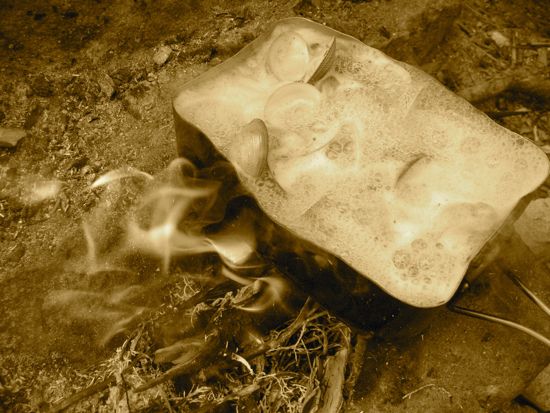 Now it’s just a waiting game. This type of smoking, which is called hot smoking, can take from four hours to a a day or two. I’ve found 4 to 6 hours is plenty to smoke thin strips of fish. If you’re really gung ho, go dig some cockles and boil them up like this. Just be sure someone’s watching the fire. Nothing worse than coming back to camp and finding your precious smoked fish reduced to ash. Bummer, that….. 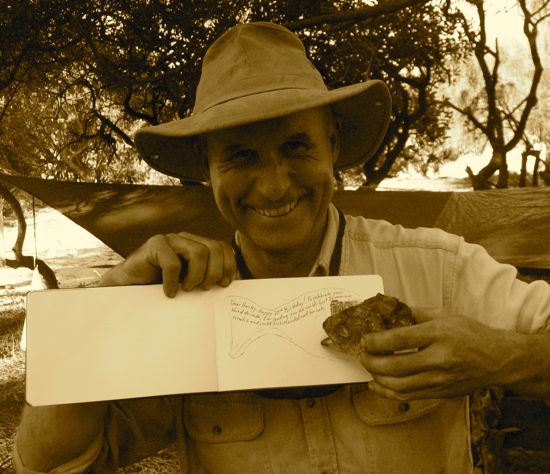 If you’re really bored, write some postcards. In the photo, I’m sending my friends’ 20 year old blind cat a fish-scented post card. Yes, it actually made it’s way through the Tasmanian, Australian and US Postal System. 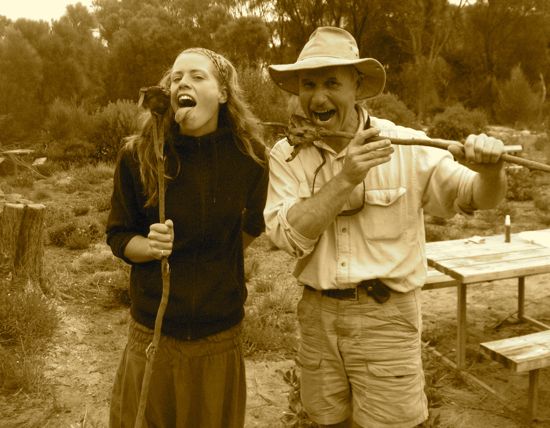 And finally, when your fish are smoked, go find someone who’ll enjoy eating them with you as much as you enjoyed making them. Here, an enthusiastic camp visitor shows how a wrasse head should be disposed off.
Who said you needed a fridge on a bike….?

Glad you found some bush women Bernie! It gets lonely in the outback, or bushback, backbush ….. what do you call it?
Hard to beat a properly smoked fishhead I say!

Seeing the pic of the skewered fish head instantly made me think of them doing a chorus of “I Am The Walrus!”

Taste-wise, is the result better than, worse than or just different from the air-dried fish jerky during your circumnavigation?

Enjoy the rest of your trip! Hope to see you in Oriental this fall.

Bernie, God bless you,brother. We received your post card this week, great to hear from you and glad to read about your latest adventure. We would love to share a meal and tasty beverage with you when you get back to Carolina.