It occurred to me after I razed my wagon that I hadn’t have a clue about how to build a new one.

Then I remembered Vernon Laman. 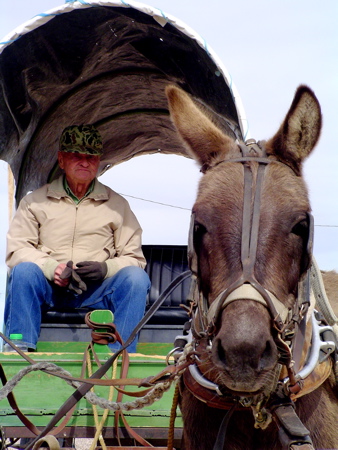 Vernon and Smoky in their home made wagon (Artesia, New Mexico)

I met Vernon in Artesia, New Mexico. He was in his eighties, had driven trucks for a living, and after he retired, he built a wagon out of a twenty dollar VW carcass. He joined us for a day on the road, and when we pulled up that evening I asked him what plans he’d used for his rig.

Blue prints? No way. “I built it around the buggy seat that used to belong to my grandfather.” he told me. Then he gave me some chili peppers that later made me consider castration but that’s another story. 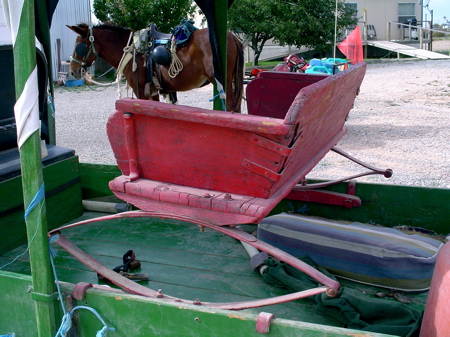 It got me to thinking. After sleeping, the place I’d spend most of my time would be in the driver’s seat. So I snapped up a folding chair, made a few measurements and whipped out my notebook for a quick sketch.

From sitting in that chair, I discovered I needed 3 1/2 feet at the front of the wagon, sort of like a covered porch where I’d sit and drive. That would be enough room for a chair and a good occasional leg stretch. For the cab behind, where I’d cook, write, and sleep, I figured 8 feet would do. Then I remembered that plywood sheets came in four foot sheets so I thought “Hey, make it twelve feet long overall and give yourself 8 1/2 feet of living quarters.” 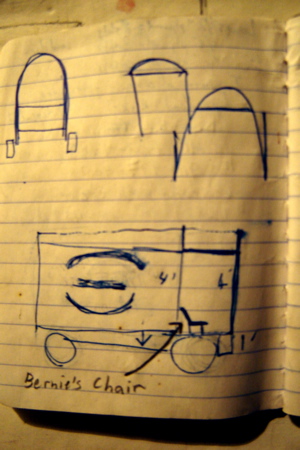 Then came a quick interior sketch.

The sheepherder’s wagon hosted just what its name implies; a shepherd. Before ATVs and ordered fencing, shepherds, especially in the Idaho area, lived in small wagons while they tended their stock. They followed the sheep to fresh grass in these horse drawn accommodations.

Though all were individual, they stuck to generally the same layout; namely, the bed was always in the back and most boasted a wood stove.

I got a fresh sheet of paper and penciled in the bed and stove where I liked it. The bed converts to two seats and a drop-in table. Like on my old boat. The rest of the area I just filled in with counters. 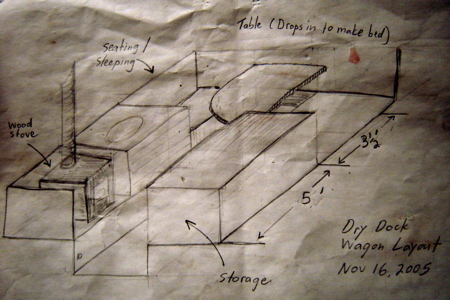 And so now I have two sheets of plans for my new wagon.

Getting off my chair and building the bugger.